Volkswagen: A Cool Concept And A New Diesel Accusation

A plug-in hybrid SUV concept debuts in China, and a PowerPoint presentation points to cheating 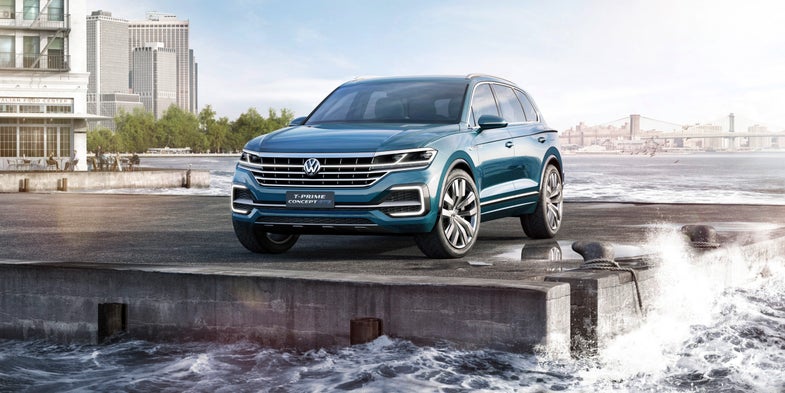 First the good news from Volkswagen. The company debuted the T-Prime Concept GTE, a plug-in hybrid SUV, at Auto China 2016. The bad news: the New York Times reports that a PowerPoint presentation created in 2006 at Volkswagen detailed how to cheat on US emissions tests with its TDI diesel engines.

The T-Prime Concept GTE, to get back to the sunny side of the street, combines an electric motor and a 2-liter four-cylinder turbo gasoline engine for a combined 375 hp and 516 lb-ft of torque. The concept could travel up to 31 miles in all-electric mode, and it gets 29 mpg without any help from the battery. When running in a fully combined hybrid mode, the T-Prime would get 87 mpg.

The concept plug-in hybrid can indeed be plugged in to recharge the 14.1 kWh battery. Using a 220-volt outlet, a full charge takes 8 hours. But at faster public charging stations, the battery can be recharged in 2.5 hours. It also uses regenerative braking for extra energy on the go.

The design of the T-Prime concept is less futuristic than the BUDD-e electric van VW brought to CES. While there’s no word on when this concept might become reality, parts of the T-Prime are slated to reach production, like the Curved Interaction Area that VW says will be in its cars by 2017.

Volkswagen’s future, however, depends on how well it can deal with its diesel-cheating past. Jack Ewing reports in the New York Times that a PowerPoint presentation created at VW in 2006 demonstrated how exactly the United States tested for pollutants in vehicle emissions. The presentation described the predictable pattern used during the tests and how code could change engine behavior to emit less pollution while testing was going on.

According to the report, VW filed court documents as part of the investigation that showed the technicians at the time being skeptical of being caught. There were tests that could be done on the road — which is how VW did in the end get caught — rather than in a lab with predictable conditions, but those real-world tests weren’t often used.