With 18 rotors, the Hexa aircraft has room for just one passenger 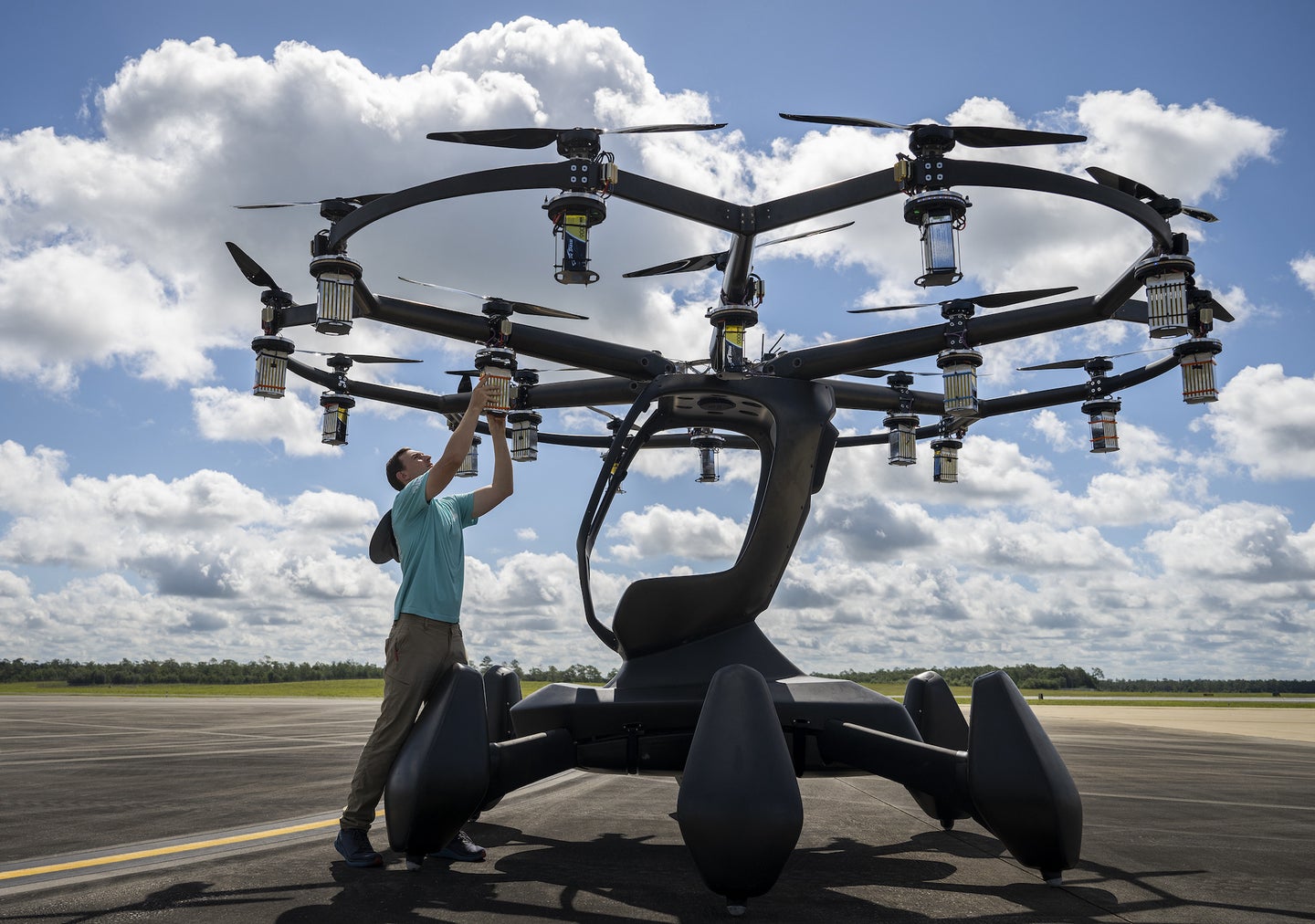 A Hexa seen on July 6 at Eglin Air Force Base in Florida. US Air Force / Samuel King Jr.
SHARE

Fifty feet into the April sky above Eglin, Florida, the drone wobbled, its passenger seat empty. The flying machine is the Hexa, made by LIFT Aircraft. Hexa is an electric, remotely piloted, vertical takeoff and landing aircraft capable of human transport. More than three months after that April 4 flight, the Air Force announced on July 14 that a second Hexa, Hexa 09, had recently completed a flight test, also at Eglin Air Force Base. Run by the Air Force’s 413th Flight Test Squadron, the Hexa flights are a way for the Air Force to learn what the utility of this specific vehicle is, and what vehicles like it might offer the service in the future.

Broadly described, the Hexa is a rotorcraft. The vehicle has 18 electric motors, each powering a separate rotor, in a canopy that looks like what would happen if a DALL-E-style AI was asked to draw a tree in the style of a drone. The rotors sit on a latticework canopy, with a rotor on each of the Hexa’s six arms and 12 rotors spaced evenly around the outer ring. Machines like these are also called eVTOLs, for electric vertical take-off and landing craft.

The Black Hawk and Little Bird both put their size to use as cargo transport for troops, resupply, and rescue, and both can also carry guns, bombs, and missiles, fighting like flying gunships. The Hexa has the capacity for a single occupant, one that is fully optional. In the test flights at Eglin, the Hexas flew under remote control.

Hexa is one of several projects funded by Agility Prime, an initiative specifically to develop electric vertical takeoff or landing (eVTOL) vehicles. Other projects supported by Agility Prime include the Heaviside electric plane, Joby, Archer, and Beta’s Alia.

Air Force testing of the Hexa “aims to accelerate and further develop HEXA for future public and military applications like emergency first response, personnel transport, base logistics, and search and rescue missions,” LIFT said in an April 7 statement.

Those are roles where a small-footprint aircraft offering high visibility could be especially useful. A human passenger acting as a spotter, especially one with access to sophisticated sensors mounted on the airframe, could look for people lost in unfriendly terrain. With the vehicle remotely piloted, the spotter could devote their full attention to looking below, telling the remote pilot where to steer the Hexa. Another advantage of a remotely piloted craft for search and rescue is that a Hexa could be flown empty to where it’s needed, letting a person climb inside while the remote pilot carries them to safety.

For personnel transport, it is easy to imagine the Hexa filling roles both vital and of convenience. A commander skipping the ground traffic to catch a ride to a meeting across base is certainly a possibility, and multiple Hexas could be kept in place, and charging, to ensure they are always available.

Using a Hexa for cargo likely would require cargo that either straps well into a seat, or a different airframe built around the same principle. Here, also, the small footprint of the rotor-lattice, combined with the redundancy of the many engines, could be appealing as an alternative to human couriers.

What is unlikely is that a Hexa built as it presently is will see combat. Remote control is useful for medical evacuation or transporting emergency responders to the injured. But the Hexa’s open sides, oblong profile, and whirring rotors slot it into the long and frustrating history of single-personnel flying transports.

In the 1950s and 1960s, the Department of Defense explored single-pilot rotorcraft that featured soldiers standing on a platform above spinning blades. The Hexa, which keeps people beneath its rotor array, is a massive improvement over that era of design. And, unlike the novelty of jetpacks explored by militaries specifically for combat, the Hexas initial test cases all seem within the bounds of existing technology, without risking catastrophic disaster from use under fire. (Should disaster come, the Hexa boasts a parachute and the ability to land on water.)

With the flight at Eglin, Hexa 09 reached 50 feet in altitude and was airborne for about 10 minutes (Hexa 05, which flew at Eglin in April, also reached 50 feet.) Any useful flying machine will need to fly both higher and longer, but sustained flight is a promising early sign of the vehicle’s potential. If the Hexa can remain as low-cost and easy to fly as LIFT promises and the Air Force expects, the vehicle could become a buzzing part of routine military operations, effectively moving people from place to place with all the flash and dazzle of an airborne Segway.