The bio-containment modules date to the 2014 Ebola crisis. 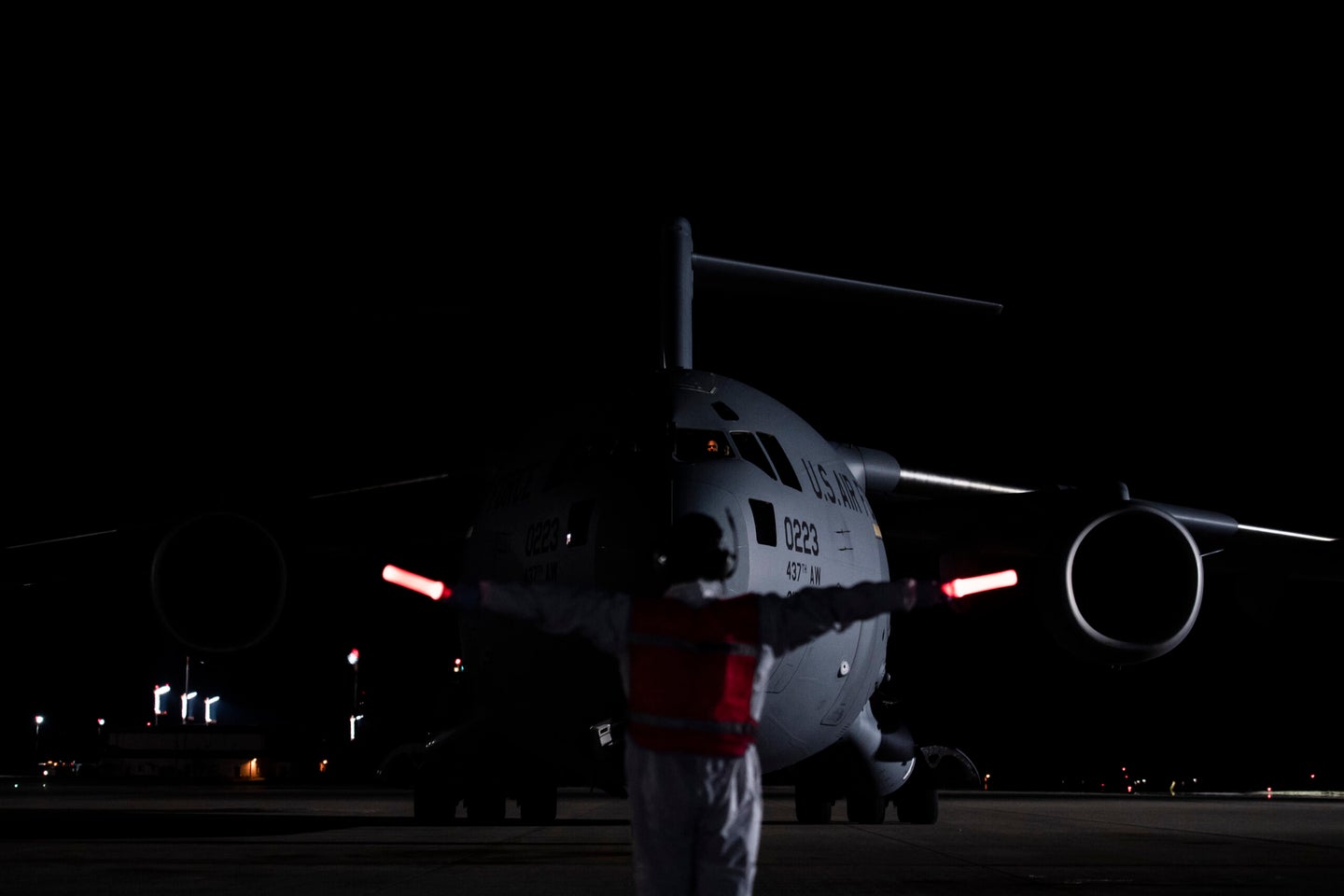 Last week, an Air Force C-17 lifted off from Afghanistan and flew to Germany. On board the large cargo aircraft was an intricate bio-containment system populated by three government contractors who were also coronavirus patients.

The April 10 flight was the first time that the contraption, first developed during the Ebola crisis in 2014 and unveiled five years ago, was used for real. The Air Force calls it the Transport Isolation System, or TIS, and it can move people who are infected with a contagious bug of some kind without giving the contagion to anyone else on the plane, or contaminating the aircraft itself. It’s also designed so that medical caregivers can go in and out, and offers them a place to take off their dirty personal protective equipment before reentering the rest of the aircraft.

Here’s how onboard healthcare workers tend to patients in the system, and how it works.

One TIS is actually made up of three modules: two isolation modules, and an antechamber. The modules are on pallets, like cargo. The antechamber is something akin to the mud room in a house—the proper place to remove any soiled stuff—while the isolation modules it connects to are where the patients reside. On the C-17 flight from Afghanistan to Germany, the Air Force actually flew two complete TIS units, for a total of four isolation modules and two antechambers. Plus, a whole bunch of crew was on hand to help. The patients were dispatched to Landstuhl Regional Medical Center after the flight arrived in Germany.

“It is a negative-pressure system,” says Maj. Donna Eaton, a nurse working at Joint Base Charleston in South Carolina and a trainer for people who work on the TIS. That way, she explains, “all the pathogens stay in the device and do not escape into the air.” In other words, it’s designed so that air flows inwards, not outwards.

When caregivers need to enter the modules to see patients, they can put on their personal protective gear, or PPE, in the plane, outside of the TIS system. To exit, after moving from the isolation modules back into the antechamber, the steps are regulated. “There’s timers in there that you have to hit,” Eaton says. “We have meticulous procedures for people to take off their PPE.”

The modules themselves, she says, can mimic the different levels of care you’d find in a hospital, from something basic—like you’d see on a standard hospital medical floor—to ICU-level. Patients who are ambulatory and can walk themselves will naturally need a different level of attention than someone who is in critical care. Those critical care patients, she says, would show up already “packaged” with the medical equipment they need already connected to them.

And not surprisingly, they stash other emergency medical gear inside the TIS, Eaton says—stuff such as oxygen tubing or simple kit such as a thermometer. They can bring other equipment as needed inside, too, but won’t take it into the contaminated area unless they need to. “We have everything available on the aircraft to take care of any kind of patient and any kind of emergency situation,” she points out.

The entire TIS draws power from one of the C-17s two electrical networks. Any oxygen the patients need also stems from the cargo plane’s O2 system. The antechamber on its own weighs some 1,285 pounds, while an isolation module clocks in at 1,455 pounds, according to an Air Force fact sheet.

While the Transport Isolation System dates to 2014, the Air Force is also working on a new solution dubbed the Portable Bio-Containment Module, notes Air Force Magazine.

These American medical modules are similar in concept to a French flying hospital called the Morphée, which has also been used to transport coronavirus patients. That French system is slightly different in purpose, though—it’s not a bio-containment transport facility so much as an open-plan ICU in an aircraft that can treat a dozen or more patients.

Meanwhile, down at sea level, the US Navy has hospital ships.