Why the Air Force is interested in this little electric plane

The aircraft is Kitty Hawk's Heaviside, and an Air Force Reserve pilot flew one remotely in December. 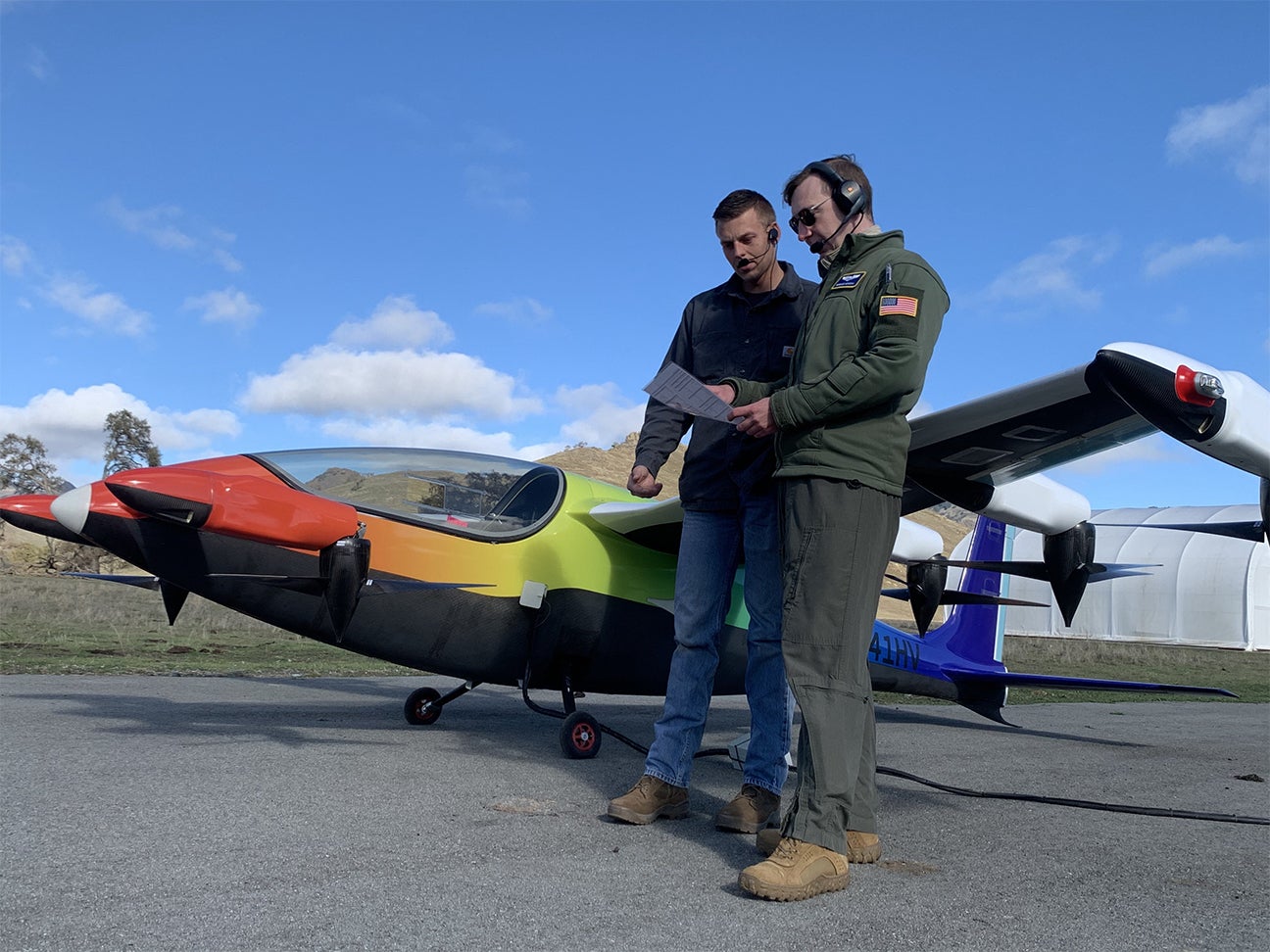 With its rotors pointed towards the ground, the Heaviside plane by Kitty Hawk looks like an almost-complete hobbyist project. As the rotors spun into action for flight testing in December 2021, the plane lifted off and wobbled, looking not unlike a model of a spacecraft pulled skyward by fishing line in an old sci-fi movie.

Once airborne, with the rotors pivoted for forward flight, the aircraft looked as smooth as any other, an elegant machine gently circling a mountain valley just outside Tres Pinos, California. On the landing approach, rotors again pivoted for a descent, the landing appears almost gentle, with just a little of the touch-and-go familiar to helicopter pilots.

The Heaviside electric plane is not quite a drone, not quite a crewed aircraft, and certainly not a flying car, though Kitty Hawk CEO Sebastian Thrun describes it as similar to all three. The vehicle can only transport a single person, it can be remotely piloted, and it has many autonomous features. It is, in its loftiest visions, floated by the company as a way to reduce ground traffic by taking advantage of the open space of the sky.

What makes the December 2021 flight tests so compelling is not just the work on the plane, but that the Air Force was so involved with a civilian craft.

During the flights between December 13 – 17, Terrence McKenna, an Air Force Reserve pilot with the 370th Flight Test Squadron, participated on behalf of Afwerx. Afwerx is a technology accelerator within the US Air Force, designed to explore a range of technologies that could someday be incorporated into the military.

As part of his participation with Kitty Hawk and Afwerx, McKenna successfully flew the Heaviside remotely.

The Heaviside is best thought of as a single-seat transport. It can carry a passenger who weighs no more than 176 pounds, a constraint that means that in the present form, it could carry fewer than half of US adults, including many who meet military fitness standards. The ability to take off vertically and land vertically, thanks to those pivoting rotors, gives the plane tremendous flexibility in where it can travel. Kitty Hawks boasts the plane as having a speed of 180 mph, meaning the Heaviside could plausibly travel from Kitty Hawk’s testing site in Tres Pinos to its headquarters in Palo Alto in about 27 minutes, or about a third the time of a car traveling that same route.

While flying at at least 1,500 feet above the ground, the Heaviside is quiet for an aircraft, with a given noise of just 35 decibels, or “slightly louder than a whisper and about 100 times quieter than a helicopter,” according to Afwerx.

[Related: The Barracuda puts a wild spin on aircraft design]

Helicopters are the default aircraft used for rescue operations, for good reasons: the technology is familiar, refined, and helicopters such as the Black Hawk can carry 11 passengers seated, or 6 in stretchers. Yet helicopters are loud, and require an on-board crew, so it’s possible to imagine a scenario where the military would want to extract a person via a small, silent vehicle.

McKenna noted to Afwerx “that potential military and industry use cases largely overlap for the Heaviside: the aircraft could transport injured personnel, evacuate people from hostile territories, deliver cargo or first aid, make emergency medical services more accessible in rural areas or congested cities, and assist with firefighting or search and rescue operations, among many other potential scenarios.”

Proving the aircraft can work, remotely piloted and silent, is a good first step towards building it into a tool that can someday function as a utility truck in the sky. Aviation history is full of haphazard concepts, with deeply limited capacity, being expanded into useful and almost mundane forms.

Kitty Hawk’s tests of the Heaviside are one of several partnerships with Agility Prime, this one designed to develop a syllabus for how to fly the plane. (Joby, another eVTOL company, is also an Agility Prime partner.) By being involved in the development of the craft and its piloting from the earliest stages, the Air Force can learn the limits and the potential of the technology in real time, leading to a day where the military could start to augment or replace its existing helicopter fleets with electric planes that don’t need runways to take off.

Watch the Heaviside in flight below: