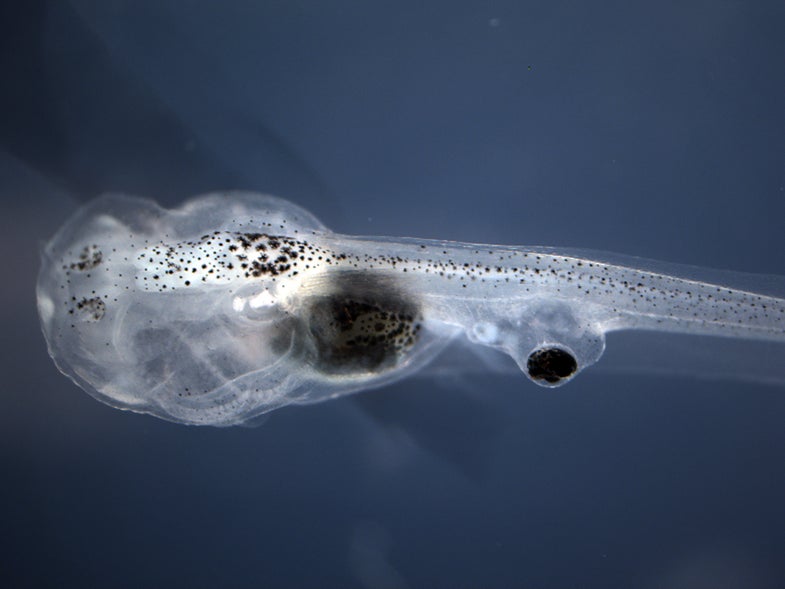 Transplanting a whole eyeball is tough. So tough, in fact, that it’s never been done. For an eye to work properly inside the sockets of a new host, it needs to be connected to the central nervous system by way of the delicate optic nerve, which is easier said than done when both donor and recipient nerve endings have been damaged by the removal of the organ.

But according to research published Thursday in Nature Regenerative Medicine, you might not need to factor the fragile optic nerve into the equation at all. Eyes—and perhaps other sensory organs—can hook up to any available central nervous system port and boot right up, if manipulated properly. Researchers at the Allen Discovery Center at Tufts University were able to give sight to blind tadpoles by grafting eyes onto their tails.

Corresponding author Michael Levin isn’t new to Frankenstein-esque body manipulations. A recent issue of Popular Science featured his work on “re-wiring” frogs to make them grow extra limbs—a feat he believes could one day be translated to the human body. He and his colleagues are studying the way cells respond to the body’s electrical signals, and how those signals dictate their growth and behavior. By tweaking these signals, they hope to help change the human body to suit our needs. The latest study, led by post-doctoral associate Douglas Blackiston and contributed to by undergrad Vien Khahn, asks how those electrical signals can be adjusted to encourage the body to accept a new anatomy.

“We’re asking questions about the plasticity of the brain,” Levin says. “If you do make anatomical changes in the body plan, how can the brain adjust to that?”

Essentially, Levin, Blackiston and their colleagues hope to increase the neurological connection between a donor graft and the recipient’s brain. For sensory organs, this is crucial: the organ needs to have the ability to take in sensory information and send it to the brain, but the brain also needs to be able to recognize that sensory information for what it is. You wouldn’t expect, for example, that an eye attached to the base of the spinal cord would be successful in sending visual input to the brain and having the brain process it as such.

But when the researchers grafted little froggy eyes onto blind tadpole tails, that’s exactly what happened—after a little intervention.

A previous study had shown that, by controlling the electrical state of the eyeball’s new environment, scientists could stimulate a burst of nerve growth and activity. But vision from those eyes was still lousy. In the new study, the researchers took new information about how cells read the electrical environment around them—by exchanging the neurotransmitter serotonin with neighboring cells—and hacked the system. And they did it with a human-friendly drug, to boot: a migraine medication.

“One of the big points here is that there’s this huge toolkit of drugs out there, used for neurological or cardiological issues, that are actually a tremendous resource for regenerative medicine,” Levin says. “So we identified exactly which serotonin receptor was involved and found a drug humans take that activates it.”

While just 11 percent of tadpoles who didn’t get the drug gained color recognition in their new eyes, 29 percent who received the serotonin-influencing medication did. (Only 67 percent of tadpoles with normal eyes managed.) Tests showed that the tadpoles saw not just color, but shapes and movement. Tadpoles with untreated eye grafts didn’t fare much better on the movement test than their blind brethren—38 percent and 32 percent passed, respectively, compared to an 80 percent success rate in sighted tadpoles. But when treated with the migraine drug, 57 percent of tadpoles with grafted eyes were able to follow motion.

“They really had true vision,” Levin says. “This is really remarkable, that the brain, which usually expects visual input from one place up in the head, can take it from a spot on the tail and process it correctly. It raises the question of how the brain recognizes it as visual information at all.”

To Levin, one of the key findings was that the drug stimulated prolific nerve growth for the eyeball’s benefit, but didn’t seem to interfere with nerves in the rest of the body.

“That’s tremendously important, because medically there should be fewer side effects,” Levin says. “You won’t overgrow the normal nervous system. And if you think about it, the fact that the ectopic nerve pays attention while the normal innervation does not suggests these cells actually know whether they’re in the right place.”

Perhaps, he adds, “if you’re an optic nerve sitting out in the flank somewhere, you can tell you’re not in the right place, and so you pay attention to the electrical environment and grow accordingly.” This could have implications in treating certain birth defects or cancers, he posits, where cells that crop up and grow in the wrong place get the body into trouble.

The findings could help produce better outcomes for recipients of donated or lab-grown organs—and not just eyeballs, either.

“I’ve had a lot of people call me to talk about eye transplants, but the important thing to remember here is that it goes way beyond eyes,” Levin says. “The point is to control the neuro-connectivity between any graft and its host. It’s all applicable.”

In theory, a similar technique could be used to slap any organ onto the body with more success.

“We have no idea how we would connect a retina to the brain, and if you wanted to replace an ear, you would have to cut out a big piece of the skull,” Bernd Fritzsch at the University of Iowa, who does similar work but was not involved in the study, told New Scientist. “This work suggests that this might not be necessary—that you could put the organ on the neck, for example, and connect it to the spinal cord. It might look funny, but it could still work.”

And in the long term, Levin says, the work could have wonderfully weird applications in elective bioengineering.

“This is really sci-fi stuff, but one day there will be people modifying their biology beyond the standard human anatomy,” he says. “People may want more eyes, they may want different kinds of eyes, they might want to live on Mars or underwater. And the brain will need to adjust to that.”