This cheap and easy lab-on-a-chip could save lives 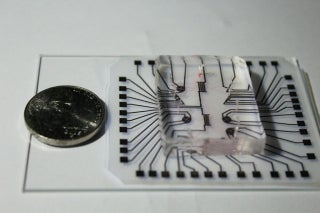 From detecting breast cancer to screening for HIV, surviving serious disease depends on early detection. When regular testing isn’t available, lives are lost. But early detection often requires expensive lab equipment, and specialty training that isn’t easily common in many parts of the world. According to the World Health Organization, breast cancer—the most common cancer in women—has a survival rate that’s roughly twice as high in high-income nations as it is in low-income countries.

“It basically emphasized that we needed to have access to early diagnostic tools,” said Rahim Esfandyarpour, an engineering associate at the Stanford Technology Center.

So Esfandyarpour and a team of researchers at the Stanford University School of Medicine endeavored to do something about it. They’ve developed a diagnostic ‘lab-on-a-chip’ that can be manufactured on the cheap and produced with your run-of-the-mill inkjet printer.

A lab-on-a-chip is a device that integrates multiple laboratory functions—such as DNA analysis—onto a single chip spanning a few millimeters to a few centimeters in size. Like a microchip, it’s an integrated circuit—though Esfandyarpour’s is designed to assess and analyze bodily fluids, not make mathematical calculations.

The concept of a lab-on-a-chip isn’t new. Researchers have been working to shrink complex laboratory processes for more than 20 years.

First, it should be easy to use without much experience, since rural clinics might be short on staff members with extensive medical training. It should be adaptable, capable of testing for more than one disease. And finally, it should be cheap to account for the scant funding and modest public health infrastructure in some developing countries.

To achieve this, Esfandyarpour and his team developed a two-part system. The first is a clear, silicone microfluidic chamber. The chamber is a clear sheet in which small amounts of the test sample (blood or other cells) are placed. In other lab-on-a-chip contraptions, the silicon chip is etched with designs. In Esdandyarpour’s version the chip is left blank. That’s where the second part of the system comes in: using nanoparticle ink, healthcare workers imprint a circuit design onto a piece of flexible plastic that costs as a little as a penny. Nanoparticle ink might sound fancy, but it’s often found in circuit drawing kits designed for children.

When the silicone chamber is placed atop the plastic strip and an electrical field is applied to the printed circuit, cells located in the microfluid chamber get pulled in different directions depending on their “polarizability”—their ability to separate out into positive and negative charges.

Precisely how the cells behave depends on the kinds of cells placed in the chamber—cancer cells, for example, behave differently than healthy cells—and on what design is printed onto the electronic strip. So for example, one strip design could screen for breast cancer, while another detected AIDS. Technicians wouldn’t necessarily need to create the designs themselves. If the idea takes off, they could just print previously-created designs via an existing template. And because the system is contactless, each electronic strip can be reused. In addition to clinical applications in poor nations, the chip also frees researchers with tighter budgets to experiment.

“It gives you the freedom to not only use it for diagnosis, but for basic and applied research as well,” said Esfandyarpour.