The explosive science of fireworks, explained 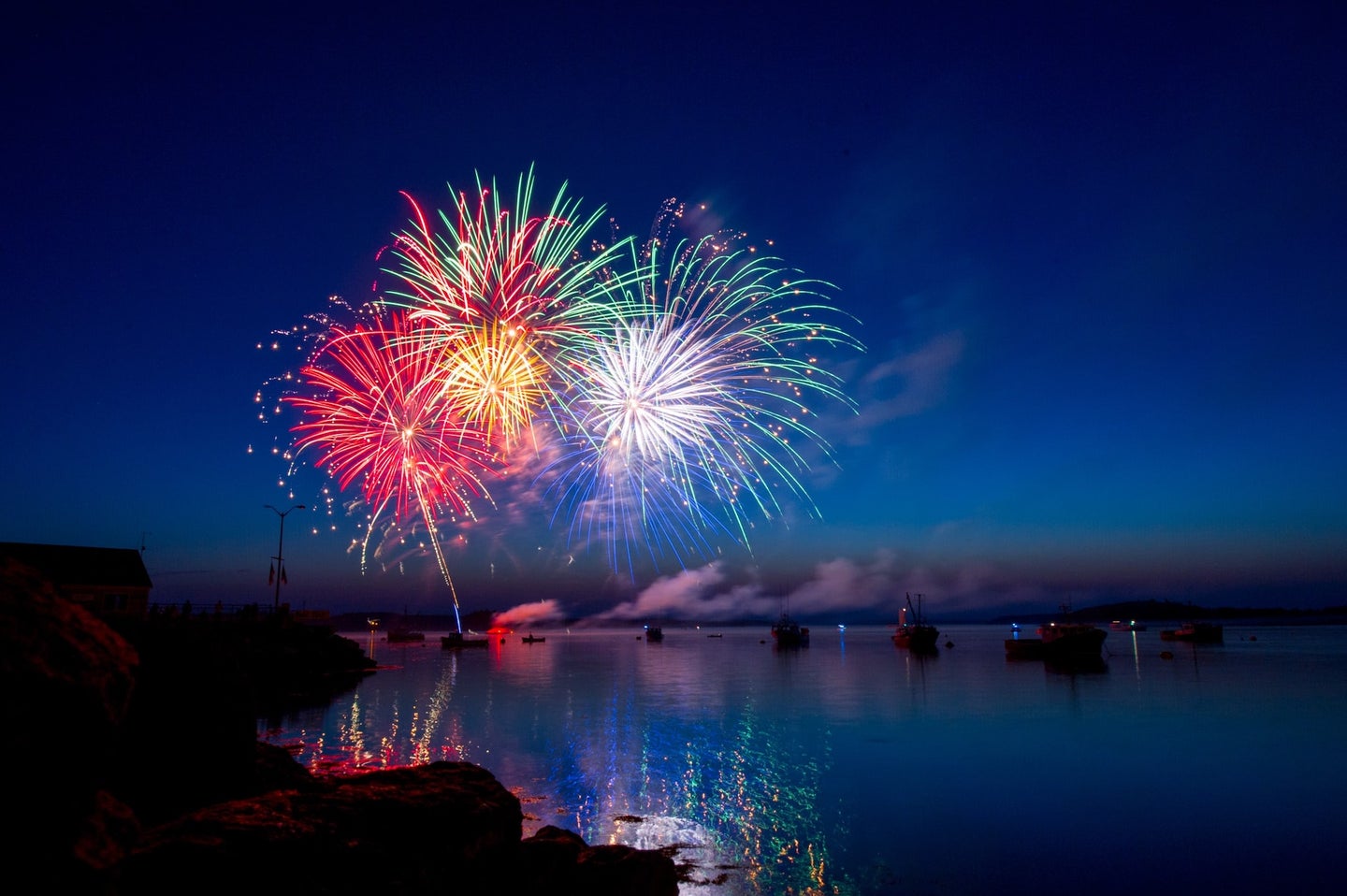 Understanding how something works makes it even more beautiful. Photo by Ray Hennessy on Unsplash
SHARE

This post has been updated. It was originally published on July 2, 2017.

It’s an age-old tradition: Millions of Americans, from infants to the elderly, attend fireworks shows for the Fourth of July. There’s nothing quite as patriotic as sitting out on a blanket and watching hundreds of explosions light up the sky in honor of your country’s birthday. But how do fireworks work?

Well, we’re here to arm you with some fun facts about the most patriotic science: pyrotechnics, the chemistry of explosions. It’s perfect for showing off smarts at your Fourth of July barbecue.

How do fireworks work?

Aerial shells are powerful and versatile spheres of explosives and added chemicals. On the outside, all you can see is their grapefruit-sized paper casing and the fuse. But their insides are packed tight with the individual components required to create all the effects that mesmerize us.

The most basic duty of a firework is to ascend into the sky and explode. That takes just two main ingredients: an oxygen-rich chemical (known as an oxidizer, like potassium nitrate) and a fuel to burn (sulfur and charcoal are often used). These chemicals are combined to form black powder, which has been used since the earliest Chinese fireworks as a propellant to shoot the shell into the air and as a bursting charge for the actual explosion.

The bulk of the aerial shell is composed of marble-sized “stars,” chemical pellets that create the specific burst effects. The bursting charge fills the rest of the space in the shell, smartly separated from the black powder that propels it into the air. After all, no one wants the shell to explode immediately.

For a launch, the shell is placed in a mortar, a tube that directs it in the right direction and at the right angle. When the lit fuse reaches the lifting charge at the base of the shell, the burning gunpowder provides the momentum for the shell to shoot into the sky. The amount of gunpowder can control how high the shell ascends.

Meanwhile, an internal fuse—reaching from the lifting charge to the center of the explosive mass of the shell—has also been lit to time the actual explosion. When the fuse burns to its end, it ignites the bursting charge, igniting the stars and throwing them into the sky. These are the outward-expanding bursts that we ooh and ah over. The shell burns up, and all that’s left to return to the ground are the charred remains of the paper shell (so don’t worry, a properly-exploded firework won’t return to Earth and land on you).

Now, let’s look at these bursts themselves. We’ve seen red, white, and blue fireworks on the Fourth of July, or hearts at weddings. How do you control the color and shape of a seemingly unrestrained explosion?

The colors actually come from chemicals in the stars. Some metal compounds emit colored light when energy is added to them (say, from an explosion). A handy guide to the chemical rainbow is below:

Blue is one of the most difficult colors to produce, said John Conkling, who was an emeritus professor of chemistry at Washington College. (Sadly, Conkling passed away in 2021, and a recent fireworks show was held earlier this month in his honor in Maryland.)

Recent advances in firework chemistry have helped create more vibrant blue hues (a necessity for a successful display of Fourth of July patriotism).

Next, the fireworks assemble into various shapes and formations through a surprisingly simple technique: the stars are attached to a piece of paper in the shape of the desired pattern. Trying to make a smiley face? Just lay down a circle of stars with a few extra in the center to form the facial features.

“It takes a lot of testing,” Conkling said. “You have to figure out exactly how to place them so that the shape or pattern in the sky is what you want it to be.”

Sometimes the way the firework explodes is also important. Fireworks that just pop in the air create a very different effect from the ones that crackle as they fade away, or the ones that slowly fade as they arc through the sky like willow branches. There are a lot of possibilities for these effects, so the artist determines what they’re trying to see, and go to the chemist to make it happen, Conkling said.

“Fireworks are our medium, like paint,” says Phil Grucci, president and CEO of Fireworks by Grucci. “It’s what we use to create images in the sky.”

The next step is to actually design and execute the show. It’s a tall order: it can take months to design, test, and set up a display, but in just 20 minutes of showtime, it all explodes into the night sky. There’s no trace of the time and manpower that went into it. But in this business, that’s a sign of success.

Grucci is the fifth generation of six generations to have been involved in Fireworks by Grucci, a family-owned fireworks company in New York. He’s currently gearing up for one of their two peak events: the Fourth of July. (The other, as you might guess, is New Year’s Eve.)

Clients hire them as a one-stop shop to orchestrate shows. They do design work at their office in Bellport, New York, on Long Island (and also have a facility outside Albany); manufacturing and testing happens at a leased army ammunition plant in Radford, Virginia. “Military explosives have had a great synergy with pyrotechnic manufacturing,” Grucci says.

Next, the designers go to the site to look at the space they’re working with: Is there water? Are there buildings? Some sites are stranger than others; Fireworks by Grucci did a show in Dubai off the side of the Burj Khalifa, the tallest building in the world. The site details are put into a design software, and then custom 3D visualization software is used to simulate the design and timing of the fireworks. They can preview everything from height to color, even smoke. Grucci thinks of individual fireworks as a cast of characters, and the process of designing a show requires casting these characters into roles that appear at different times and interact, all on a massive stage—the sky. It takes about two hours to design each minute of the fireworks show (so to plan a typical 20 minute show, it takes 40 hours, or roughly one workweek).

With their vision in mind, the pyrotechnicians from Fireworks by Grucci are able to actually set up the routine. Performances have a minimum of three pyrotechnicians, but the crew can often have upwards of 250. Computers precisely handle the launches these days. (That wasn’t always the case: The older way was to light the fuses by hand, with a torch, and the subsequent method was using switches to fire them electronically.)

“There are a lot of moving parts to get to the point where you’re ready to push the ‘go’ button,” Grucci says.

The future is bright

What could fireworks look like the future? Well, looking back at their history, they might not change much: Conkling said that fireworks have fundamentally remained the same over their millennia-long history, though advances in chemistry have made new effects and brighter colors possible. Fireworks by Grucci’s “pixel bursts,” for example, use microchips to control the height of the explosion. Researchers are also trying to make fireworks less smoky and more environmentally friendly. Grucci has developed a new case that looks like plastic, but is actually a starch-based polymer that will biodegrade more quickly. That new case is being used in some instances now.

“It’s an absolutely intriguing area of science,” Conkling said. “The sky’s the limit.”