The ocean didn't break it down— it only made it stronger. 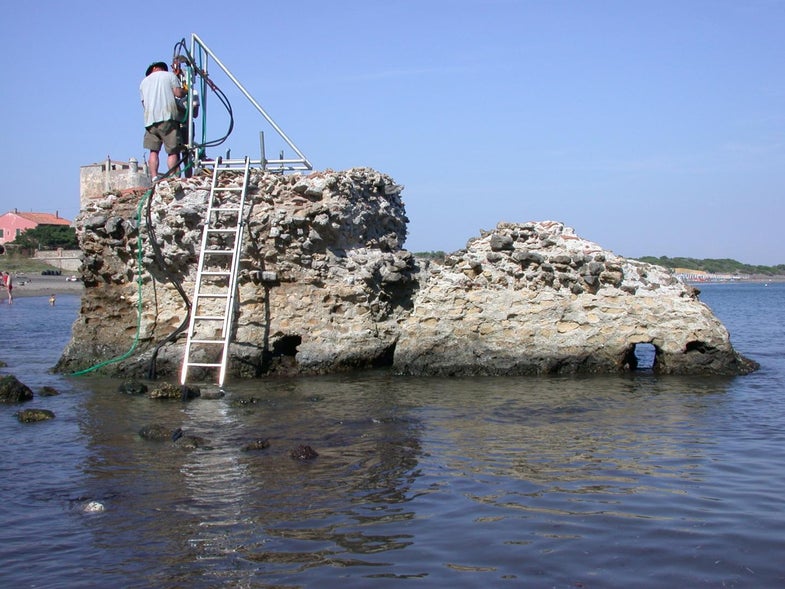 Drilling into a Roman-era seawall in Tuscany. J.P. Oleson
SHARE

What have the Romans ever done for us? Yeah, yeah, they gave us sanitation, roads, aqueducts, public order, wine, and education. But then they couldn’t be bothered to write down the recipe for their insanely durable concrete.

So here we are—2,000 years later—slogging our way along with Portland cement-based concrete, building bridges and seawalls that are constantly damaged by the corrosive motion of the ocean. Meanwhile, Roman seawalls and harbors just sit there, smug, sturdy, and blatantly mocking our technical abilities like they have for thousands of years.

But we’re onto you and your concrete secrets, Romans. In a paper published this week in American Mineralogist, an international team of researchers unveiled part of the Romans’ recipe for success.

Part of the success comes down to materials. There are plenty of ash-spewing volcanoes near Roman territories. (Yeah, I’m looking at you Vesuvius.) Like many scientists do today, researchers back then also took their cues from nature, and noticed that some ash near these volcanoes could harden into a rock called tuff that was, yes, very tough.

Way back in 30 B.C., a Roman engineer and architect called Vitruvius noticed that when you combined tuff with ash, lime (the building material, not the fruit), and seawater, you started getting really strong concrete. The mixture created a chemical reaction called a pozzolanic reaction, which could give off heat (about 150-200 degrees Fahrenheit) for two years after the concrete was poured.

In some cases, we still use a similar system to make concrete today, taking advantage of the chemical reaction’s ability to strengthen the resulting mixture by creating new minerals and filling up small voids. But that still didn’t explain the sheer durability of the Roman version, especially in seawater. Instead of breaking down under salty, corrosive waves, the material seemed to get stronger.

That’s a surprise because seawater tends to be better at tearing things down than building things up. Given enough time, water can carve huge canyons in the Earth, and seawater in particular is full of minerals and salts that can eat away at structures and boat hulls.

By drilling into Roman structures and analyzing the samples in a synchrotron beamline at Lawrence Berkeley National Laboratory, Jackson and colleagues found evidence that when seawater permeated the concrete, minerals in the seawater reacted with minerals in the ash, forming minerals like Al-tobermorite and phillipsite.

“No one has produced tobermorite at 20 degrees Celsius [68 degrees Fahrenheit],” Jackson said in a statement. “Oh—except the Romans!”

The result: concrete that strengthens over time, in some of the toughest conditions for construction on Earth.

We still don’t know the exact formula for Roman concrete—it remains entirely lost to history—but Jackson is working with colleagues to create an analogue.

“Romans were fortunate in the type of rock they had to work with,” Jackson said in a statement. “They observed that volcanic ash grew cements to produce the tuff. We don’t have those rocks in a lot of the world, so there would have to be substitutions made.”

Currently, they’re looking to use ash and seawater from the western United States in their new mixture. If they succeed, the concrete won’t be perfect for use in all situations. When first poured, the concrete is much less strong than modern concretes used in buildings, etc. But it could be valuable for structures that are designed to have extremely long lifetimes in the sea, like renewable power stations, or for storing hazardous waste—including nuclear material—for long periods of time.