Back to the (genetic) roots 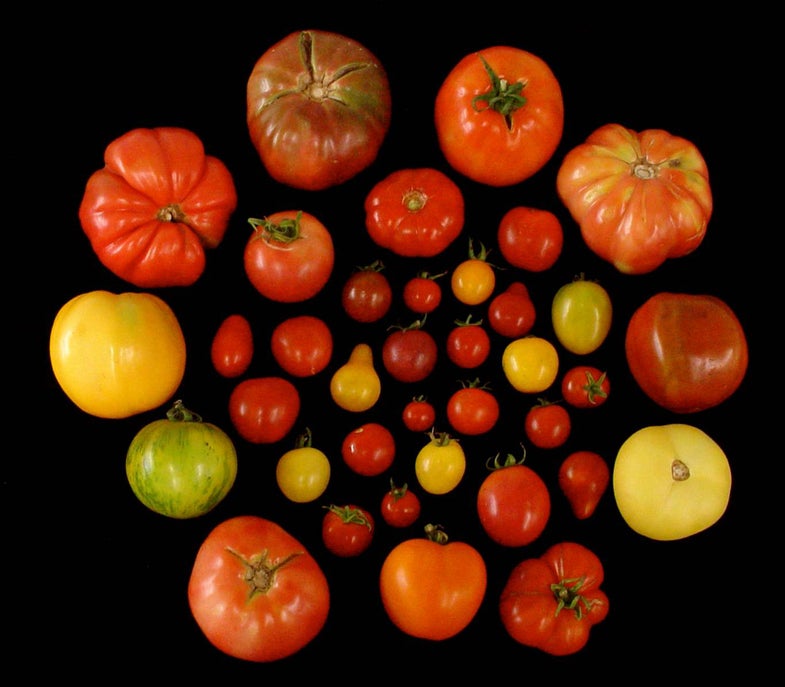 Just as there is nothing better than biting into a raw, ripe tomato picked from the heirloom plant in your backyard, there is nothing worse than the mealy, watery, flavorless slice of tomato that so many people settle for everyday on sandwiches around the world.

In a paper published today in Science, researchers announced that they’ve figured out which genes control the complexities of tomato flavor, and say that they can re-introduce flavor to the commercially-grown tomatoes of the world. Researchers have known for a while that favoring shape, size, and stability in commercial tomato varieties has led to a loss of taste, but now there might be a way to fix it.

Biologist Harry Klee of the University of Florida has studied tomatoes for 22 years, and worked on this project with colleagues, including Denise Tieman, lead author of the study, since 2005. “This is a culmination of over a decade of asking one very difficult question; what is flavor?” Klee says.

Klee and his colleagues conducted extensive research, performing taste tests on 101 varieties of tomato, and chemical and genetic analysis on 398 different varieties —from tiny, sweet, wild varieties, to multi-colored heirlooms, to the commercially-favored modern tomatoes grown primarily for their yield, size, and ability to be shipped the long distances from field to supermarket.

Unlike other fruits, like bananas, there’s no one volatile compound or chemical that screams ‘tomato’. “What we found is if you look at what is flavor in a tomato, it’s a cumulative thing. I draw the analogy to a symphony; it’s a lot of notes and instruments that come together,” Klee says. He and his colleagues identified 13 different volatile compounds in heirloom and wild varietals that weren’t present in the more modern tomato plants, then identified the genes that controlled those compounds.

The hope is that they can reverse-engineer flavor back into the tomatoes by cross-breeding existing tomato plants. Of course, flavor is complicated, and there’s no accounting for taste.

“Culture actually has a huge impact on our taste preferences,” Klee says. “I’m extremely worried that we’re raising generations of young people who have never experienced a really good tomato.”

When an undergraduate working on the project selected a supermarket-bought tomato from the taste-test lineup as her favorite, saying that it was just like the tomatoes her mother bought, Klee was exasperated.

If you’re a tomato fan and think that tasting tomatoes all day sounds like the best job in the world, be warned; there is such a thing as tomato fatigue. “In all honesty, I’m kind of sick of eating plain tomatoes,” Klee says. He still loves cooked tomatoes, caprese salads, and the flavor of a raw tomato with a sprinkle of salt. But in flavor tests, the researchers must eat the fruits in their purest state. “To me, eating an unadulterated tomato isn’t so much fun anymore,” Klee says.

Nonetheless, the research will continue. Klee and colleagues are already working on the breeding program that will eventually create a more flavorful tomato. “If we choose our genes wisely, which I think we have, I think we can deliver a product that tastes substantially better in about two years,” Klee says. It might take an additional year or so for growers to start adopting the plant, but Klee hopes that it could get out to the public in three years.

Klee points out that it could be done even faster with genetic engineering, simply snipping out the desired genes and putting them in a modern tomato plant. “To some extent the anti-GMO movement—even though I am strongly opposed to it—they have kind of won the battle in the sense they’ve priced out people like me. It’s too expensive,” Klee says. He estimates that it would cost millions of dollars and the legwork of overcoming multiple regulatory hurdles to bring a genetically modified tomato to the public, even if the end product is the same as the one he would get by breeding tomato plants. Instead, he’s slogging through a traditional breeding process similar to the ones that Gregor Mendel used in the 1800s. Klee does have some technology that Mendel didn’t. Once the new plants are bred, Klee and colleagues can quickly do genetic tests on the resulting plants and figure out if the plant has inherited the desired flavor traits, no taste-test required.

Klee applauds tomato breeders for doing an excellent job in selecting out the traits that the market demands, and hopes to ultimately make their lives easier. “The ultimate goal here is we want everyone to use this technology,” Klee says. He hopes that this research will serve as a toolkit for any breeder who wants to improve flavor while keeping the size, sturdiness, and yield prized by growers.

But making the more flavorful tomato is only the first step. Consumers, known to gravitate towards the least expensive option, will have to vote with their wallets to keep flavorful tomato options on market shelves.

“The next time you’re in the store, you might consider paying a little more for a more flavorful tomato,” Klee says. If you do, you might find that the tomatoes of the future taste a little sweeter.