New heat-resistant ceramic can be squished like a marshmallow 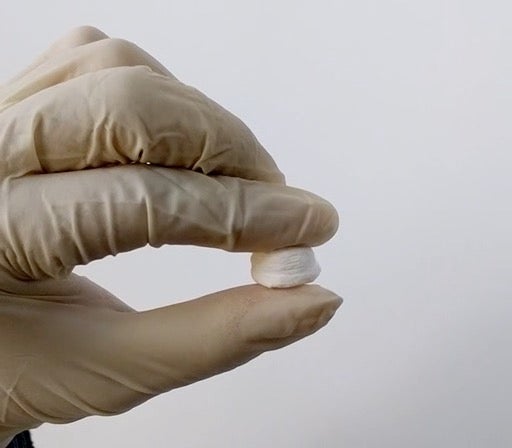 It’s light enough to balance on a fuzzy blade of grass, incredibly heat-resistant, and can be squished like a marshmallow. It’s also a ceramic.

In a study published Friday in Science Advances, researchers describe a new kind of ceramic sponge that can be manufactured quickly and economically, with none of the fragility that comes with a typical consumer ceramic (like bathroom tiles or ceramic unicorns).

Ceramics are an attractive material for use in many manufacturing fields because they’re usually strong, if somewhat brittle, and suited for a variety of products. Recently, researchers have invented ceramics that store and release heat, transparent, strong ceramics that can be used in armor, and even ceramics that bend.

Still, this new material sets itself apart. It’s super lightweight, thanks to tiny nanofibers of ceramic spun together into a sponge. Instead costlier, more time-consuming methods like 3D-printing or electrospinning, researchers at China’s Tsinghua University developed a method of production called solution blow-spinning. How it works: ceramic solution is blasted out of a tiny nozzle into a spinning cage, where it accumulates like thin threads of cotton candy. The resulting product is light and fluffy, and looks like a cotton ball. Or a marshmallow.

When you squeeze the ceramic, instead of staying rigid or breaking, it squishes down and then rebounds back to something resembling its original form.

“The basic science question we tried to answer is how can we make a material that’s highly deformable but resistant to high temperature,” Huajian Gao, a corresponding author of the paper, said in a statement. “This paper demonstrates that we can do that by tangling ceramic nanofibers into a sponge, and the method we use for doing it is inexpensive and scalable to make these in large quantities.”

The engineers made the sponge out of a few different kinds of ceramics, including titanium dioxide and zirconium dioxide. Ceramics like these are known to be pretty good insulators, so the researchers decided to test its heat resistance.

They took flower petals and placed them on a variety of materials, including iron, aluminum oxide foam, and the new zirconium dioxide ceramic sponge. After 10 minutes atop a heating element heated to 752 degrees Fahrenheit, the petals on all the other materials had burned to a crisp. But with only about 7 mm of material between the petal and the hot plate, after 10 minutes atop the sponge, the petal had only wilted slightly.

Not only that, after an hour on the hotplate, the temperature at the top of the sponge only reached 200 degrees Fahrenheit. The researchers hope that the heat-resistant properties could make this material an excellent insulator, and potentially even be worked into firefighter’s clothing, where being weight, flexibility, and heat resistance are paramount.

Other bendable, fireproof ceramics have been made before, but those were more like tissue paper than cotton balls, and were focused more on electronics than other applications.

The sponge’s airiness has other benefits, too: A titanium dioxide ceramic sponge can hold up to 50 times its weight in water. It can actually clean that water as well, reacting with sunlight to remove particles. In some modern water filtration technology, titanium dioxide removes contaminants from water in its powdered form, which is hard to reuse. But in the new sponge form, the compound can still break down an artificial dye in water after just 15 minutes under a light. After treatment, clean water can be wrung out, and the sponge can be used again.

You’re not going to be seeing ceramic sponges on shelves next to your normal dish sponges any time soon–this study proved that these materials can be made, but it will be another step before they can be commercialized and applied.