Turn Your Smartphone Into A Solar Panel

And let the device recharge itself 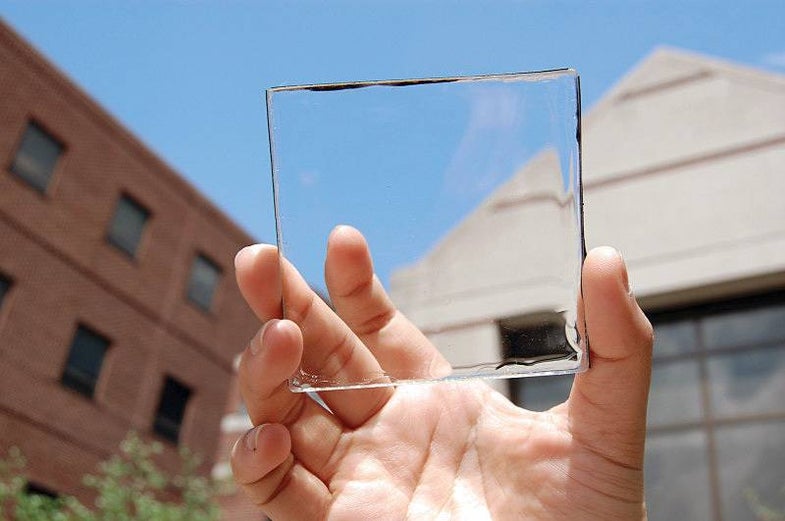 Instead of searching for an outlet to keep your phone alive, what if all you needed was some sunshine? An MIT startup has created a transparent coating that transforms surfaces into solar panels.

Typically solar panels soak up photons from the sun’s rays and convert them into electricity. The panels tend to be dark, because the darker a material, the more visible light it absorbs. The idea of transparent panels would usually get dismissed because they don’t, by definition, absorb any visible light—it just passes right through them.

Ubiquitous Energy, a spinoff of MIT, has created a coating made of organic molecules that absorb the sun’s ultraviolet and infrared rays. Since the light isn’t in the visible range (for humans), the coating appears clear. The material doubles as a semiconductor: When photons hit the surface, they excite electrons that flow as an electrical current to power the device.

“You can put the coating on anything and turn it into an electrical source,” says company founder Miles Barr—smartwatches, phones, windows, or even cars. When the tech is mature, Barr anticipates it will convert solar energy into electricity with 10 percent efficiency—two-thirds the industry average for solar panels. Who doesn’t want an excuse to spend more time at the beach?

This article was originally published in the January/February 2016 issue of Popular Science, under the title “Solar Panels for Every Screen.”

Correction: The credit for the above image with the caption “See-Through Solar Panel” was previously credited to MIT. However the image is courtesy of Richard Lunt who used to work at MIT but now works for Michigan State University. The credit has been updated to reflect that.