From the archives: The promising new world of solar power—in the 1950s

In the March 1954 issue of Popular Science, we explored the auspicious and suspicious new ways of harnessing the sun's energy. 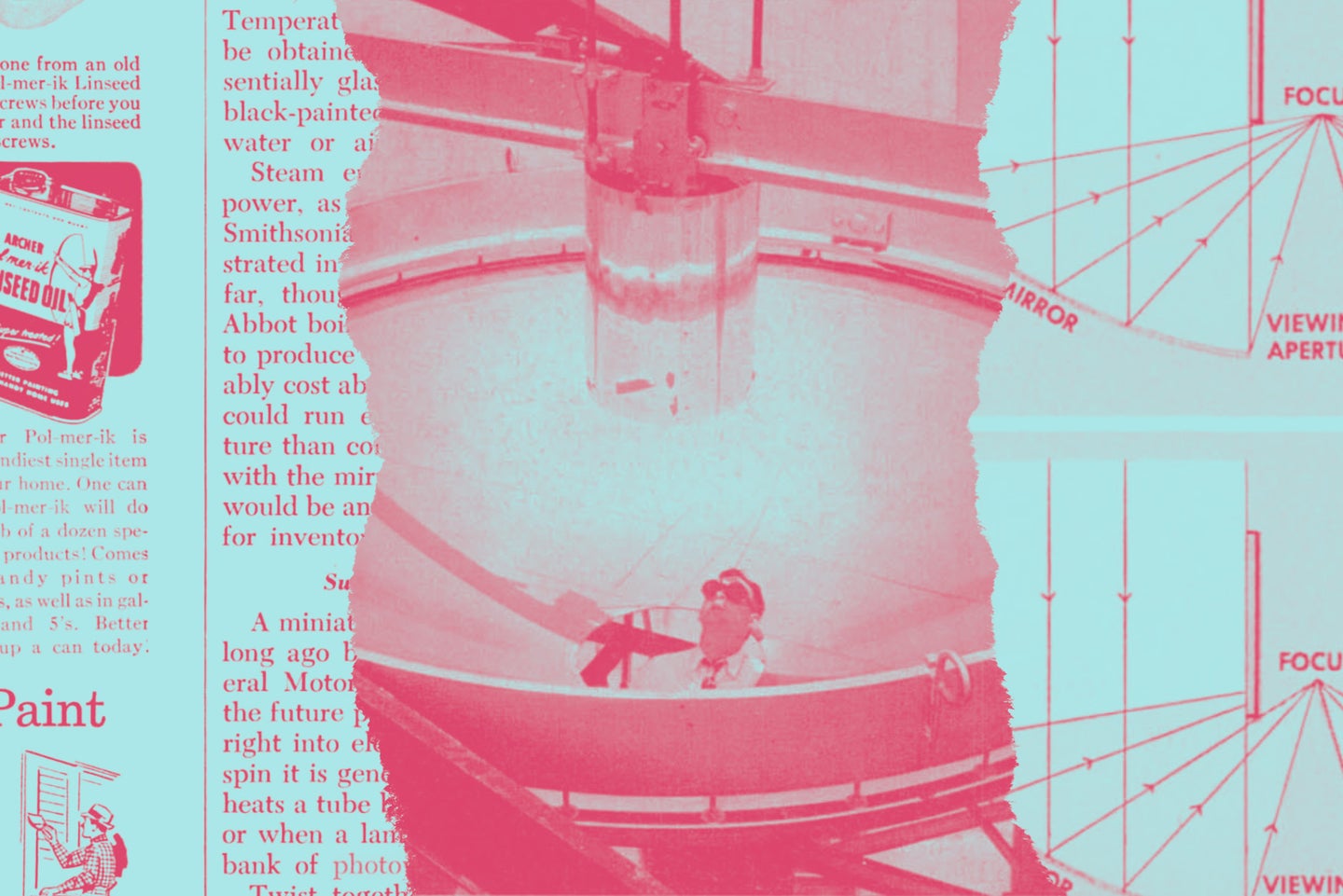 Tapping the power of concentrated sunlight dates to antiquity. During the Siege of Syracuse in 212 BCE, legendary Greek mathematician Archimedes invented a solar death ray. Its polished bronze shields reflected sunlight walls onto approaching Roman ships to set them aflame—a feat that has been replicated in modern times.

By the time Popular Science published Alden P. Armagnac’s “Sun Furnace Goes to Work” in March 1954, the prolific writer and editor was well into his four-plus decades-plus of covering the science beat. No stranger to telling sweeping stories with a flare, Armagnac, a chemical engineer from Columbia University, sought to make science entertaining. He neglected to mention Archimedes in his tour of solar technology, but he does cite Lavoisier, a renowned 18th-century French chemist who used sunlit mirrors to melt metals.

Armagnac’s sun-drenched feature covers an array of emerging solar technologies, including a furnace in which “steel melts and drips like sealing wax over a flame;” photovoltaics, whose electric yield was so wretched in 1954 that a skeptic said, “Scientists must understand matter and energy much better before we can count on charging our automobile batteries from thermoelectric or photoelectric generators on the garage roof;” photosynthesis, used to grow a high-yield, single-cell algae food crop, about which Armagnac doesn’t mince words, “if our palate isn’t progressive enough to fancy such ultramodern fare, we can feed it to cattle or poultry, and be rewarded with old-fashioned steaks or fricassees;” and finally, sunlight-in-a-bottle, or capturing rays in test tubes to tap its catalytic characteristics: “Sunlight is known to produce various chemical reactions,” wrote Armagnac, “as when it turns blank ﬁlm into a portrait of Aunt Ella.” Guess he wasn’t a fan of drinking UV light to cure disease.

A man-made inferno tries out materials for jet and rocket engines—and shows one way to capture free solar power.

A solar furnace newly installed there focuses the sun’s rays, with a 10-foot-diameter mirror of polished aluminum, upon a spot smaller than a dime. It surpasses by far the temperature of the hoc test blowtorch or electric furnace.

Researchers of the Consolidated Vultee Aircraft Corporation apply the sun furnace’s terriﬁc heat to materials under trial for jet and rocket engines and for guided missiles. Aim of their experiments is to develop substances more resistant to heat and thermal shock than any yet known—stuff that won’t soften and ﬂow, say, when a long-range missile screams back to the earth from dizzy altitudes.

That the possibilities are promising is shown by recent discovery of two super-refractories, hafnium carbide and tantalum carbide, with fantastically high melting points—7,530 and 7,020 degrees F., respectively. The first looks like the record for any substance known. For comparison, iron melts at a mere 2,800 degrees, and tungsten tops the list of metals at 6,100 degrees; while graphite, long the supreme heat-resisting material, turns from solid into vapor at about 6,600 degrees.

The California experimenters’ solar furnace, essentially an enormous burning glass, provides the most practicable way to explore this newly opening extreme-high-temperature realm. When sky conditions are ideal, it yields an estimated maximum of 8,500 degrees F. At the focus of the great mirror, this heat is concentrated in a spot 5/16 of an inch in diameter.

Its intensity burns a hole in ﬁrebrick with ease. Steel melts and drips like sealing wax over a flame, when a rod is held with its tip at the focal point. A movable cylindrical sunshade controls the temperature of thousands of degrees to within a degree or two, a triumph of precision. Equipped with an astronomical drive, the big mirror turns automatically to follow the sun, permitting experiments of hours’ duration.

Best of all, pure samples of materials can be subjected to the searing heat without contamination by foreign substances, like carbon in electric furnaces. And there are no electric and magnetic fields, nor fumes, to disturb reactions or hinder spectroscopic observation.

In going to work for industry, the solar furnace has exchanged academic robes for overalls. For its advantages long were appreciated only by savants of pure science. Lavoisier and other great chemists of the past melted metals with solar furnaces, which made up in size whatever their lenses or mirrors lacked in optical perfection. Then the idea seems to have been forgotten, until recent years.

Abroad, French experiments that began a few years ago with a 78-inch searchlight mirror (PSM Aug. ’50. p. 122) have now led to what is probably the world’s largest solar furnace. Using a 40-foot diameter composite mirror, a mosaic of small panes of window glass, this semi-industrial installation in the Pyrenees went into operation in 1952.

In this country, ﬁrst practical use of a solar furnace appears to date back only a little earlier, to a little-known project of World War II. A 120-inch sun furnace was built for the AC Spark Plug Division of General Motors at Flint, Mich. with the cooperation of the Aluminum Company of America. Originally 16 reﬂecting sectors of quarter-inch sheet aluminum gave it a saucer-sized hot spot of up to 2,000-degree temperature and five-inch diameter. After the war, when it became surplus, it was moved to Rockhurst College in Kansas City, Mo., and used in scientiﬁc studies by its designer, Dr. Willi Conn. Having reshaped the mirror to obtain a smaller hot spot and much higher temperatures, he perfected the technique of controlling and measuring the extreme heat accurately.

This is the sun furnace that Consolidated Vultee has now purchased, modified further to suit its new tasks, and put to work. Incidentally, moving the furnace southward in latitude from Kansas City to San Diego required a new mounting for the big mirror—it turns in its gimbals ring, like an astronomical telescope, on a “polar axis” parallel to that on which the earth turns.

To scientists looking into the future, solar furnaces illustrate just one of many ways to harness the sun. The tantalizing fact is that a full horsepower of solar energy, free for the taking, falls at midday on each square yard of the earth. What progress experimenters are making toward capturing it was recently reviewed by Dr. George R. Harrison, dean of the MIT School of Science.

Devices using the sun’s heat directly, as the solar furnace does, represent the simplest approach and the most successful to date. India has perfected a solar cooker; which a government agency now sells for $14, using a circular mirror of yard-square area. Solar stills on life rafts make drinking water from sea water. Experimental solar houses, heated mostly or entirely by the sun, show promise, and will look much more interesting if the necessary investment—still higher than for an ordinary heating plant—can be reduced. For heating homes and hot water, mirrors or lenses aren’t needed. Temperatures up to 400 degrees F. can be obtained in flat-plate collectors, essentially glass-covered boxes lined with black-painted metal, through which water or air circulates to be heated. Steam engines can be run on solar power, as Dr. Charles G. Abbot of the Smithsonian Institution has demonstrated in his pioneering experiments. So far, though, it’s an expensive way—an Abbot boiler with a mirror large enough to produce two horsepower would probably cost about $1,000. Heat engines that could run efficiently at lower temperature than conventional types, dispensing with the mirrors’ cost and complications, would be another story. That’s something for inventors to work on.

A miniature “sun motor” exhibited not long ago by Charles F. Kettering, General Motors research ace, demonstrates the future possibility of turning sunshine right into electricity. Enough current to spin it is generated when a candle flame heats a tube bristling with twisted wires, or when a lamp’s beam is directed on a bank of photovoltaic cells.

Twist together the ends of pieces of copper and silver wire, heat one of the two junctions, and current will be generated. This is the effect that a thermocouple applies to operate the temperature-indicating meter of an electrical pyrometer. Voltage and current can be multiplied to substantial ﬁgures, by connecting many thermocouples and heating one set of junctions. So it’s easy, in imagination, to picture a solar power station where acres of thermocouples turn the sun’s rays into free kilowatts. The catch is their notoriously low efficiency as energy converters, although improved thermocouple alloys have lately raised the ﬁgure considerably.

Unlike photocells that merely control current from an external source, photovoltaic cells actually generate current, when light falls upon them. Camera fans’ light meters employ photovoltaic cells, while a selenium or copper-oxide cell of this type may convert as much as 12 percent of light of some wave lengths into electricity, its low overall efficiency compares with that of a thermocouple. Eventually the ﬁgure may be bettered but, as Dr. Harrison comments wryly, “Scientists must understand matter and energy much better before we can count on charging our automobile batteries from thermoelectric or photoelectric generators on the garage roof.”

There remains the chemical route to harnessing solar energy—tried and proved by nature, long before man came along to puzzle over the problem. All but five percent of the energy we use, including the coal we burn and the food we eat, has at some time been stored by photosynthesis in plants, which captured it from the sun. Can We do better than plant wheat, or corn, or sugar cane, on farms and plantations, and let nature take its course? Some think so.

It may have been a preview of the future when a crop consisting of 100 pounds of dried, microscopic plants was harvested at Cambridge. Mass., not long ago, for the Carnegie Institution of Washington.

The odd product consisted of myriads of single-celled algae of a kind called Chlorella. They had been grown in water containing suitable salts, circulating with carbon-dioxide gas in a plastic tube, while sunshine poured in through the tube’s walls.

Experts predict an acre’s yield of food could be multiplied manyfold by growing Chlorella in tanks, instead of planting the soil at all. The dried or frozen product, we’re assured, forms a nourishing paste with “a delicate grassy ﬂavor.” And if our palate isn’t progressive enough to fancy such ultramodern fare, we can feed it to cattle or poultry, and be rewarded with old-fashioned steaks or fricassees in abundance.

Cerium salts get into the act

Finally, the chemists are talking about bypassing biological processes entirely and capturing sunshine right in ﬂasks and test tubes! Sunlight is known to produce various chemical reactions, as when it turns blank ﬁlm into a portrait of Aunt Ella. More promising for delivering useful quantities of energy is a photochemical reaction exhibited by salts of cerium dissolved in water, which Prof. Lawrence J. Heidt of MIT has been investigating.

The cerium salts’ ions can take on two forms, called cerous and ceric. When sunlight acts on the solution, they change from one form to the other-and then back again. This might seem to get nobody anywhere. But, in the process, some of the water decomposes into elementary hydrogen and oxygen. The overall result is that, with the cerium salts playing the role of catalyst, sunlight breaks down water into gasses that can be burned for fuel.

We’re still a long way from drawing the plans for a solar-powered gasworks. One percent would be a generous estimate of this reaction’s efficiency in converting solar to chemical energy. But it’s a break-through on a new front, one more promising approach for future experimenters to explore.