What it really takes to power your home for a day 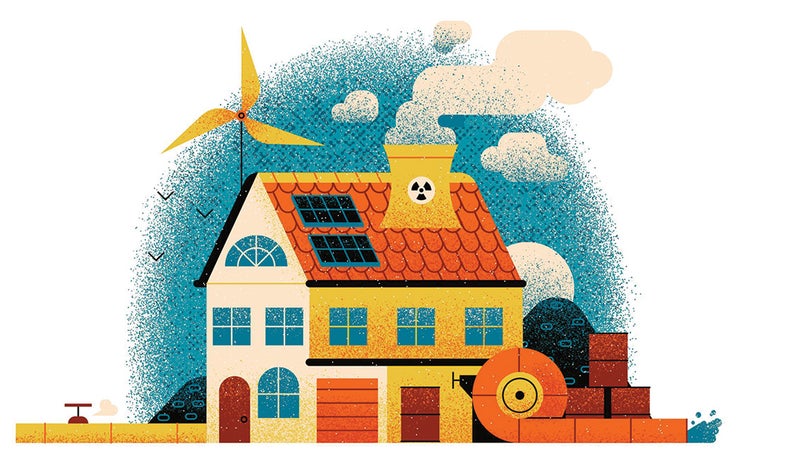 Pound by pound and gallon by gallon. Muti-Folio Art
SHARE

Like any good consumer, you’ve filled your home with power-thirsty screens and toasters. And they make your average American abode chug 30 kilowatt-hours of electricity every single day. (A kilowatt-hour, by the way, is 1,000 watts used over one hour. But you knew that.) Producing your daily juice requires various amounts of gas, coal, oil, wind, solar, water, or nuclear fuel, depending on your energy sources. But what if your home relied on just one of these? Here’s how each of them would measure up.

Solar panels
You’d need: 450 square feet
One 300-watt, 18-square-foot solar panel can transform an average day of California sunshine into 1.2 kilowatt-hours. So you’d need to screw about 25 of them onto your Hollywood roof to cover one spin of the globe.

Natural gas
You’d need: 324 cubic feet
This stuff burns cleaner and cheaper than coal, and it’s plentiful (thanks, fracking), which is why it recently topped all other electricity sources: 34 percent of what we consume. You would need about 41 bathtubs full each day.

Wind
You’d need: 54 seconds
Given a strong, steady wind, a typical turbine can spin out 2 megawatt hours of electricity per hour. Keeping the lights on and the Netflix streaming for a full 24 would take less than a minute. What a breeze.

Water
You’d need: 24,000 gallons
Pouring a 640-square-foot swimming pool of water through the Hoover Dam’s turbines would produce your daily electrical consumption in less than a second. That makes hydro our most productive renewable.

Enriched uranium
You’d need 0.02 ounces
Nuclear fission packs an insane energy punch. It would take just a tiny amount of uranium—less than a paper clip weighs—to turn water into the steam that spins the turbine that ultimately produces the day’s juice.

Oil
You’d need: 3 gallons
This energy-dense fuel drives most of our cars, trucks, and jets. In 2016, however, it accounted for the least portion—1 percent—of residential electricity. A house run on oil would slurp six two-liter soda bottles’ worth daily.