Telematics, a mash-up of telecommunications and informatics, is the science of scanning the world with wireless devices to extract data,... 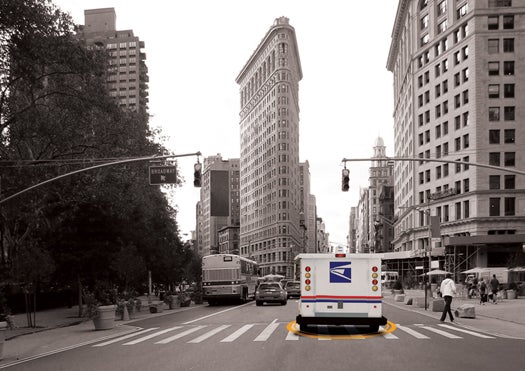 Telematics, a mash-up of telecommunications and informatics, is the science of scanning the world with wireless devices to extract data, sending this data to a computer network, and using the information to do anything from tracking packages to monitoring the highway speed of grocery trucks. UPS relies heavily on telematics, as does GM with its OnStar navigation system. The federal government could do a better job of capitalizing on the science, according to Michael J. Ravnitzky. So he started thinking about one of the largest mobile networks on Earth: the post office.

Ravnitzky is a chief counsel at the Postal Regulatory Commission, the government agency that oversees the U.S. Postal Service. The post office is in bad shape. From 2006 to 2009, mail volume dropped by 17 percent; the USPS lost $8.5 billion dollars last year, and officials have threatened to cut Saturday service. But where others see an inefficient and increasingly outdated system, Ravnitzky sees opportunity.

With its 218,684 vehicles stopping at more than 150 million delivery points along some 232,000 routes every day, the postal-delivery fleet could be reconceived as a vast data-gathering network. “If you were designing a data collection system from scratch, it would look a lot like the postal service,” Ravnitzky says. As he reasoned in a New York Times op-ed last December, the postal network could be used to measure air pollution and ozone levels while aiding Homeland Security operations by scanning for biological or chemical agents. Or it might detect and report WiFi and cellular dead zones. Using telematics, the postal service could evolve into an entirely new kind of public utility. It could also provide a new source of revenue. Private companies or other government agencies could buy space for their sensors on mail trucks.

Although Ravnitzky’s idea is just that—an idea—there’s precedent: Two years ago, 32 Greyhound buses rigged with sensors set off across the country to gather atmospheric and environmental data for the National Weather Service; 2,000 more such buses will roll out soon.

There’s already real interest in Ravnitzky’s plan. Marc Chapman, a compliance director for Atmos Energy, the largest natural-gas distributor in the country, says he is looking into whether sensors could be attached to postal-service trucks to detect gas leaks. Telematics might just save Saturday delivery.