The Paralympic Games begin in South Korea on March 9. 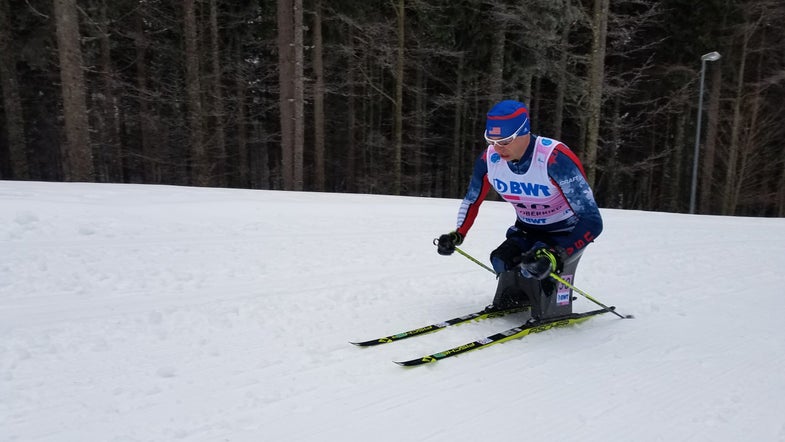 After an IED explosion in Afghanistan in 2005, Andy Soule had both legs amputated above the knee. But Soule, a former Army Specialist, will nonetheless compete as a cross-country skier in the Paralympics in PyeongChang in March, as he did in Sochi in 2014. Soule, and other members of the Paralympic Nordic team with physical impairments, connect their bodies to their skis using a custom-made contraption called a sit-ski—a piece of equipment akin to a wheelchair but with no moving parts, an interface between the body and the same kind of skis any athlete would use.

On a sit-ski, Soule propels himself down the trail using the strength of his arms and core. That’s different, of course, from the way that cross-country skiers traditionally interact with the snow: In freestyle events, they skate down the trail, and up and down hills, by pushing off the snow at an angle with their skis, the tips far apart and the tails close together. In the more classic form, they keep their skis parallel, and cruise that way, like being on a snowy elliptical machine.

Not all members of the Paralympic Nordic team use sit-skis—two visually-impaired athletes ski with a guide in front of them, and two others who are each missing an arm also ski upright. Cross-country skiing is a demanding, exhausting sport, and these athletes are doing it despite physical impairments.

That sit-ski, of course, is a key piece of equipment for the athletes who need one. And it’s an understatement to say that John Farra, the director of nordic skiing for the U.S. Paralympics, is passionate about making the sit-ski setup the best it possibly can be. “This [project] has consumed me for three and a half years,” Farra says.

His first order of business after starting the job in 2011 was to develop a standardized system for connecting the athletes’ sit-skis to their actual skis, so that it was easier to change the planks as snow conditions demanded it for any member of the team. Previously, the connection system had just been ad hoc. “I walked around at that first World Cup like a spy,” he says, “and I literally took a picture of every single athlete’s [sit-ski] frame.” He finished that project before the games in Sochi in 2014.

But what also consumed him was that the sit-skis, previously made out of steel or aluminum frames, were relatively simple. “It just seems crazy that there’s no technology put into these,” he remembers thinking.

That changed for him in 2014. “We were at a World Cup in Germany,” he says. “And I walked by the Ukrainian wax cabin, and I saw these two beautiful, sexy, eye-catching carbon-fiber frames.” He’d never seen anything like them. “It blew me away. Of course, I took picture after picture.”

The big upside with the carbon fiber gear is that it is lighter than metal—by a lot.

It was too soon before those games in Russia to do anything about upgrading their sit-skis yet, though. So he set a goal: “We will not show up to the next games without the best, lightest, fastest—and frankly, sexiest—frames possible,” he recounts. He’s using the word “sexy” intentionally—the carbon-fiber gear is much more attractive than the old metal set-ups. “It’s a factor for athletes,” Farra says, “who train their butts off.”

So while previously the paralympic skiers on Farra’s team were racing on sit-skis made out of aluminum or steel in Sochi, now, heading into the Paralympic Games in PyeongChang, five of them will have modern carbon fiber equipment he’s worked on developing.

“These frames are at least half the weight of the frames they were in Sochi with,” he says. The carbon fiber, which is more flexible and supple than metal, even allows the athletes to carve their turns more smoothly. And of course, less weight translates into faster speeds, he says.

Soule, who will compete in both cross-country skiing and biathlon in March, says that the new sit-skis are a key upgrade. He says his old steel frame was more than 10 pounds, and estimates the newest one is a third the weight. “It’s a very important change,” he says.