5 Technological Solutions To Save The Struggling Postal Service

The USPS has announced it will stop delivering mail on Saturdays. Here's how technology can rescue the floundering agency. 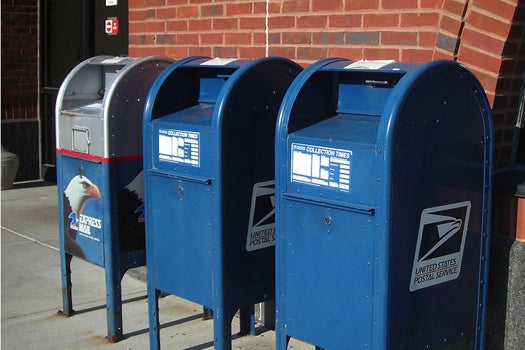 The United States Postal Service will cease delivering mail on Saturday beginning in August, but will continue delivering packages. The cut will save the struggling carrier $2 billion a year.

That’s a hefty chunk of change for the Postal Service, which lost $16 billion last year. Technology got us into this mess — ah, the convenience of email and paperless billing — and technology could help get us out of it. PostalVision 2020, a conference dedicated to figuring out the future of the post office, will host speakers like Google’s “chief Internet evangelist,” Vint Cerf, at its third iteration this April.

Here’s a few tech ideas we’ve seen recently that we politely propose the agency could chew over.

1. Turn Letters Into PDFs
Back in 2010, Finland announced it would start a pilot program to convert snail-mail letters into PDFs to be viewed online. As of August 2012, their electronic inbox NetPosti had 400,000 users. Earth Class Mail, a U.S. company, also processes your mail and packages and sends you images of what’s arrived. Other services will process an email, PDF or Word document for you and send it via regular mail.

2. Move Mailboxes Online
In late October, Australia Post launched a state-sponsored email inbox where they can receive government communication as well as some bills. The free service is expected to save money by reducing paper mail. It hit some technical blips after its launch, but is now accepting registrations again. Digital Post Australia, a private company, is also working on a digital mailbox expected to launch this year. The Israel Postal Company launched iPost, a secure electronic inbox, in 2010.

In January, the Guardian reported that the Postal Service was working with UPS to create MyPost, a digital portal where people could see all the packages en route to them and all the previous packages they had received.

3. Make Sure Packages Get Delivered The First Time
UPS lets alerts customers of when their package will arrive through their My Choice program and smartphone app, using text, email or voicemail. You can reroute or reschedule your package delivery so that it gets successfully delivered the first time to your home or a UPS location. For 40 dollars a year, you can authorize the package to be left with a neighbor or get a confirmed two-hour delivery window. The USPS mobile app lets you track packages, but doesn’t make getting them delivered any easier.

4. Dump Stamps For Digital
Germany, Denmark and Sweden have all played with the idea of digital stamps, where a user can text a pre-set number and receive a code to write on their envelope in place of a physical stamp. The post office saves on the cost of printing adhesive paper stamps. The Red Cross used a similar texting platform to raise $5 million in the relief effort after the 2010 Haitian earthquake.

5. Think Outside The Mail
David Williams, the inspector general for the USPS, has said he envisions a Post Office-certified email inbox that could be used as a kind of cloud server, “a kind of federal safe-deposit box for sensitive personal information,” he told the Guardian. It could potentially store passwords, medical records and photographs.

An even more radical idea comes from Michael J. Ravnitzky, a chief counsel at the Postal Regulatory Commission. He has suggested using the massive delivery network of the post office as a data-collecting machine. Sensors on delivery trucks could monitor air pollution, report cellular or WiFi dead zones or detect chemical or natural gas leaks.