A foam foreshadowing of tomorrow's wars 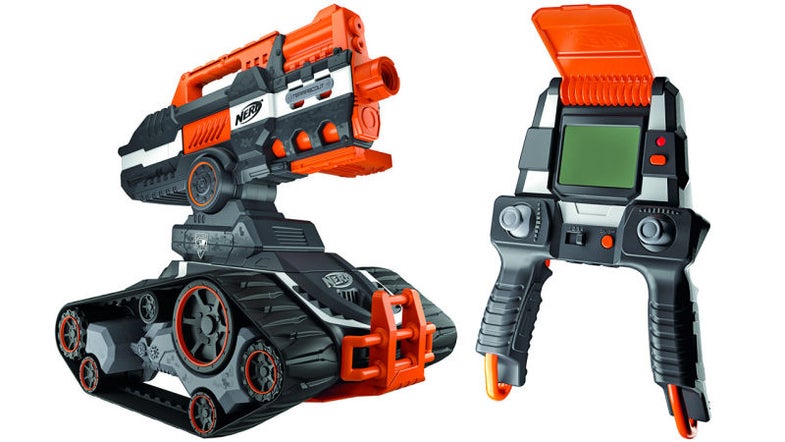 Nerf is our soft, violent future. The decades-old toy brand, built for foam footballs and rapidly adapted into a veritable arsenal of toy guns, is boldly marching into the pretend battlefields of the 21st century with a remote control, camera- and gun-toting robot. It’s called the “Nerf N-Strike Elite TerraScout RC Drone.”

Part of the “Nerf N-Strike” lineup, the TerraScout isn’t Nerf’s first terrestrial remote control gun. The TerraDrone, alternatively described as “NERF N-Strike Elite Combat Creatures Attacknid Dart Shooter” is a six-legged remote control gunbot. The Attacknid, however, is blind. Wherever it goes, it needs a nearby human to spot and direct its fire. That means the Attacknid pilot is vulnerable to whatever foam dart fury their younger siblings have in store.

The TerraScout fixes all of this. For an expected $200, it’s more than twice the price of the blind $80 Attacknid, but the TerraScout has live-feed video that displays on the pilot’s remote. No longer must a complicated supply chain of neighborhood kids with Walkie-Talkies relay target coordinates to their commanders, and wait for the order to fire. Instead, the TerraScout pilot sees what the drone sees, and can then make the decision to unleash up to 18 darts on the target (or call off the mission if the shot isn’t clear). This is a great way to reduce collateral foam-injuries.

Nerf doesn’t yet making an actual flying drone scout, though hobbyists have already gone ahead and attached Nerf guns to drones. (They’ve also attached real guns and worse to drones, prompting legislative action.) And plenty of armed forces, including America’s, are experimenting with armed ground combat vehicles, or gun-wielding robots. What is a Nerf plaything today is likely part of tomorrow’s wars, and if the robot/camera kit is powerful enough, maybe they’ll get modded into weapons and used in the wars of today.