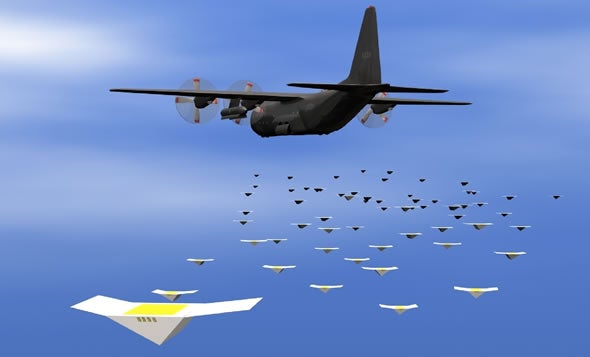 Cicadas are a species most keenly felt by their absence. After years underground, their larvae crawl forth to the surface, shed their skins, and take to the sky in a great racket. Weeks later, all that remains are their empty bodies–a testament to the swarm that was. Developed by the Naval Research Laboratory, the lightweight, disposable Cicada drones are a similar beast: many flying all at once, turning to just brittle shells blowing in the wind once the battle is over. This week, the Pentagon put the latest version of the Cicada on display, a tiny robot warrior ready for the future.

Like their arthropod namesake, the Cicada drones are taking years to develop before they can be launch ready. Constructed without motors and with only 10 moving parts, the Cicada is built around disposability. (Cicada itself here stands for “Covert Autonomous Disposable Aircraft“). The drone is designed to be used just once, with a cloud of Cicadas released from a plane or a balloon and then left in place, their single flight over. Built to be cheap, the original design concept aimed for a cost of just $100 a Cicada, which is incredibly inexpensive for military drones. The newest prototype runs $1,000 apiece, but the Naval Research Lab hopes to get the cost down to $250 each, which is still a bargain for the Pentagon.

In concept art from 2006, the Cicada is an inverted pyramid with wings, like a lost Star Fox target dummy. The earliest physical prototype looked like a paper airplane version of a Space Invaders graphic, all boxes and angles. In 2011 the Navy Research Lab tested a styrofoam-bodied Cicada, with thin wings and flexible edges. During tests, this Cicada was dropped from another drone or a balloon, and then flew down to within 15 feet of a target landing area.

The latest version, which was on display as part of the Pentagon’s latest Lab Day, pairs a boxy yellow body with two semicircular wings, like a knock-off generic Sci-Fi action figure. Regardless of body type, all versions share the same purpose: Fly silently, carrying sensors, and broadcast back to the military what those sensors can pick up. The readings could be as innocuous as weather data, with a swarm dropped over a pass to pick up on local humidity. Or they could carry microphones, landing behind a hostile base and broadcasting back snippets of conversation they overhear. Another option is loading Cicadas with sensors that detect chemical weapons. Whatever sensors are chosen, once the Cicadas land they are done moving until wind or humans passing by choose to pick them up. No word yet on whether these tiny drones are biodegradable, though.

Long in development, the Cicada drone waits in the fertile soil of research, awaiting the year it is finally ready to litter the battlefields of tomorrow with silent, listening bodies.