With 1,000 horsepower and a 350-mile range, this electric pickup looks impressive on paper. 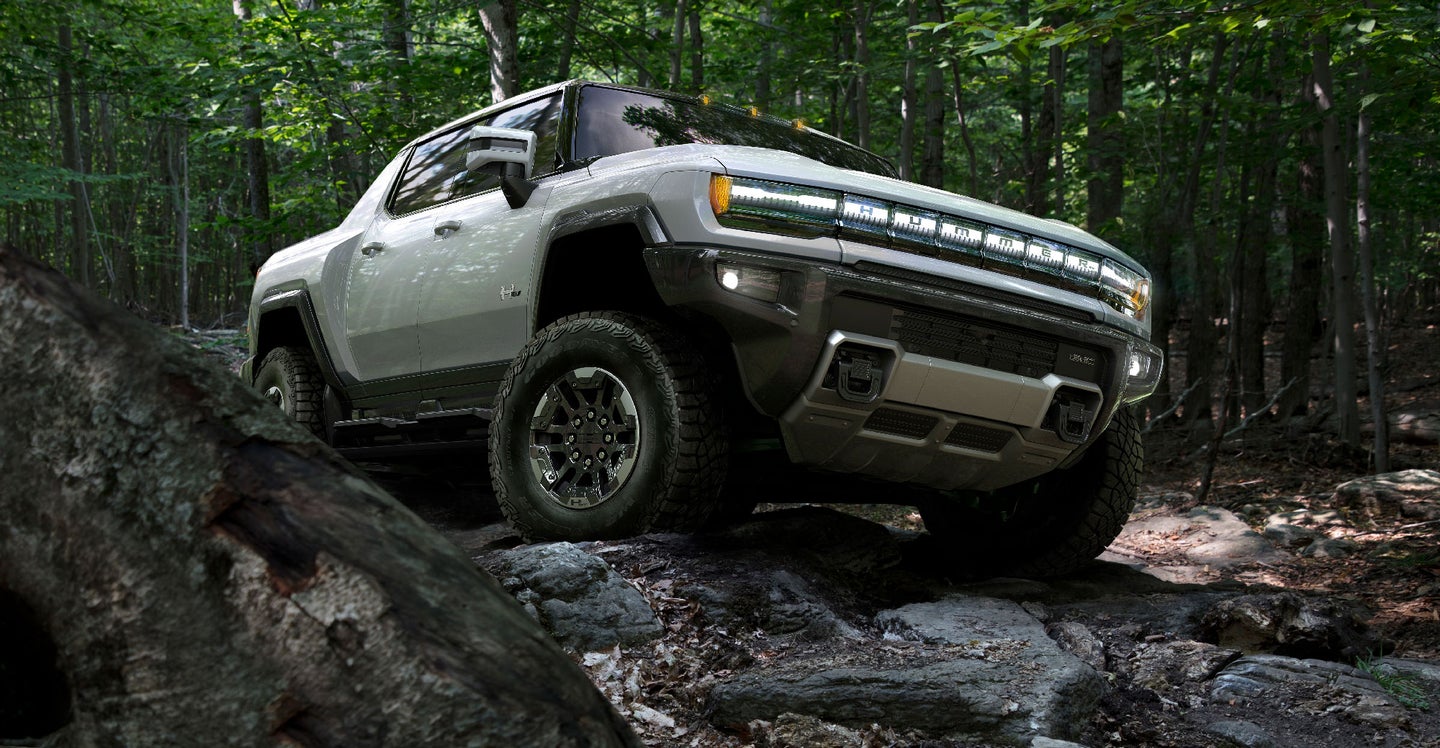 Electric pickup trucks still haven’t quite arrived. Some models are waiting in the wings with lots of hype, including Tesla’s Cyber Truck, as well as other models from upstarts like Bollinger and Rivian. The latest EV pickup to hop on the hype train comes from GMC in the form of a reborn Hummer EV, which is a departure from the vehicle’s gas-guzzling but utilitarian roots and cringe-inducing later years.

The Hummer EV promises impressive numbers, including 1,000 total horsepower, 11,500 lb-ft of torque, and a 3-second 0-60 mph time. The launch model—called Edition 1—also claims it will get 350 miles on a single charge. With an 800-volt fast charger, it can pull enough current for 100 miles of driving after just 10 minutes on the plug.

GMC hasn’t announced the official final battery capacity just yet, but we know the Hummer will ship standard with huge 35-inch wheels and the option to step up to 37-inches as a dealer option. With three total motors—one in front and two in back—turning all that rubber on the road, those power cells are going to require serious capacity to squeeze out 350 miles on a charge.

At first glance, those burly tires telegraph serious off-roading skills, and GMC has continued that trend on the inside. Each wheel boasts 13 inches of adjustable travel and a locking differential, both of which will come in handy when you’re trying to crawl on some rocks. The maximum suspension height is only available in Extract Mode, which raises the vehicle six inches higher than it typically sits so you can travel across deeper water or move over rocks without scraping the bottom of the vehicle.

There are a total of 18 cameras around the vehicle, including two cameras underneath so you can view the trail you’re traveling over in real-time. The lens protectors on the cameras are replaceable in case you scuff them up. And even if you do clip a rock on the underside of the vehicle, the belly of the Hummer is lined with steel plates that protect the battery packs and the differential.

If you’d rather drive around rocks than over them, the Hummer EV has four-wheel steering. It reduces the turning radius of the vehicle, which is handy in everyday situations, but it also allows the truck to drive on a sideways diagonal path, like a crab.

Like the new Ford Bronco, GMC has tried to offset the Hummer’s overall ruggedness with a comfortable interior and some luxury features. The touch-enabled 12.3-inch navigation-entertainment screen runs software developed with the Unreal Engine that powers many popular video games, including Fortnite. It comes with Chevy’s Super Cruise driver assist mode, as well, for hand-free driving.

The roof is modular. You can remove four roof panels, the front I-bar, and the rear glass, then store all of it in the front trunk (please don’t call it a “frunk”) and cruise around like Zoolander and his pals in their Jeep Wrangler. If you’re willing to shell out some extra cash when you place your order, you can get translucent roof panels that filter UV light so you have a view even when the top is on.

There are still a few slightly cringe-inducing features. In launch mode, for instance, you can enable the Watts to Freedom launch control feature, which lowers the suspension, pumps engine sounds through the speakers, and causes the suspension to vibrate to mimic the feeling of a gas-powered motor waiting to take off. The average driver isn’t going to need that launch control or three-second zero-to-60 mph acceleration very often, though, so you can avoid the fake vroom vroom mode completely if you want.

If you want an Edition 1, you’re already out of luck—reservations filled up immediately, but you might get a chance once they start hitting dealerships around a year from now. For all the other models, you can still reserve one here if you’re willing to wait a few years for it to show up. Hopefully by the time the EV2 base model hits in 2024, there will be all kinds of electric pickups on the market to choose from.