Here’s when and where you might see F-16s and other high-performance aircraft in the sky. 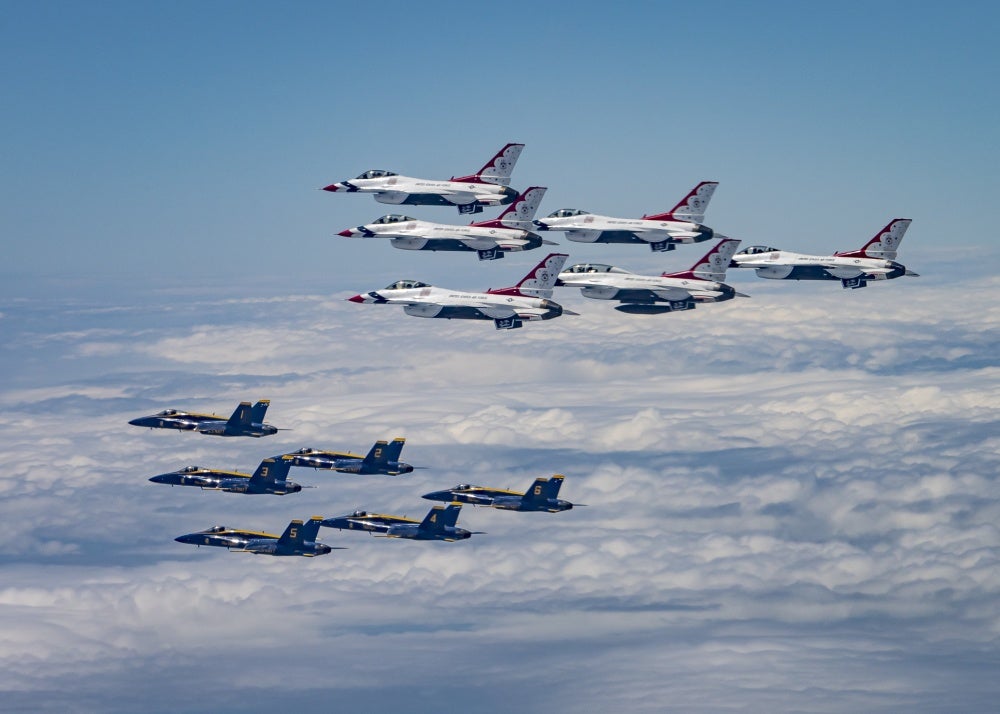 On April 28, two teams of high-performance jets buzzed over big American cities, including New York and Philadelphia. Those fighters belong to the Thunderbirds and Blue Angels, the Air Force and Navy aerial demonstration teams, and are F-16s and F/A-18s.

The purpose of the flights is a chance “to salute those working on the frontline of the COVID-19 response,” the Blue Angels’ commander Brian Kesselring said in a statement.

With the Air Force saying that “several” of these flights are in the works in the near future—the next flybys are happening over Atlanta, Baltimore, and Washington, DC, on May 2—here’s what to know about the fighter jets that could be cruising over your hometown.

The supersonic-capable F-16s are known casually as “vipers,” and the Thunderbirds aircraft are painted red, white, and blue. Vipers are a classic dogfighter that have been flying since the late 1970s—in fact, the first time one lifted off the ground, in 1974, was an accident. These agile swept-wing planes, and the pilots in them, can sustain some 9 Gs of force during sharp turns and other maneuvers.

These fighter jets operate with what’s known as a fly-by-wire system. While some planes, like the 747, have a control configuration that relies on internal physical cables to move the outer surfaces of the plane to carry out maneuvers like turning, the F-16 doesn’t. In the viper, the pilot uses a pressure-sensitive stick to tell the jet what to do, and then four onboard flight computers carry out the request. “The stick doesn’t move more than about a quarter inch,” Maj. Jason Markzon, a pilot with the Thunderbirds, told me before he took me up for a brutal and dramatic flight last year.

The Thunderbirds—who, like the Blue Angels, typically perform at air shows—will be flying in a delta, or triangle, formation of six planes. They fly two different variants of the F-16: a C model and a D. The key difference is the number of seats. The F-16C holds just one pilot, while the D sports two seats in tandem. That back spot has all the flight controls needed for a pilot in training to fly, but is also a good spot for an aerial photographer or other guest to sit. (Indeed, the back of an F-16D was where I sat—and vomited—during my flight.)

Meanwhile, the Blue Angels rocket around in a different type of plane: F/A-18s. Those are called Hornets, and they can take off and land from aircraft carriers, something the viper cannot. The aircraft that the Navy flies for this team are specifically F/A-18 C and D models, and just like with the F-16, those letters tell you how many seats the aircraft has. Unlike the F-16s with their viper nickname, these jets don’t have a fun sobriquet—they’re just called Hornets. However, the newest and biggest F/A-18s variants are called Super Hornets, and their nickname is “the rhino.”

Besides the fact that the Blue Angels are painted, well, blue, you’ll be able to notice another difference between them and the Thunderbirds: the F/A-18 Hornets have two vertical tail fins in the back to match their twin-engines. Vipers are a little simpler-looking—one engine, one vertical tail fin. Like the Thunderbirds, the Blue Angels will be flying in a delta formation of six planes.

Both the F-16s and F/A-18s can get gassed up mid-air from a refueling tanker. In fact, as one Thunderbird pilot mentions on Instagram, the flights for both teams departed from Florida, and got refueled in the air. (For a critical take on the operations, check out this post on the military-focused site Task & Purpose.) The easiest way for people to see the schedules and routes is to look at the Thunderbird’s Twitter account.

This article has been updated. It was first published on April 28.