Teams of bacteria have working memories remarkably like ours

This finding illuminates an unexpected connection between the abilities of simple organisms and complex neurons in the human brain. 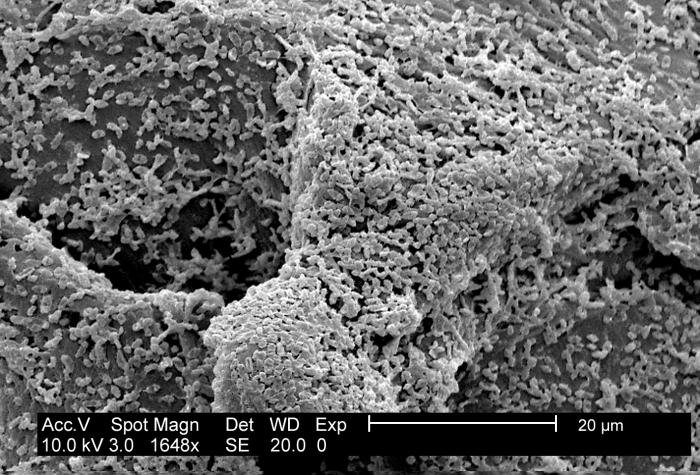 Groups of bacteria that stick together, known as a biofilm, have a strong working memory, according to new research. CDC
SHARE

Tiny organisms do extraordinary things. Bacteria can both help bring life to soil and wreak havoc on a human digestive system during a bout with food poisoning. However, we don’t normally think of microbes like bacteria as being smart. Groundbreaking new research, though, suggests otherwise: When many bacteria live together as a unit, a conglomerate known as a biofilm, the biological system creates a working memory in some ways similar to the way our own memory works.

A new paper published this week in the journal Cell Systems documents how these communities of bacteria have the capacity to remember when they are exposed to blue light. This finding illuminates an unexpected connection between the abilities of simple organisms and complex neurons in the human brain.

Gürol Süel, a molecular biologist at the University of California at San Diego and his colleagues study how biofilms work and behave. Süel’s lab had previously identified that certain bacteria use electrical signalling to communicate with each other. The electrical signals are sent through potassium ions, which create positive charges in the cells. If the cell has an overall negative charge itself, the signal will come through. This concept is known as membrane potential.

They started probing bacteria by exposing them to different wavelengths of light using a laser. When they hit the biofilm with blue light, they found that it changed the overall charge of the bacteria, meaning the signal came through. Hours later, when they tried the test again, they found that the bacteria’s membranes remained changed—in other words, the biofilm remembered the previous interaction with blue light. “We can show here that this memory is extremely robust,” Süel says.

Membrane potential is also one of the crucial components of forming and retrieving memory in neurons found in humans and other animals. Even though bacteria are individually very simple organisms, they are able to communicate in the same sophisticated manner as neurons. “It’s very intriguing to see that bacteria and neurons share something,” he says.

“I am continually amazed at the parallels we keep finding between bacteria and neurons,” Matthew Bennett, a professor of biosciences and bioengineering from Rice University who was not involved in the research, told Popular Science by email. “The two seem so different, both in physiology and origin, that it is really exciting to find any similarity in the way they process electrical signals.”

At present, the researchers have no idea why the bacteria in biofilms are able to remember like this. That will be the focus of future research. Another research focus might yield other intriguing findings, Süel says: whether the memory properties of the biofilms can be used to do computations, the same way memory in a computer supports the computer’s calculations (which are admittedly much more sophisticated than anything the scientists would expect an individual biofilm to be able to do.)

“It’s very, very interesting,” says Ido Golding, a professor of physics and microbiology at the University of Illinois at Urbana Champaign who was also not involved in the published work. Golding says the work adds to the field’s understanding of how bacteria’s sophisticated communications systems work and behave.