The best way to strip paint off a fighter jet? Laser-wielding robots.

The Air Force hopes to expand a program that’s faster and produces less hazardous waste than the traditional approach. 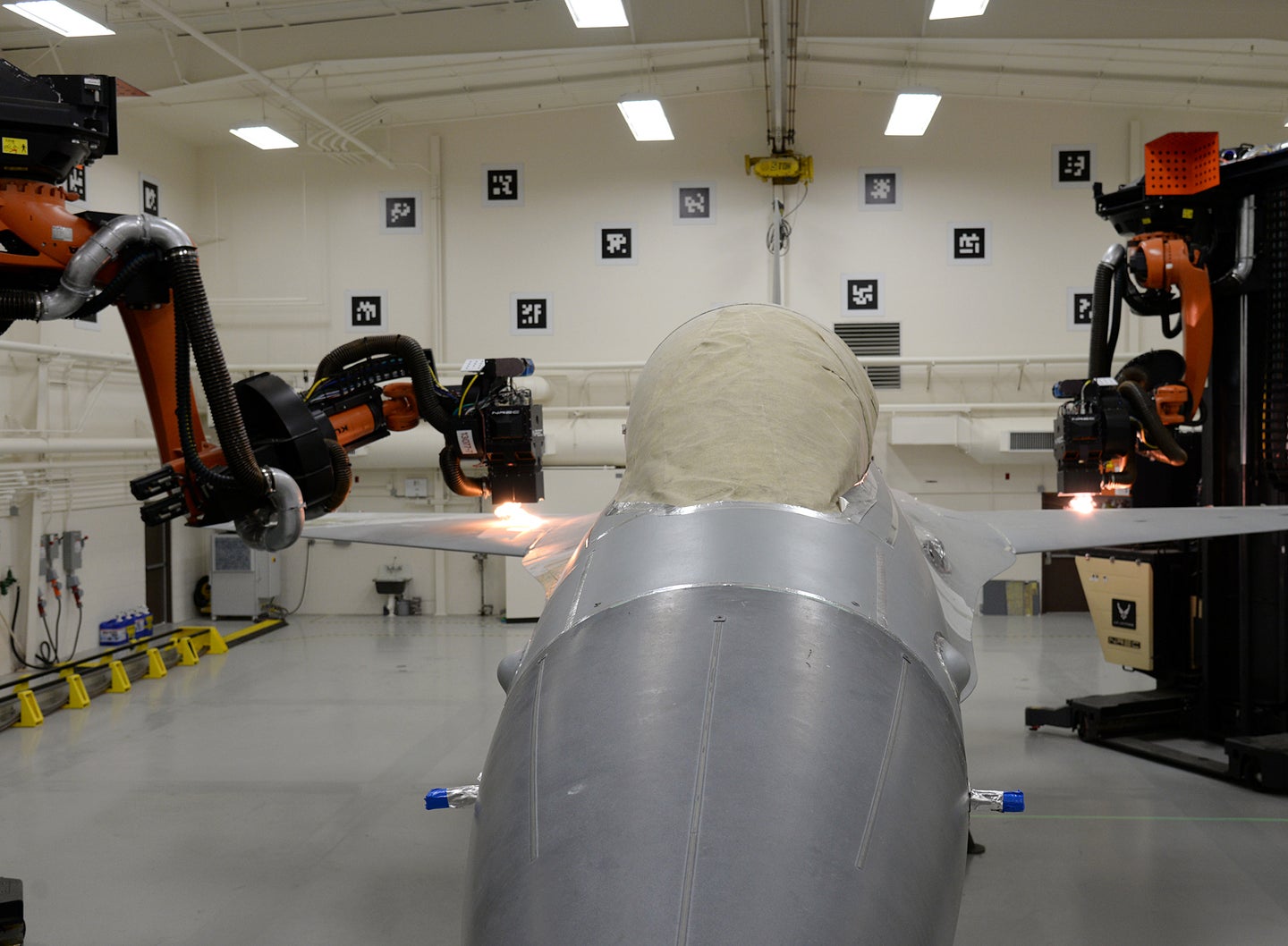 The two robots each work on their own side of the jet. Alex Lloyd / US Air Force
SHARE

Most of the Air Force’s F-16 fleet is painted a shade of grey. In addition to their camouflage effect, the top coats and primer below them prevent the pricy metal planes from corrosion due to moisture. Just like a house needs to be repainted from time to time, so do fighter jets.

Sometimes, a maintenance crew can throw new paint on top of a plane after smoothing out what’s on there already. But unlike houses and other objects that don’t fly, weight on a plane matters, and if those layers get too thick and heavy, they need to come off before the new paint goes on. Stripping that old stuff off has been a time-intensive process that produces around a ton of hazardous waste per jet—debris that includes hexavalent chromium, which causes cancer. The new way? Autonomous robots zap the aircraft with lasers to carefully combust the paint off the surface of the fighter.

To strip the paint off an F-16 the traditional way, the Air Force has been shooting plastic beads out of hoses. The system—called plastic media blast, or PMB—is like sandblasting. The pressure of those beads against the jet mechanically strips the paint right off the surface. Because they’re actually pummeling the aircraft, there’s a three-blast limit per F-16 so that its metal surface doesn’t become fatigued.

The process is dirty. “Inside a blast booth, you can imagine it’s very dusty, very nasty,” says Rik Crowther, a senior engineer at Hill Air Force Base in Utah. The people holding these heavy hoses wear white protective suits and resemble firefighters, he notes, although instead of blasting water at the aircraft, they’re spewing plastic. The Air Force can reuse some of those plastic beads after they’re captured, thanks to a reclamation system, while some of it gets pulverized during the blasting process, mixing with the paint and primer.

“Every time we blast an F-16, we generate 2,000 pounds of dust,” Crowther says. “That entire 2,000 pounds is all hazardous waste.” Most of that dust is from plastic debris, but it’s been mixed with the materials coming off the surface of the plane, which include hexavalent chrome as well as cadmium, also a carcinogen.

The new way is better: it’s not only faster, but instead of one ton of hazardous waste, it produces just 10 to 12 pounds of ash.

It works thanks to two robots that use 6-kilowatt continuous-wave lasers to strip the paint off. Crowther notes that they restrict access to the space so no humans walk in when they shouldn’t. “We can’t have anyone walking in the room when lasers and robots are running,” he says.

The laser-wielding robots start the process already having a crude, blocky sense of what the fighter jet looks like. Then, with one robot on each side of the fighter, each one uses onboard lidar sensors—the same kind of sensor that a self-driving car uses as part of its perception system to see the world around it—to carefully map the three-dimensional topography of the plane. That detailed information allows the robots to get in closer to the working surface. Each bot will work from about five to six different stations on its side of the plane. “In each location, they will stop, and then they will do a higher-fidelity scan of just the area that that robot can reach,” Crowther says. It then has the information it needs to figure out how to strip that paint.

The system, which analyzes each section in little squares, can determine whether or not to hit that part with the laser, and it can also dial up or down how much power it zaps the surface with. “This is so precise, we can go down and leave the primer alone,” Crowther says.

The laser hits the coating with energy, which then combusts. “You’ll see a bright flash of light,” he says—that’s the paint leaving the surface and burning. A powerful vacuum sucks it up. “We’re actually pulling the flame off the surface of the aircraft,” he notes. That’s where the 10 to 12 pounds of ash come from.

The other benefit is that, unlike the plastic bead blast, the lasers don’t fatigue the jet, so there’s no limit on how many times they can strip the paint off an aircraft this way. The Air Force has been using the new method since 2017, and has since zapped 20 production F-16s. They hope to scale it up to be able to hit about 40 or 50 per year. The next aircraft on their list, besides the vipers they’re already lasering, are A-10s, F-22s, and F-35s. (Meanwhile, the pressurized plastic system isn’t going anywhere.)

Not all Air Force planes are grey, and the lasers at Hill Air Force base actually struggle with aircraft that have glossy white paint on them: that means that this method wouldn’t be a good way to strip the paint off the sleek F-16s that comprise the Air Force’s air show demonstration team, the Thunderbirds— those are red, white, and blue. “We’re working on other lasers that don’t have a problem with white,” Crowther adds, “but these ones do.”