How the National Guard dresses for COVID-19 and other disasters

We got a virtual tour of the gear on hand at a Weapons of Mass Destruction Civil Support Team. 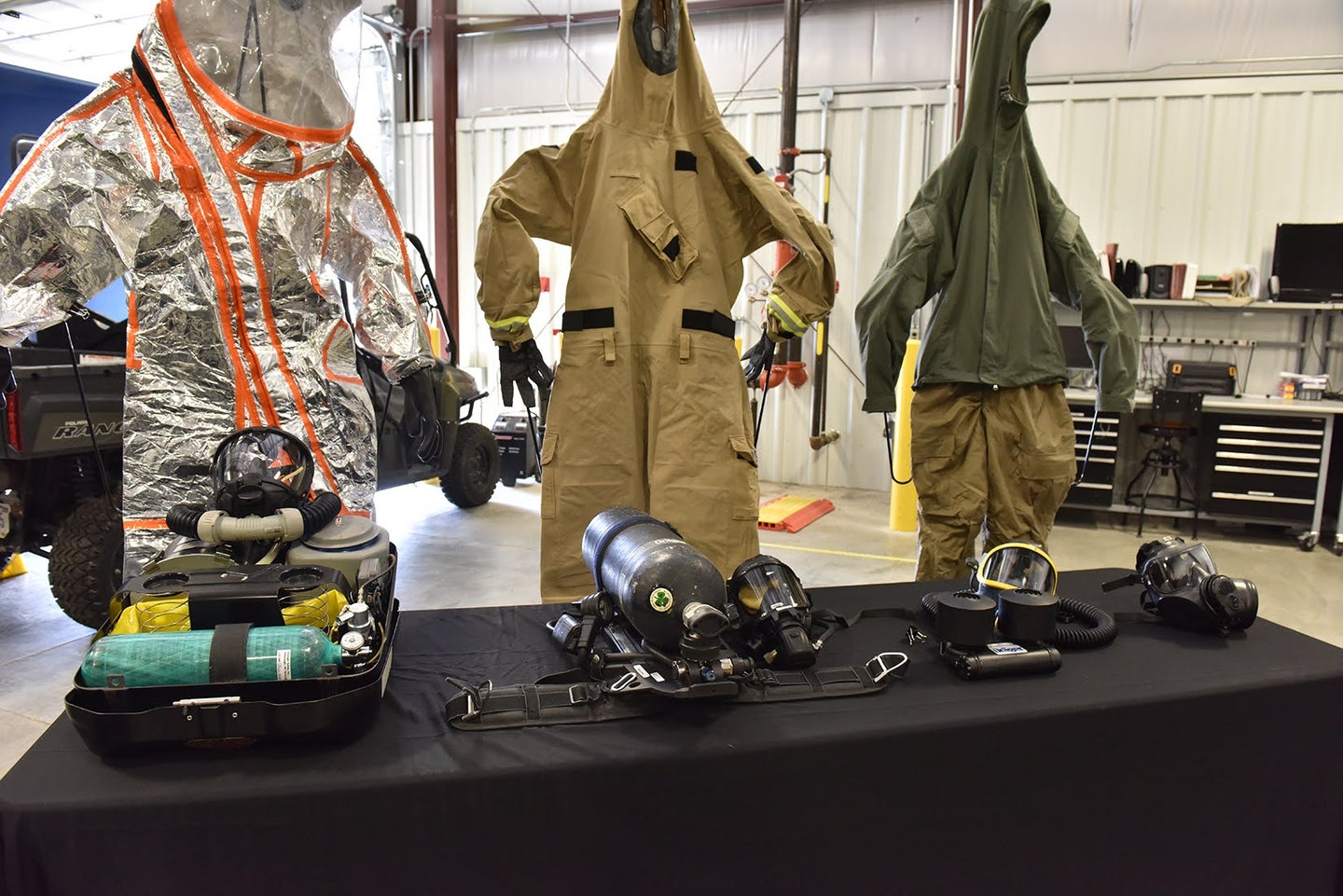 From left to right, gear in the Level A, B, and C category on display at a Weapons of Mass Destruction Civil Support Team facility in Scotia, New York. Senior Master Sgt. Gizara / National Guard
SHARE

Follow all of PopSci’s COVID-19 coverage here, including the most recent numbers and tips on how to make your own masks.

The coronavirus pandemic has understandably spurred millions to think about how they protect themselves—and others—in public spaces. And now, the Centers for Disease Control and Prevention is advocating for people to wear cloth masks to help stop anyone who might be infected, but asymptomatic, from transmitting the virus. Meanwhile, the type of masks that can halt viral particles from getting through should be reserved for healthcare workers.

But other first responders have drastically different levels of protection at their disposal—from gear that would be overkill for COVID-19 but appropriate for, say, sarin gas, to equipment that’s a better fit for the current disaster. We got a look inside a Weapons of Mass Destruction Civil Support Team in Scotia, New York, where Lt. Col. Matthew Woolums walked us through the range of stuff in their kit via video conference.

Civil support teams focusing on weapons on mass destruction response are a part of the National Guard, and there are 57 of them. Meanwhile, some 21,300 Guard troops have been activated during the COVID-19 crisis so far.

Here’s how this team’s stuff breaks down, from the most hardcore configuration to the least. Gear like this is called PPE, for personal protective equipment.

At the most extreme end, in a category called Level A (or sometimes, Class 1), is a silver and orange outfit. It’s sometimes called “the marshmallow suit,” Woolums says. “That thing kinda swells up when you put a person inside of it.”

Inside the marshmallow, the occupant has their own breathing supply since the suit itself is airtight. They’d either be wearing an SCBA—a self-contained breathing apparatus, like a firefighter would have—or a rebreather. That rebreather is a combination of an oxygen bottle and a system, complete with ice, that recycles the air to make it endure for four hours compared to a basic SCBA, which only lasts about an hour.

The suit is sealed against both liquids and vapors, Woolums says. “A chemical hazard that might be volatile and off-gassing—this suit would prevent that from reaching the individual inside,” he notes.

While first responders consider many variables before deciding what kind of gear to don, the two main reasons that someone might wear this suit is when they don’t initially know what they’re dealing with in a given area, or when the toxin in the air is both something you don’t want to breathe in—or have touch your skin.

The next notch down still has the human breathing air from an SCBA or a cylinder, but that equipment isn’t enclosed in an air-sealed, Stay-Puft outfit. The air supply is on the outside of the garment, and the suit itself gives “splash protection,” Woolums says. In other words, the occupant doesn’t need to worry about a hazard that’s volatile or off-gassing, but wouldn’t want anything nasty splashed on their skin, and they still want the dependability of carrying their own air supply.

As the outfits get less extreme, they also become easier for their occupant to maneuver in.

At Level C, a face mask connected to a filter strains hazardous particles out of the ambient air instead of totally replacing the supply with an SCBA or rebreather.

The filters could be attached either to the mask itself, or be located at the end of a hose and attached to a belt. On display at the Scotia, NY Weapons of Mass Destruction Civil Support Team was an M53 mask, which can screen out anthrax, for example. Clothing in that category might also have a charcoal liner in them, Woolums says; the substance can help “absorb chemical warfare agents, if you were to get splashed,” he notes.

The Level C-style gear demonstrated at Scotia is more appropriate for responding to the COVID-19 outbreak than the other more extreme garments are, but it’s still perhaps overkill and more intense-looking than it needs to be for the job.

Instead, National Guard troops who are in a position where they’d need to protect themselves from the coronavirus might dress like a healthcare worker who is fortunate enough to actually have the equipment they need. In that case, they’d ideally don face or eye protection, a paper-like disposable Tyvek-style suit, two pairs of gloves, and an N95 mask—suitable for screening out the virus for healthcare workers, but not good enough for filtering out anthrax, for example. That level of protection would probably be considered something less than Level C.

Also on hand at Scotia was additional gear that’s well outside the realm of the COVID-19 situation. One of those pieces of equipment is a Talon 4 robot, the type of bot that in another context might handle explosives like an IED (see also: The Hurt Locker). “This has been modified to deal with chemical, radiological, and nuclear threats,” Woolums says; it can act as a scout to go ahead of people into a dangerous area.

The Talon can check out a building and build a map as it goes. To help it see its surroundings, it has LIDAR onboard, a sensor that relies on lasers and is commonly found in self-driving cars and even the latest iPads.