As the governor idled, Carroll County leaders began pondering their own lockdown. Their decision may have saved lives. 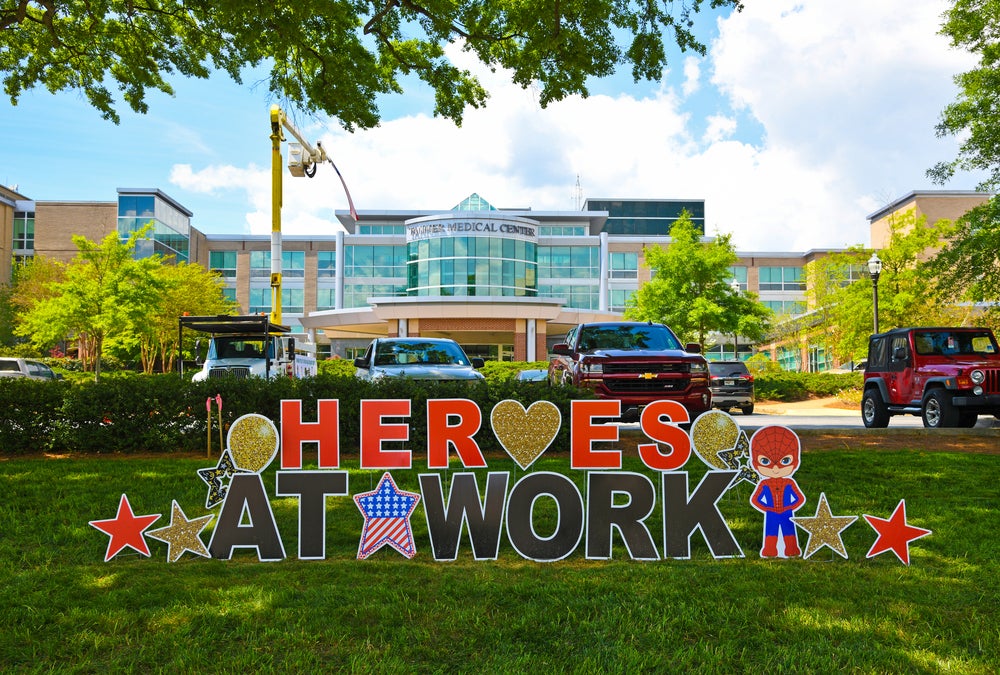 Keren Landman is a practicing physician and writer who covers topics in medicine and public health. Her work has appeared in Vice, STAT, and The Atlantic, among other publications. This story originally featured on Undark.

On Friday, March 13, the Georgia Department of Health reported 42 confirmed cases of COVID-19 and one death due to the disease caused by the virus. Over the weekend, the number of cases statewide nearly tripled. Doctors in Carrollton, a west Georgia town 20 miles from the Alabama border, had been sending patient samples to LabCorp, a national testing facility, for a week. None of the results had come back yet.

By Monday, Laura Larson was getting nervous. The infectious disease doctor and medical director of infection prevention at Carrollton’s Tanner Medical Center recalls feeling an uncanny sensation of time moving in slow motion. With limited testing capacity at the state public health lab and nowhere else to turn, she wasn’t sure how to proceed. “Suddenly,” she says, “you have a loved one being tested. They want to know tomorrow if that test is back.”

Other fixtures in Carrollton’s local leadership were also feeling uneasy. Daniel Jackson, the 15-year president and CEO of the Carroll County Chamber of Commerce, attended a two-day conference in a suburb of Atlanta on March 12 and 13. He recalls seeing a large sign when he first walked in: an image of a handshake with a big slash running through it.

“The keynotes, when they come speak to us or preach to us, they tell us to quit hugging and shaking, but that’s what you do in the South—and that’s especially what you do in the Chamber world,” says Jackson. By that point, he was starting to wonder, “should I even be here?”

In other states with fewer cases, governors were closing schools and businesses and enforcing broad restrictions to enforce social distancing. But in Georgia, Governor Brian Kemp took a less urgent approach. On March 14, he declared a state of emergency, leaving decisions about closures to be made at the local level. It would be nearly three weeks before Kemp issued a statewide shelter-in-place order on April 2, explaining that people can transmit the virus before they feel symptoms: “We didn’t know that until the last 24 hours,” said Kemp. (In an interview, CNN’s chief medical correspondent, Sanjay Gupta expressed incredulity: “My kids who go to school in Georgia knew [about asymptomatic transmission] a month ago,” he said.)

In the intervening days, without strong guidance from the governor’s office, Carroll County’s leadership struggled to decide whether to lock down their county before the rest of Georgia. Their final decision may have saved lives—but it was also hampered by a varied and uncertain patchwork of official responses to COVID-19 across the South, which has put enormous pressure on local officials.

Carroll County declared its own state of emergency on March 16, and with it issued a recommendation from the county chairman that sick people stay home—but none of the business restrictions or authorization of police department enforcement that a shelter-in-place order would include. Members of Carrollton’s business community responded to its local ordinance in very different ways. Some storefronts closed, while some restaurants and churches stayed open. On the Facebook page of a local community information site, a few restaurant owners issued reassurances about business as usual. “Each person wants to work during this time,” wrote one proprietor. He added, “fear kills the spirit. I don’t live in it.”

Larson feared the worst: that the virus was spreading among members of the community without anybody knowing it. She knew she’d need more information to help local leaders justify a stronger stance. On March 16, she received an email from Diatherix, an Alabama lab the hospital uses for other disease testing. The company would be rolling out COVID-19 tests the next day, read the email. Did her hospital want some? The administration agreed to contract with the company for 2,000 tests. But that night, Larson got a call from the hospital’s chief operating officer. Demand was skyrocketing; the hospital would have to pay $300,000 up front—an outlay it had no plan for recouping. Did Larson really think they would need all of those tests?

Her decision ultimately led the county’s Board of Health to pass a shelter-in-place ordinance just over a week ahead of the governor, making it one of the few counties in Georgia to take such an action. Now local public health officials wonder if their Herculean—and somewhat controversial—early efforts will offer residents an advantage relative to the rest of the state. A stay-at-home order in one county can have benefits, says Benjamin Lopman, an epidemiology professor at Emory University’s Rollins School of Public Health. But, he adds, people don’t stay within county lines. “What this outbreak is showing us is that we’re all connected,” Lopman says. “One county has a shelter-in-place order, but the neighboring ones don’t—the virus doesn’t care.”

On March 17, the day after Larson’s late-night exchange, the hospital set up drive-through sampling in its parking garage. Quietly, Larson and her colleagues spread the word to area physicians that they could send symptomatic patients to the drive-through site to be swabbed while they sat in their cars. Doctors and staff had been afraid to test patients in their own offices, fearful they would facilitate viral transmission by irritating noses and throats with the swabs necessary to collect samples. The drive-through system allowed them to screen patients over the phone or using telemedicine, and to order the test electronically. Patients began to trickle in.

The next day, the Georgia Department of Health announced it was rolling out 18 of its own drive-through sites across the state. But the state system’s testing capacity was starkly limited compared to Tanner’s: It could only run 100 tests in total each day.

Two days after the hospital began testing patients, it started getting results back from Diatherix. Eight people from the first day of testing had a positive result for COVID-19; two of them had already been admitted to the hospital. Each batch of daily testing that followed yielded 15 to 20 more positive tests, and nurses were starting to notice geographic and social clusters emerging among the cases.

Cases were also mushrooming elsewhere in the state: Epidemiologists were deployed to investigate six COVID-19 deaths in the southwest Georgia city of Albany that were later traced to local funerals. By Sunday, more than 600 COVID-19 cases had been confirmed statewide. Carrollton’s local leadership was growing concerned that the community wasn’t taking social distancing recommendations seriously. The city’s mayor and the council met and declared a state of emergency. Loy Howard, the president and CEO of Tanner’s parent organization, called Larson and, as she recalls, said, “We’ve got to pursue a shelter-in-place.”

On Tuesday, Larson was speaking numbers into a telephone at the Carroll County Board of Health’s emergency teleconference meeting. She cited figures based on World Health Organization estimates of COVID-19’s replication rate in the absence of any intervention.

“With one person being able to infect 2.5 persons in five days, the 61 persons that we’ve identified now have already infected 153 people.” she said.

“If we do not socially distance and we let people do what they’re doing now,” she continued, “153 people in Carroll County will infect 62,000 people in a month.”

Using estimates suggesting a 3 percent mortality rate with infection, “that’s 1,863 Carroll County residents dead in a month. And that’s just too many,” she said. Within about 20 minutes, the board unanimously passed a shelter-in-place order.

Nine days later, Gov. Kemp announced his plan for a statewide shelter-in-place on the basis of his newfound understanding of asymptomatic spread. “I agree with the decision,” says Lopman, but “the governor justified it by this, sort of, ‘new information’ and I don’t really think that was new information.” (This week, Kemp drew criticism for reopening the state’s beaches—a decision his office told a local news station was made with guidance from public health and emergency management officials.)

In the context of a fast-moving epidemic, days matter. The greater the social distancing measures taken in a community, the more slowly the number of people infected grows. Without social distancing, COVID-19 cases can double in a community every few days—but with effective distancing measures, that interval can be stretched out substantially, reducing the number of sick people flooding the health care system at once, and buying crucial time to develop tests, vaccines, and scaled up health care capacity.

When people see federal and state governments limit people’s ability to freely work, shop, or circulate around their communities, “those are things that raise anxieties about tyranny and state control and government power,” especially in Southern states, says Timothy Lytton, a health and safety regulation researcher at Georgia State University. Most of the commenters on the city of Carrollton’s Facebook page were supportive of the shelter-in-place order, but at least one was not. “This has already heavily violated every human right we have as American citizens,” the person wrote shortly after the order was issued. “If you don’t want to get sick, you have the right to stay home and not go out in public. The rest of the world should not shut down for those who are stricken with fear.”

Carroll County’s experience is not unique. Nationally, the decentralization of public health authority and its lack of enforcement authority has resulted in an uncoordinated response and a patchwork of public messaging, perhaps most notably in the South.

A few days after Carroll County’s shelter-in-place order had been passed, Larson’s husband went to a large national-chain home-improvement store to pick up red nugget mulch for his mother. The parking lot was full; he turned the car around and left. In early April, a week and a half after the order was passed, Carrollton’s community members still expressed dismay at the crowds in grocery stores and parks: “People are not concerned,” wrote a commenter on the city’s Facebook page, noting “way too many people” at the grocery store. “Calm down,” wrote others.

Larson suspects the effectiveness of the order has varied in part because the county didn’t know how to enforce it, although the lack of backing from state and federal authorities may also have played a role. Carrollton’s mayor has since sent letters to large stores, including grocery stores, asking them to put socially distancing procedures in place.

Of more than 1,400 tests done at Tanner Medical Center to date, nearly 16 percent have been positive. Larson worries that people who need testing aren’t getting it due to concerns about costs—and that they’re not wrong. “There’s a lot of information in the media right now that the testing is free. I would love it if it were,” she says. In reality, what and how to charge for tests is an administrative decision that will be made further down the road.

“Everybody just wants to get through this,” Larson says, “and figure out about that later.”

Lopman, meanwhile, says he finds it encouraging that local, state, and federal health messages are slowly, finally beginning to align. It’s not good for disease control, he suggests, when some people are sheltering in place and others are not: “People don’t know what to do,” Lopman says, “when they’re hearing different messages.”