Accurately modeling an aircraft in flight means considering the way air interacts with a myriad of surfaces on a plane. 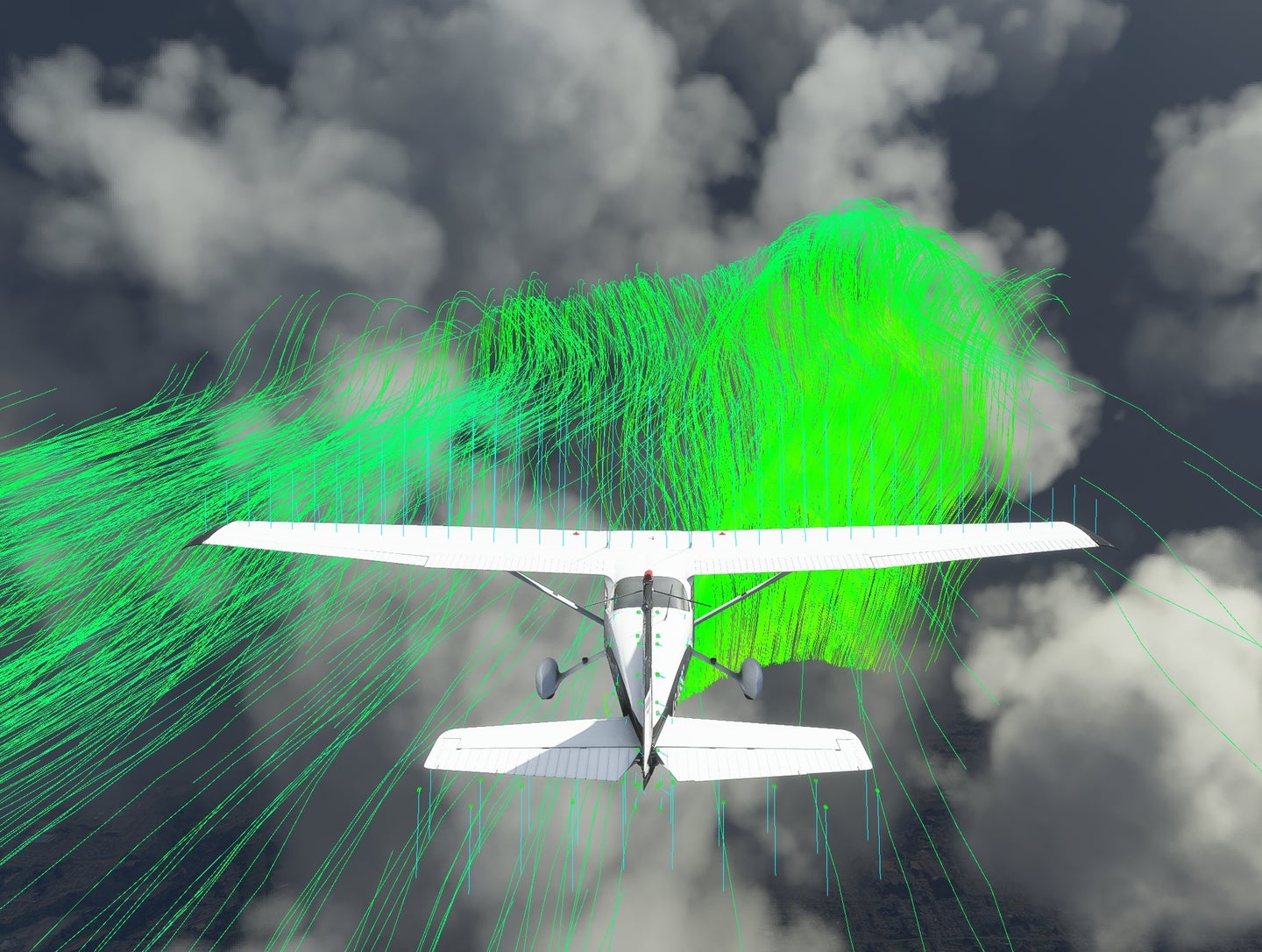 The new game considers thousands of points on an aircraft's surface and how those points interact with the air. Microsoft Flight Simulator
SHARE

After more than a decade, Microsoft has officially launched the next version of its famous flight simulator. The game dropped for PCs this week, and while no computer simulation of something as complex as flight can completely mimic what actually happens in the real world, the program deserves kudos for coming close.

Last month, we took a look at how the simulator modeled the world. It uses artificial intelligence to carry out tasks like reconstructing some building shapes or figuring out where landscape features, such as trees, should be located. And other computer techniques allow them to depict elements like waves in the water, or the light that illuminates the world and the inside of the cockpit.

But of course, ground-based aviators fire up a simulator because they want to fly. Here’s how Asobo Studio, which developed the game with Microsoft, made the lifelike aerodynamics happen.

“Every simulation is always an approximation of reality,” notes Sebastian Wloch, the CEO of Asobo Studio. “I don’t know when we could actually simulate a real airplane with all the little atoms of air flying by.” In other words, there’s no such thing as the Matrix quite yet. And of course, military aviators and commercial pilots alike use simulators (like for an F-35) that are quite different from what you’d run at home on your desktop. Some of them even move: I once had the chance to briefly fly a huge B-52 over a virtual Las Vegas in a large simulator at Barksdale Air Force Base in Louisiana, for example.

That said, one of the key ways that Microsoft’s Flight Simulator differs from the 2006 edition (the last time it was released) is how the program simulates the plane going through the air. The previous version depicted the plane as just a single point in space, but the modern program considers what Wloch describes as “thousands” of points on the surfaces of the planes, and how those surfaces are impacted by the moving air.

To understand the difference between the two methods of modeling flight, think about turbulence. Imagine this scenario, with an updraft coming off the ground: “A plane is flying over a hill and only the right side of the plane—the right wing—touches the updraft, but not the left side,” Wloch explains. The aircraft is going to respond with its right side being pushed upwards. If you were a passenger on a plane that did that, you’d probably feel it, perhaps as a rocking side-to-side motion. That differs from the aircraft simply jostling directly up and down as if it was a single point moving through the air.

To do that, they couldn’t just depict the plane as a point in space, or even two points in space, such as the left wing and the right wing. “We simulated many, many different surfaces,” he adds.

Another reason the team needed to represent the aircraft as many surfaces being impacted by the air is to capture a phenomenon known as a spin, in which a plane plummets downwards and turns. “A spin is: The left wing flying, the right wing stalling,” Wloch explains. (It could also be the other way around.) “And you cannot have a spin if you have a single-point simulation.”

The same thing is true for capturing the way different wing shapes stall: An airliner, with its wings angled backwards, behaves differently from a plane with a straight wing.

The program even makes use of virtual wind tunnels to ensure that the plane is performing as it should, Wloch says, a process that happens when you load the game. “It adjusts the plane so that it flies like it’s supposed to fly,” he notes.

One lesson the team learned through creating the game is that individual planes of the same make and model differ from one another slightly. “Every plane is different,” Wloch says. Individual aircraft can perform slightly differently based on factors such as how they’ve been maintained, for example, or whether the wheels have aerodynamic covers on them. “Currently in the simulator, we have one version of a plane,” he says. That simulated aircraft may fly a little differently from a specific aircraft in the real world of the same model. That fact leads Wloch to reflect: “Every plane has almost a soul, right?”