Boom rolled out the XB-1 yesterday. Next up: a Concorde-like aircraft called Overture. 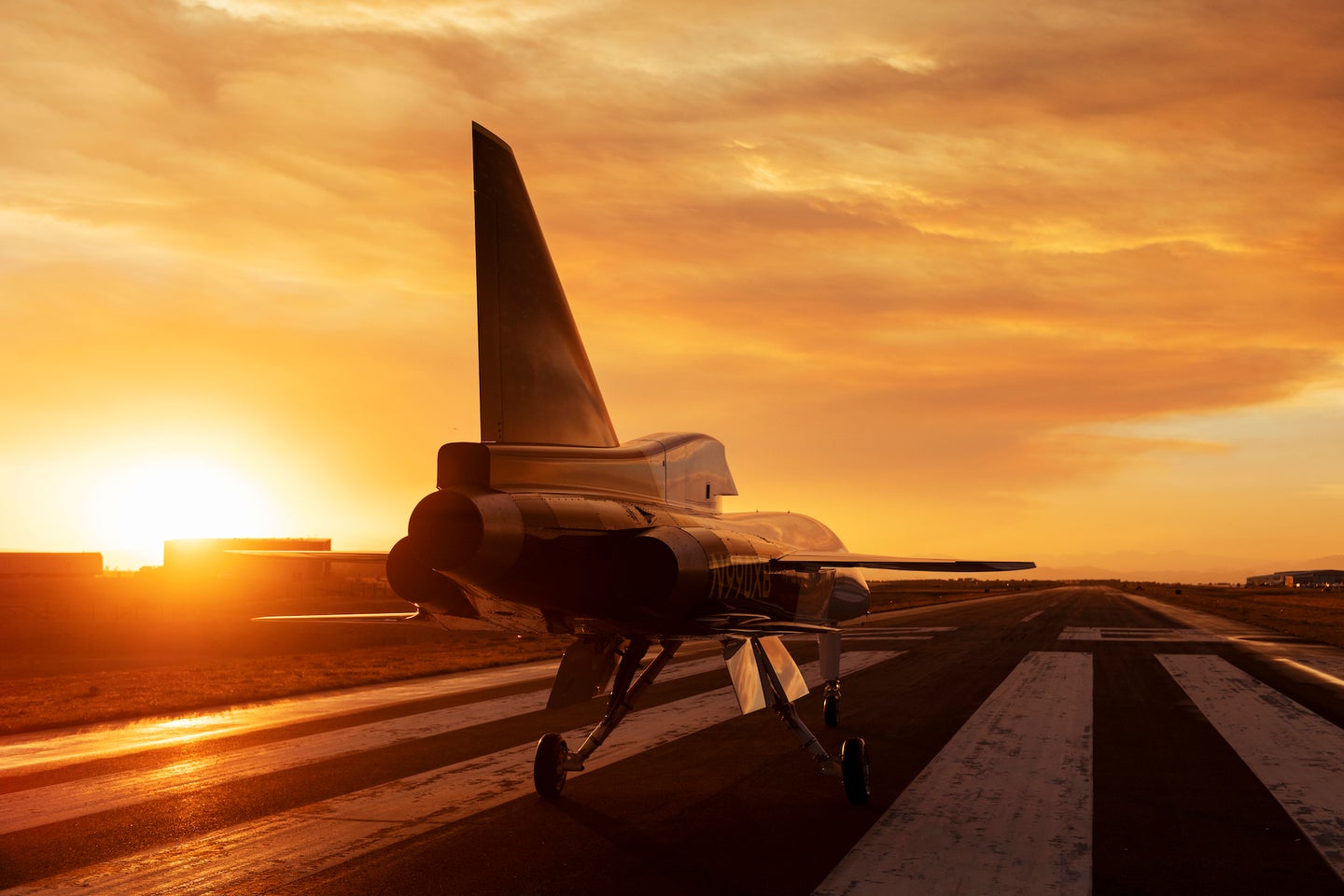 Commercial airliners today whisk passengers through the air at high speeds, but they can’t come close to breaking the speed of sound. Even back in the era of the Concorde, supersonic travel was the exception for commercial aviation, not the rule—and that iconic craft suffered a catastrophic crash in 2000, and stopped flying in 2003.

Meanwhile, supersonic military aircraft are common—fighter jets like F-16s or F-35s can routinely smash through the sound barrier, as can a bomber called the B-1B. It’s rare, though, to see a new design aimed at the civilian market.

But there’s a glimmer of hope that someday, perhaps before the end of the decade, regular folks could fly between cities at astonishing speeds that exceed the rate at which sound travels. One company trying to make that happen is called Boom, and yesterday, it rolled out a plane they call the XB-1. The XB-1 is not a passenger plane, but instead, the Colorado-based company sees it as a stepping stone towards its ultimate goal: a craft called Overture that will indeed carry people.

The XB-1 is one-third the size of the Overture aircraft the company has planned. “This is history’s first independently developed supersonic jet,” Blake Scholl, the company’s CEO and founder, told Popular Science earlier this week. “Previously, that’s been governments and militaries only.” While Overture could possibly carry passengers by 2029, according to the company’s timeline, the first flight for the XB-1 will happen next year, Boom says.

While the XB-1 is just a waypoint towards a bigger airplane, Scholl says that the two aircraft have elements in common. “Everything we’re learning in XB-1 directly applies to Overture,” he says. One of those elements is the “aerodynamic shaping of the aircraft,” he mentions, like the plane’s long, skinny fuselage.

Another is the use of carbon fiber instead of aluminum. “It actually stands up much better than aluminum to the stresses and temperatures of high-speed flight,” he says. “The material systems that are on XB-1 are very similar, if not actually identical, in some cases, with what we’ll use on Overture.”

The XB-1 aircraft is 71 feet long—for comparison, that’s less than a third the length of a 747-400—and Scholl says that the initial 47 feet of the craft are made of carbon fiber composite. The rear of it is crafted from “titanium and some titanium alloys,” he says, which handle the extreme heat of the engines on the XB-1 better.

The XB-1 employs three engines, called JB5-15s. But Overture will need thrusters that aren’t off-the-shelf. To make them, Boom will be working with Rolls-Royce. “They have a pretty solid approach for how they’re going to adapt an existing commercial engine for high-speed flight,” Scholl says. “They know it’s going to work; we know it’s going to work.”

Perhaps one of the coolest aspects of the XB-1 and Overture alike is how Boom plans to handle the problem of pilot visibility. A long, pointy nose may be friendly for high-speed aerodynamic flight, but it will reduce what pilots can see during landing, especially if the plane is coming in with a high angle of attack, with the nose pointing further upwards than a typical plane’s would be. Concorde famously had a nose that could move, or droop down, to handle this problem, but XB-1 and its futuristic successor will rely on a camera feed. “We have an augmented-reality landing system,” Scholl says. “The pilot has this display that’s like a virtual window through the nose.”

More specifically, “for XB-1, we have two cameras mounted on the nose gear,” Bill Shoemaker, the company’s chief test pilot, said during the unveiling video on Wednesday. “These give the pilot a virtual view of the runway.”

Boom is not alone in relying on this solution: another supersonic plane, in development from NASA and Lockheed Martin, will rely on a 4K video feed to create a view for the pilot out the front of the craft. With tech solutions like this, it’s critical for the aircraft maker to ensure that there’s no lag, or delay, between what the cameras see and what’s displayed on screen for the aviators.

Boom also isn’t alone in the new supersonic travel space. Boom, along with two other companies—Exosonic and Hermeus—was awarded military contracts to explore the idea of using planes like these to carry government leaders. Other companies in the field include Aerion and Spike. And as Popular Science explored in an in-depth feature last year, the challenges that companies like Boom face in the field are huge: They not only have to overcome technical hurdles, but also somehow make tickets on the yet-to-exist airplanes affordable for most people.

And cheap prices are a cornerstone of Boom’s pitch. Yesterday, during the unveiling of the XB-1, Scholl said that he believes in “a future in which you can get anywhere in the planet in four hours, for just a hundred bucks.” But that idyllic aviation future is not a sure thing.