The aircraft is called GlobalEye. 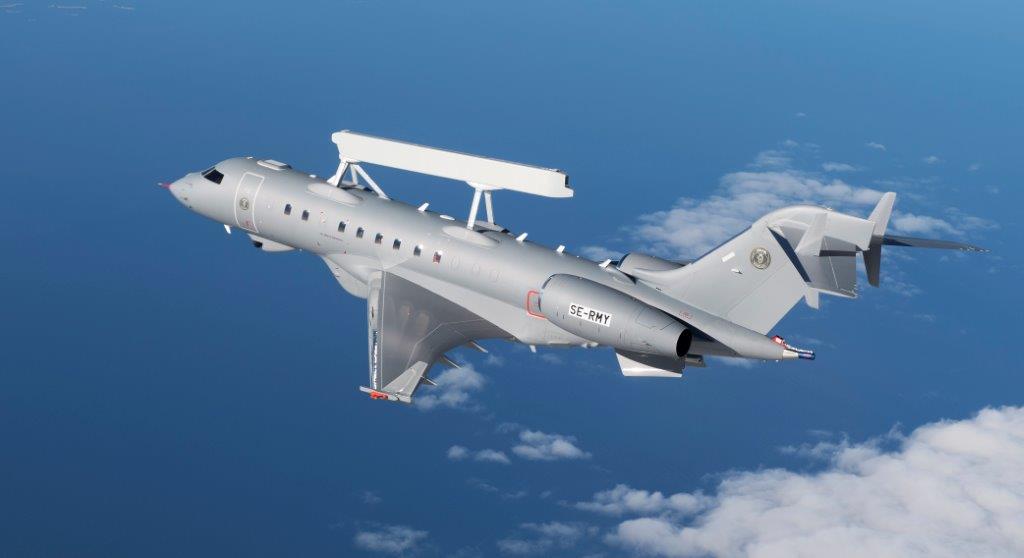 If you ever see a plane that looks as though someone has stuck a large handle, or a giant push-button on the top, then what you’re seeing is an AWACS: a military aircraft that provides countries with an eye in the sky to take a sneak peek from far away at other nations’ aircraft, missiles, ships, and vehicles.

Of course drones or satellites can also accomplish those tasks. But satellites especially can be much pricier than a plane, and they are just eyes: they cannot jam enemy radars, for example. Meanwhile, an AWACS—that stands for “airborne warning and control system”—can do that, thanks to the host of electronic warfare equipment it carries.

The newest AWACS is called the GlobalEye. The plane itself is a Bombardier Global business jet, but Swedish defense company Saab has equipped it with an Erieye ER radar. That’s the 26-foot-long, 1.1-ton “handle” on the top of the plane.

Americans will recognize Saab as a car-maker, but the company actually launched in 1937 as the manufacturer of aircraft for the Swedish Air Force (hence its name, which is an acronym of Svenska Aeroplan Aktiebolaget, or Swedish Aircraft Company). They started making cars 10 years later. Saab sold its vehicle business to General Motors in 2000, and since then has concentrated on the defense sector. Amongst its most notable products are the Gripen combat fighter, the Gotland Class submarine, and the Carl-Gustaf rifle.

So why put a radar on top of a plane when there are powerful ground radars? Because however powerful a ground radar, it cannot cope with the fact that the Earth is curved— and so a missile flying low will not be seen until a few minutes before it hits its target. If the radar is up high, it will have a higher angle of view, and so can detect a low-flying missile or aircraft 20 minutes before it hits the target.

“Most radars detect and measure objects by emitting a very short impulse of an electromagnetic wave that is reflected back by the objects in question,” explains Odile Adrian, who develops radars for French company Thales. “They can ‘see’ in all weather conditions, day or night, several hundred miles away and can distinguish between something that is moving and something that is still,” she adds. They can also measure the object’s distance, the azimuth (the compass direction), elevation (height above ground or sea level), the speed of movement, and what the military call its “signature,” or its shape.

But radar waves can be detected and jammed by adversaries. To combat this, the Erieye ER (the ER stands for “extended range”) on GlobalEye uses a narrow, tough-to-jam radar frequency called the S band.

Erik Weinberg, senior director radar solutions at Saab, explains that the wave must also not lose too much intensity absorbed by water vapor as it travels through the atmosphere, a phenomenon known as atmospheric attenuation. “The choice of radar frequency depends on what you need it for,” Weinberg says. “For long range surveillance, which requires low atmospheric attenuation, the L or S bands are best if you can have a large antenna such as the Erieye.”

Between the two types, the S band is harder to jam thanks to its “small beam and ultra low side lobes,” Weinberg says.

To picture what “side lobes” are in radar, imagine a flashlight. In that case, the side lobes would be like the light spilling out on either side of the main beam. If there’s a lot of spilled light, then your beam is easier to spot by the enemy. “But,” adds Weinberg, “the S-band is more complex to use.”

Petter Bedoire, head of electronic warfare at Saab, explains that they’ve developed GlobalEye because “there has been a dramatic change over the past 10 years,” with the growth of sophisticated jamming equipment. Jamming turns a clear picture into a useless, heavily pixelated one. In order to make it difficult to jam, the beam being emitted by the radar must be as narrow as possible.

In addition to the main radar on top of the plane, the GlobalEye can heft a maritime surveillance radar under its belly, as well as a third radar system designed to spot a moving target on the land, such as a pick-up truck, and then precisely indicate its position to a combat jet or ground troops— which could then attack it.

Saab is creating these planes with a specific user in mind: the United Arab Emirates, which will fly three of them once they’re ready. Future customers buying the jet will be able to decide which combination of radars they’d like, although it always comes with that key Erieye “handle” on top.