The FAA considers putting rules in place for a growing industry. 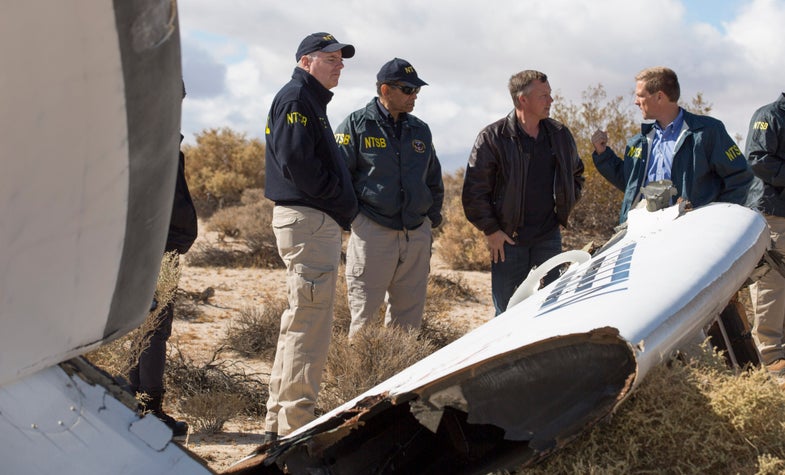 For the past decade, private spaceflight companies have enjoyed very few limitations surrounding the testing and operation of their technologies. It’s all thanks to the Commercial Space Launch Amendments Act, which was passed by Congress in 2004 to restrict the Federal Aviation Administration from introducing any design or operational regulations on commercially built spacecraft. That means as of now, private companies really only need to obtain a testing permit, provide certain safety-related information, and adhere to a few other standards to get their vehicles off the ground.

Well, it looks like the crash of Virgin Galactic’s SpaceShipTwo on October 31 may change all that — meaning government regulations for private spaceflight may be on their way. For now, the FAA is waiting on the results of the accident investigation before it makes any official regulatory changes. But the agency hinted at modifications to come in a recent statement to Bloomberg News:

The idea behind the Commercial Space Launch Amendments Act was to help spur the growth of a very young commercial spaceflight industry. Free of government hindrances, private companies would have the room they need to be creative and innovative with their designs, helping the industry to grow at a faster pace. There was also an unspoken assumption that test pilots, much like mountain climbers and other thrill seekers, know what they’re getting themselves into, negating the need for too much red tape.

“The first death has now occurred, and the FAA will likely revisit the need for regulations, if any.”

Yet this regulation-free environment wasn’t meant to last forever. In 2012, Congress extended the Commercial Space Launch Amendments Act to last until October 1, 2015, with no plans to keep it going after that. Overall, the measure was intended as a freeze on regulations, contingent on the fact that no pilots died or suffered serious injury during spaceflight testing. And as the MIT Technology Review points out, that line has now officially been crossed.

“The moratorium [was supposed to] be in place until a certain date or the event of the first death,” Joanne Irene Gabrynowicz, editor-in-chief of the Journal of Space Law tells the Technology Review. “Unfortunately, the first death has now occurred, and the FAA will likely revisit the need for regulations, if any.”

Michael Alsbury, a pilot for Scaled Composites, died during a test flight of Virgin Galactic’s SpaceShipTwo over the Mojave desert on October 31. The SpaceShipTwo is a suborbital space plane eventually meant to take passengers to the edge of space for a hefty fee.

The National Transportation Safety Board is currently looking into the cause of the accident, but it may be months before the agency has a definitive answer on what happened. According to a statement from Virgin Galactic, the vehicle’s engine and fuel tanks were found intact, indicating the crash wasn’t caused by faulty hardware. Instead, the NTSB is focusing on the SpaceShipTwo’s feathering devices, which are used to shift the spacecraft’s wings into reentry position. It is thought that Alsbury unlocked the feathering feature too early, resulting in the separation of the wings and vehicle mid-flight.

While more regulations may sound potentially debilitating, it does indicate a positive transition for commercial space companies. Private spaceflight is no longer considered to be in its infancy, and a more regulated industry indicates that these technologies are moving into the mainstream. In the realm of commercial airflight, the FAA requires companies to prove that the chances of their airplanes failing is 1 in a billion. Making those kinds of odds standard for spacecraft would mean that taking a ride to space wouldn’t be an extreme sport, but a safe mode of travel.