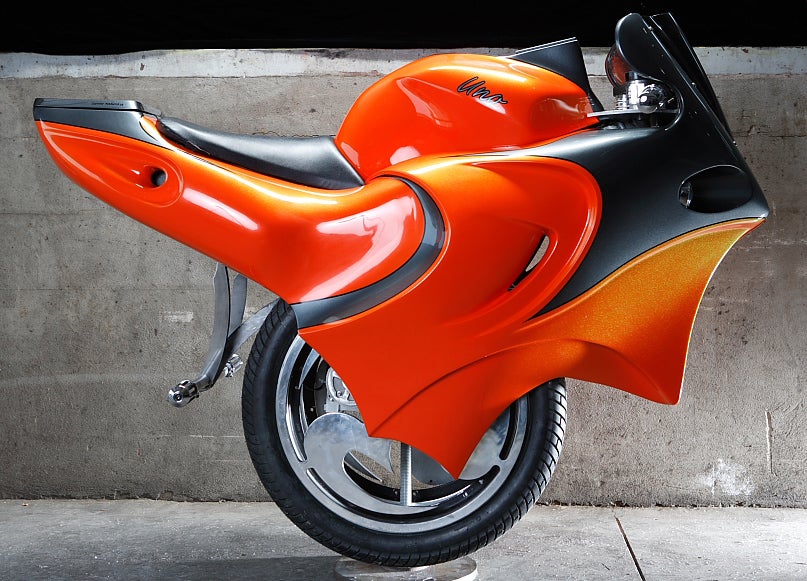 Gulak had a custom fiberglass body built for the Uno.

Uno
Cost to Develop: $45,000
Time: 2 years
Prototype | | | | | Product
Just before his plane dipped into the clouds above Beijing International Airport two years ago, Ben Gulak caught the last clear view of the sun that he would see for two weeks. On the ground, the 17-year-old, who was on a family trip to China, quickly spotted a source for much of the thick haze hanging over the city: smog-spewing motorbikes. Thousands of them, everywhere. “Right then,” he says, “I decided that I wanted to create an alternative mode of transportation, something clean and compact.” 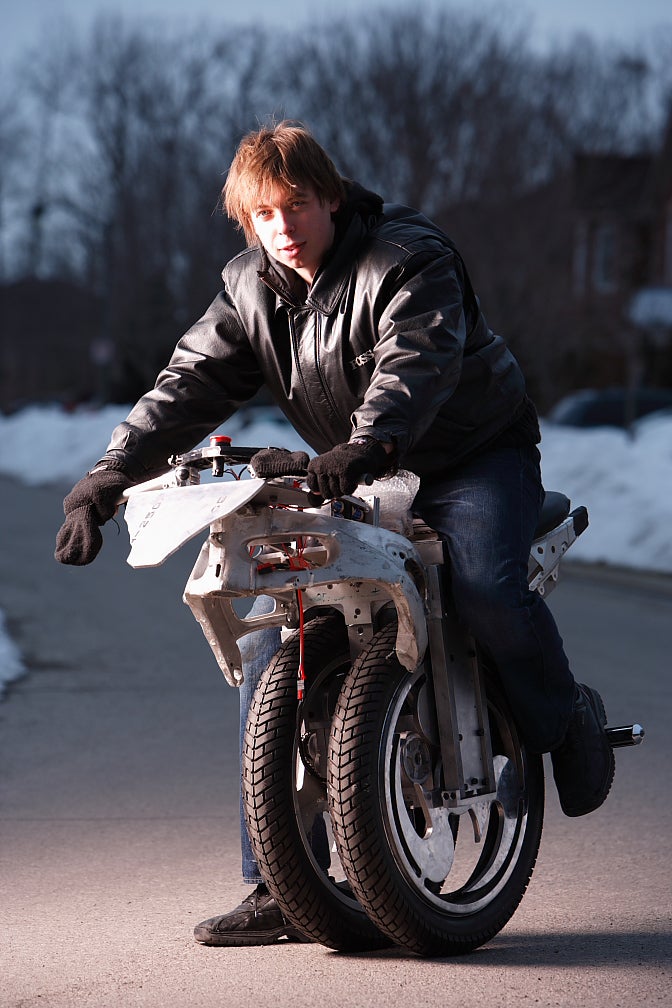 Ben Gulak sits on his self-balancing electric “unicycle” outside his home near Toronto.

When he got home, Gulak drew up a plan for an all-electric unicycle that would emit no fumes and, he figured, be easier to weave through crowded streets than a standard two-wheeler. To give the ride more stability, he put the wheels side-by-side just an inch apart and directly under the rider, who accelerates by leaning forward, as he would on a Segway. When the rider leans into a turn, the inside wheel lifts and the outside wheel lowers, so both stay firmly on the ground.

Gulak put off college for a year (now 19, he enrolls at MIT this fall) and began building the Uno at a motorcycle shop outside Toronto. He modified the frame from a Yamaha R1, which is wider than most motorcycles, so it can house the side-by-side wheels. But he quickly realized that he was out of his depth in the electronics department: He would ride the Uno for a few seconds, and the circuitry would catch fire. So he contacted Trevor Blackwell, a robotics engineer who specializes in self-balancing software. With Blackwell’s help, Gulak equipped the Uno with a gyroscope and a control system that both keeps the rider balanced over the tires and manages the suspension.

The Uno’s two wheelchair motors should, theoretically, give it a top speed of 40 mph, but for safety’s sake, Gulak hasn’t taken it above 15 mph yet. “The only way to figure out if an alteration works is to jump on and ride the thing,” he says. “I’m pretty sure I chipped my kneecap in one crash.”

Gulak’s next task is reworking the suspension to handle more drastic leans, but he says he may need some help writing the code that keeps the Uno balanced at faster speeds. “The fundamental tech is figured out,” he says. “It just needs the right people to tweak it.”