The best automatic motorcycles you can buy in 2019

Eight clutchless machines for the shifting-adverse. 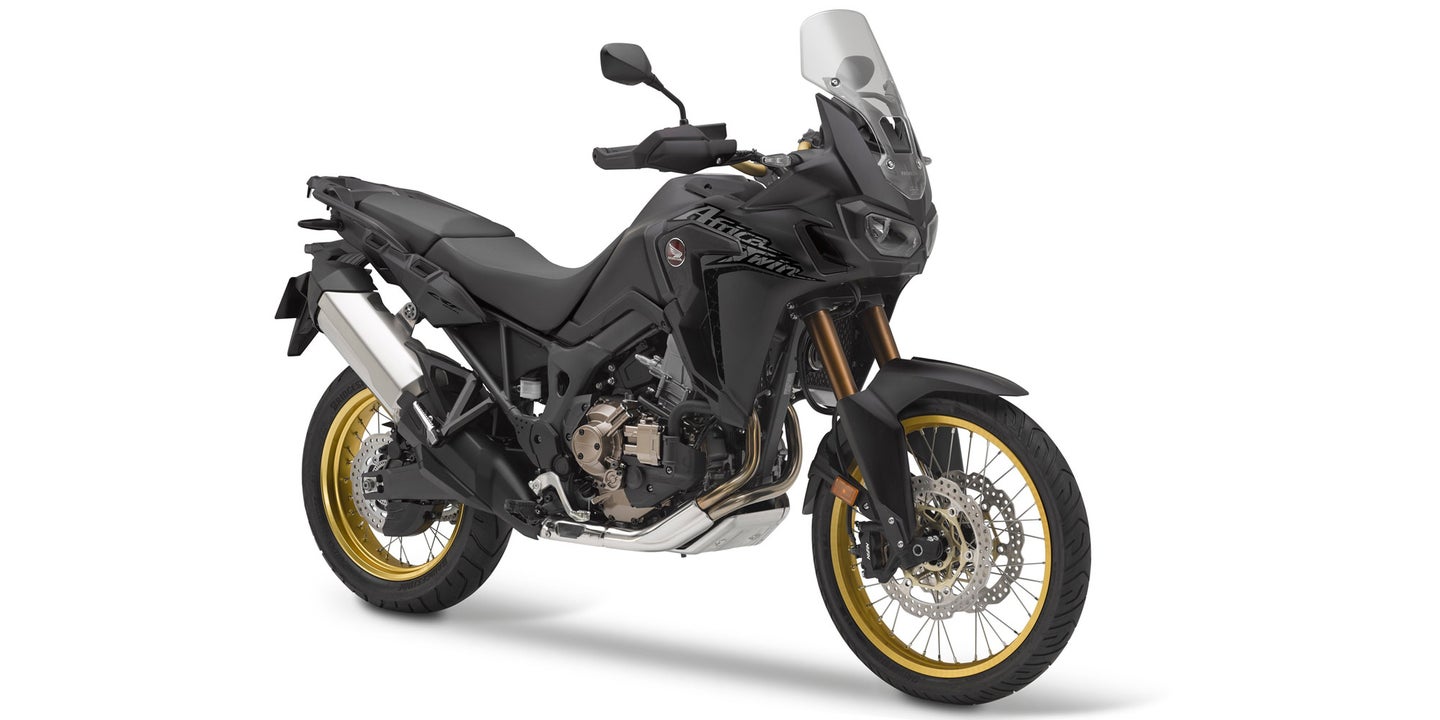 This article was originally published on Cycle World Are you looking to transition to two wheels but feel a bit intimidated by the complexity of shifting? You're in luck. Even though the overwhelming majority of motorcycles today use manual transmissions, there's a growing segment of bikes that don't require any shifting or clutch operation by the rider. And, no, they're not scooters. Yes, we've been down this road before: back in 2006, Yamaha's FJR1300AE/AS model had a semi-auto clutch with electronic shifting, while a few years ago, Aprilia's Mana 850 GT came with a CVT transmission with the option of either full-auto or manual shift. Of course Honda was already doing its Hondamatic thing on the CB750A way back in the 1970s, and Ridley Motorcycle had its three-quarter scale V-twin Speedster and Auto-Glide cruisers with CVT automatic transmissions. But today, it's all (or mostly) DCT. Courtesy of Honda
SHARE

Are you looking to transition to two wheels but feel a bit intimidated by the complexity of shifting? You’re in luck. Even though the overwhelming majority of motorcycles today use manual transmissions, there’s a growing segment of bikes that don’t require any shifting or clutch operation by the rider. And, no, they’re not scooters.

Yes, we’ve been down this road before: back in 2006, Yamaha’s FJR1300AE/AS model had a semi-auto clutch with electronic shifting, while a few years ago, Aprilia’s Mana 850 GT came with a CVT transmission with the option of either full-auto or manual shift. Of course Honda was already doing its Hondamatic thing on the CB750A way back in the 1970s, and Ridley Motorcycle had its three-quarter scale V-twin Speedster and Auto-Glide cruisers with CVT automatic transmissions. But today, it’s all (or mostly) DCT.

The DCT (dual clutch transmission) still uses clutches, but ditches the clutch lever—the bike’s onboard computer does the shifting for you (though you can usually manually override the computer shift via handlebar-mounted switches). We hear die-hards scoffing, but the net result is a smoother shift, more stable launches, and better fuel economy.

Lastly, we should mention that the only truly automatic bikes on the road today are electric motorcycles with a single speed or gear set controlled by an electrical current flowing through the electric motor (instead of mechanical energy acting on many gears). But we’ll sort the electric bikes out there in an upcoming article.

In North America, Honda is leading the charge in the automatic arena, and it has a diverse group to choose from—everything from ADVs to cruisers to touring bikes, and, yes, a maxi (or mega) scooter. Flip through for a list of motorcycles that you don’t have to shift.

Adventurers or touring riders looking for a little less stress on the next expedition might want to check out Honda’s ADV machines, both powered by a 998cc, SOHC, eight-valve, parallel-twin engine. You’ll find automatic Dual Clutch Transmission (DCT) as an option on the base-model Africa Twin as well as the more premium Africa Twin Adventure Sports trim, which gets a bigger fuel tank and upgraded suspension. Big Red touts “consistent, rapid, seamless gear changes” from the now-familiar system, which deploys two clutches—one for start-up and first, third, and fifth gears, the other for second, fourth, and sixth—each independently controlled by its own circuit. You can also swap between three modes; Manual for when you want to shift (with the handlebar triggers), Automatic Drive mode for longer hauls, or Automatic Sport when you want to wick it up in the canyons. Off-road functionality gets a boost with the addition of a G switch, which reduces clutch slip during gear changes. The Africa Twin DCT retails for $14,399, while the up-spec Adventure Sports rings in at $15,899.

With its unconventional styling and utilitarian bent, it should probably come as no surprise that Honda’s CTX700 DCT models share the six-speed automatic dual-clutch transmission with another offbeat Honda model, the NM4 Vultus. Laugh all you want though; the easygoing, 670cc parallel-twin engine and DCT transmission make the CTX about as easy to ride as any middleweight bike you can think of. The DCT system allows riders to go fully automatic, or shift manually using thumb paddles on the left handgrip. Honda calls the CTX700N a “modern cruiser,” but then that’s Honda for you; about the only thing cruisery about it is the relaxed riding position. The ‘N is the naked version, while the straight 700 is ID’d by its protective fairing. While it’s not offered in Honda’s 2019 cruiser lineup, you can probably still find a new 2018 CTX700N model for its original $7,399 MSRP.

The flagship Honda Gold Wing got a much-needed reimagining last year as well as a new naming convention. In addition to the cosmetic reconstruction and a heap of new tech, this iconic heavyweight tourer also received a dual-clutch transmission (DCT) option and a seven-speed one at that (the seventh gear is overdrive). On a bike with this much mass, that can only be a good thing. The Wings share a common engine and chassis platform, but the more naked of the two is considered the base model GL1800 Gold Wing (formerly known as the F6B), while as a Tour variation gets the top box (there’s also a DCT/airbag option). The 2019 base model Gold Wing rings in at $25,000.

Crossovers are big in the car world, so why not aim for the same on two wheels? On its website, Honda tags the NC750X as one bike to “do it all” and you could argue that mission gets easier with a liquid-cooled, two-cylinder, 745cc engine that has available selectable torque control as well as the automatic DCT option, allowing for fully auto operation or manual shifting. With a neutral, semi-upright riding position, a tallish windscreen, integrated storage, and fairly low center of gravity, the NC750X ticks enough boxes for riders looking to commute during the week yet still have enough punch for weekend bombing runs or sporty canyon duty. The engine has been tweaked and styling smartened up since the bike’s introduction as a 700 years ago; the NC750X is looking fully formed these days. Pricing is yet to be announced for 2019, but we’d expect it to come in around $9K for the DCT version.

The Honda NM4 is kind of an unclassifiable freak. Your eyes will clearly tell you this is no conventional motorcycle, but would it be fair to call it a maxi-scooter? Even the Honda catalog agrees that the radical NM4 “is all about riding a bike that doesn’t look like it came out of someone else’s cookie-cutter idea.” The motivational chops come in the form of a 670cc fuel-injected parallel-twin engine designed for a wide power spread and easy automatic operation thanks to that ubiquitous DCT transmission. Those roomy saddlebags are integrated, as is the windscreen and flip-down passenger seat, which is probably why Honda lists this model under its Touring category. The NM4 doesn’t look to have made Honda’s 2019 lineup, but it is listed as an available 2018 model for a hefty $11,299. Futuristic styling and advanced design don’t come cheap, but you can rest easy knowing you won’t look like anyone else on the road.

Electric, yes, but, hey, it’s not a Honda. We’re also mentioning the KTM Freeride E-XC because dirt riders need options in the automatic category, don’t they? Not only that, but the Freeride E-XC is the first electric off-road motorcycle from a mainstream motorcycle brand, and it’s propelled by KTM’s E-Ride technology. The E-XC may look like a straight-up dirt bike, but its electric motor also comes with a single-speed transmission so you can focus on the single-track rather than the gear you’re in. On the down side, range is pretty sparse and the sticker price of $8,299 (for the 2018 model) is a hefty bit of coin for a playbike; extra PowerPacks will set you back another $3,600. But if you consider the cost of gas, fluids, and other maintenance items you’ll go through in a season with an internal combustion bike, it’ll probably work out to be close in total price.

Again we’re including an electric bike here, but then all Zero motorcycles come with a single-speed transmission that doesn’t require shifting. And because Zeros have been recently used in rider training scenarios around the country, we know they’re not intimidating but extremely user-friendly. The top-of-the-range Zero DS and DSR are dual-sports, which means you’ll be as comfortable riding off-road as on the street, and for 2019 the entire Zero Motorcycles lineup received a host of upgrades, including better range, improved charging, and a higher top speed. Those are all good things in our book, regardless of the absence of a clutch lever. A short-range base-model FX can be had for under $9 grand, while the up-spec DSR will run you $16,495.

Yes, the new Super Cub has a step-through design, but Honda wanted to be clear that it didn’t see the machine as a scooter so it listed the bike as a Motorcycle on its website. After all, motorcycles require a manual or semi-automatic transmission, while scooters are all automatic. But regardless of how you categorize it, c’mon now, it’s pretty cool. With its small, efficient engine, wallet-friendly price, and vintage styling, the 2019 Honda Super Cub C125 ABS may be the best way for some beginner types to start off on a motorcycle. At its heart is a fuel-injected, air-cooled, single-cylinder engine propelling a wet weight of just 240 pounds with standard ABS. Which makes it an ideal setup for commuters too. And because it’s semi-automatic, with a centrifugal clutch (no clutch lever, but you still have to select the gear) that makes it easy on new riders while still letting veterans get a little bit looser (but not by much). The $3,600 price tag might seem a bit steep for a beginner bike, but it still looks like a winner to us.