The best car and automotive technologies of 2020 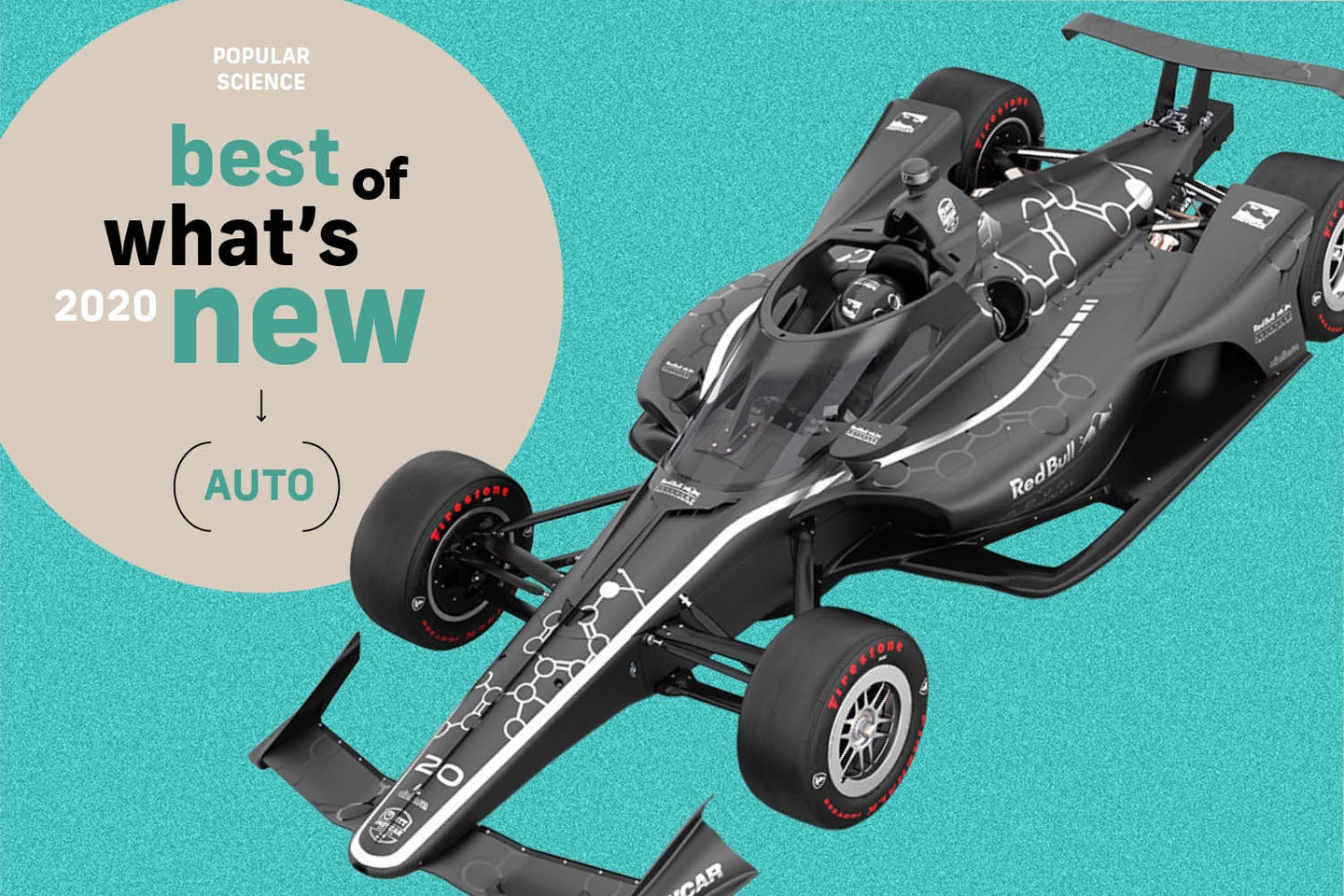 The year's most important developments in the world of autos. Indycar
SHARE

Your car may not have gotten the kind of use it usually does this year. Travel restrictions put a lot of wanderlusty road trips on hold for the moment. Meanwhile, folks who had to trek to work increasingly opted to drive over riding public transit. And yet, the auto industry has continued to push technology forward. When we’re all back into our regularly-scheduled cruising habits again, the vehicles on it will be a little safer, comfier, and even more efficient. This year’s top automotive innovations include a seat built for snoozing as well as upgrades to key safety features that will save lives.

In the US, car accidents account for more than 16,000 fatal brain injuries every year, and a portion of those happen in the passenger’s seat. Acura’s 2021 TLX features a uniquely redesigned bag that eases impact on those delicate noggins. While a conventional airbag inflates into a bulbous balloon that heads can easily slip or slide off, the TLX’s offering looks more like a catcher’s mitt. Immediately after impact, three chambers inflate, two of which extend out to wrap around the rider, gently guiding their head into the bag like a baseball going into a well-padded glove. The formation cushions passengers earlier in impact than past models and keeps them cradled on the airbag during an off-center hit. Ultimately, the design promises to reduce the profound rotational forces that slam brain tissue into the skull during a wreck. Though the bag debuted in the TLX, Acura’s parent company, Honda, has agreed to let other manufacturers use the technology down the line.

The truck anyone can offroad

Legend has it that the original Bronco was referred to as the GOAT—”Go Over Any Terrain”—during its development in the 1960s, but getting the truck to transverse changing paths required specific skills like knowing when to lock the differential for traction—or knowing what a differential is in the first place. The new 2021 Bronco offers a GOAT mode that hands the work off to onboard computers, making the shift from, say, sand to turf, quick and easy. The system taps traction-control sensors to analyze driving conditions and make adjustments to maximize grip and ground clearance. For instance, it’ll tweak the linkage and the power going to the wheels so the tires grip better on uneven terrain. Even on the street, there’s plenty to appreciate, including doors that come off with just a single bolt and plug, and a manual transmission option for purists.

Pull-down sun visors can block huge chunks of the view through your windshield as you drive. Bosch’s improved version keeps the same basic shape but uses a transparent, tintable LCD instead of the opaque flap we’ve tucked sunglasses and keys into for decades. A camera monitors the driver’s gaze as well as incoming light; it then signals the honeycombed display grid to selectively darken just enough to block glare. When the sun tucks behind a cloud or starts to set, flip the visor back up, just like you would in any car.

A sleeper seat for cars

Deep reclines during transit are typically reserved for flying business class, but BMW’s ZeroG Lounger brings the snooze-fest to the passenger seats of crossover SUVs. In addition to the typical upright position, the seat can lean back to a luxurious 60 degrees. That’s typically unsafe when the car is moving, so BMW mounted the seatbelt on the left side of the passenger so it stays tight to the body even in a deep recline. In the event of an accident, a 360-degree cocoon airbag deploys to completely encompass both the seat and its occupant for maximum protection.

Base Rack by ARB

Protruding tie-down points on conventional roof racks limit the way you can arrange your gear. On the Base Rack, however, each extruded aluminum cross-beam has a dovetail-shaped rail running along each side, which means accessories like ratchet straps, rollers, and spare tire straps can attach at any point in just about any orientation. The welded slats are sturdy enough to eschew the need for a supportive subframe, which allows the rack to sit closer to the roof of the vehicle, improving aerodynamics. And, because the supports are hollow, wiring for accessories like solar panels can live inside where they’re protected from the elements.

Relatively heavy rubberized boards line various areas of your vehicle to prevent noise from creeping into the cabin. They do an excellent job, but they also add considerable weight, which saps fuel efficiency. So Nissan developed a material that blocks sounds between 500 and 1200 hertz—the range encompasses noises like tires rolling across the ground and engine rumbles—but that weighs just one-quarter of the most popular dampening options. The material’s plastic-film-and-lattice formation is also considerably thinner than typical insulation, so manufacturers can add more of it to keep outside sounds on the outside.

Audio you don’t have to shout over

When the mood in the car shifts from rockin’ out to gossip, a sound system equipped with Harman’s newest software can adjust the volume of the stereo for you. The system uses mics placed strategically throughout the cabin to actively analyze noise, which allows AI to determine if the audio needs to stay out of the way of your chatter. The algorithm can tell the difference between a conversation and a quick interaction, so it’ll only duck down the volume for actual talking. Of course, you can manually override the system and crank the tunes as high as you want if you get sick of making chit-chat.

Self-driving vehicles and UAVs rely on a technology called Lidar to see the world around them, but the sensors tend to be bulky (and expensive) appendages to otherwise tidy rides. Velodyne’s Velabit modules are just 1.38 inches thick and 2.4 inches long and wide, which makes them small enough to discreetly hide under a fender. Each unit has a range of up to 328 feet and offers a 60-degree-wide field of view. Perhaps most importantly, they cost just $100 a pop, which means manufacturers and researchers can build robust arrays to increase the situational awareness of self-driving vehicles or drones without having to spend thousands of dollars.

The fastest-charging EV around

The most impressive feature of Lucid’s all-electric luxury car works when the vehicle is sitting totally still. Using the company’s new fast charging technology, it can pull in roughly 20 miles of range for every minute it spends on the plug. That’s faster than anything else on the market. The first version of the sedan—the $169,00 Dream Edition—also offers 1,080 horsepower, over 150 mph, and a range of up to 517 miles according to EPA’s estimates.

Motorcycles have had the smarts to help riders avoid looming collisions for a few years now, but that intelligence has had its limits. This year, Ducati partnered with Bosch and the University of Milan to deliver the first true cruise control on a two-wheeler. With the speedometer set anywhere between 19 and 100 mph, a radar sensor on the front of the bike helps the system keep a safe distance from the car in front of it. Carefully tuned acceleration won’t jerk the rider around as much as it would in a car, while a second sensor at the rear keeps a lookout for autos entering the bike’s blindspots.

Commuters and racers typically have to choose between riding configurations when they shop for a new ride. Using the same basic technology that moves the power seats in your car, however, the Hypersport lets cyclists adjust the handlebars, foot pegs, and windscreen—effectively shapeshifting the 200-mph electric bike and tailoring it to their personal size and preferences. Headed to the track? Tilt down the handlebars for an aggressive forward-leaning posture. Commuting? Slide everything back to sit upright.

Aeroscreen by Indycar and Red Bull

In 2015, Indycar driver Justin Wilson was killed when the nose of a crashed car hit him in the head at the Pocono Raceway. That’s just one of the many deaths and injuries the open cockpits on some of the fastest racecars in the world have caused, which is why Red Bull and Indycar developed the Aeroscreen protective windscreen for the 2020 season. Its titanium frame can withstand up to 34,000 pounds of pressure before it crushes, and the ballistic polycarbonate transparent shield itself can endure impacts at speeds of up 2o 220 mph. In July 2020, the shield protected driver Will Power from a flying wheel on the track that would otherwise have resulted in a possibly deadly strike.