This Is Now The World’s Lightest Material

This one's made of carbon, and it's super absorbent, too! 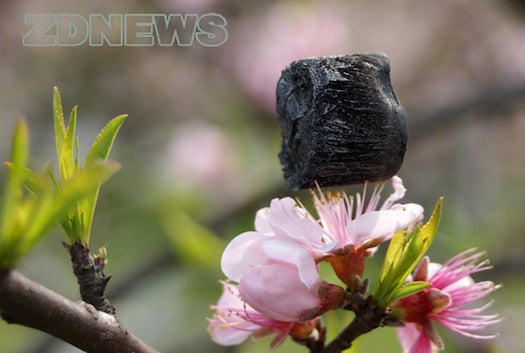 Check out this contender for the title of “world’s lightest solid.” To demonstrate just how light it is, Zhejiang University in China, where the material’s creators are based, has published pictures of chunks of it perched on small leaves, held aloft by grass seedheads and floating on the stamen of a cherry blossom. Ah, springtime.

It’s still in its earliest stages of development, but in the future, the new material could be designed to soak up oil spills or clean other pollutants, Gao Chao, the lead scientist in creating the material, told China Daily. The materials used now to clean up spills absorb 10 times their weight in oil, but the new stuff can handle 900 times its weight in oil. And it absorbs quickly, Chao said, with each gram of material sucking up 69 grams of oil a second.

The material is about one-sixth the density of air.
The material is made with one-atom-thick sheets and fibers of carbon, so Chao and his colleagues have dubbed it a carbon aerogel. The researchers say they’ve found simple ways of making the carbon aerogel in various shapes and sizes ranging from bottle-stopper-size to tennis-ball-size.

In the end, it doesn’t really matter too much which material is the lightest in the world. They’re all quite different in composition and can do different jobs in the world. And they all look amazing floating on flower stamen, eyelashes or whatever else.

Chao and his team published their work in February in the journal Advanced Materials.