In constant darkness, Arctic krill migrate by twilight and the Northern Lights

Polar krill have eyes that are ultra-sensitive to daily light cycles. 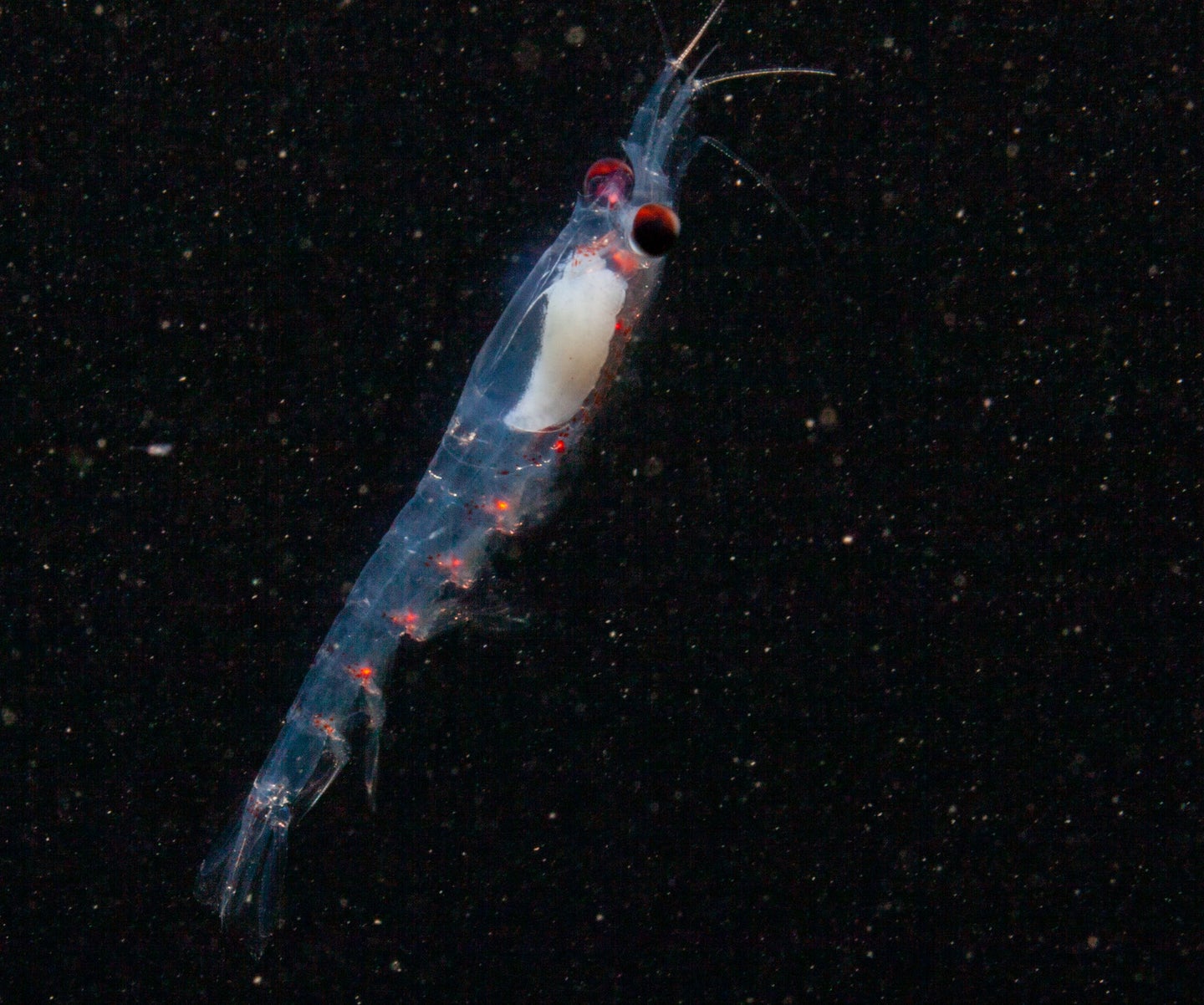 The sea below the North Pole is a very dark place, especially in the dead of winter. Polar Night, when the sun never rises, lasts for months. The days are punctuated by brief periods of midday twilight when the sun passes just below the horizon. That weak purple light is filtered by sea ice, then the water itself.

But underneath the ice, Arctic krill manage to keep the rhythm of the day and night all winter long. Krill are shrimp-like animals that form the base of many underwater ecosystems, eating plankton and other vegetation, and being gobbled up by the thousands by whales and fish. Like many deep-sea invertebrates, they go through a daily migration, spending the daytime hours 1,600 feet down—about the height of the One World Trade Center—and nights near the water’s surface. That’s true even among krill in frigid polar waters.

To set their circadian rhythms during the long darkness, polar krill have developed eyes that become ultra-sensitive with daily light cycles, according to findings published today in the journal PLOS.

Krill gathered from the coast of Svalbard, an island in the Arctic Circle, showed changes in light sensitivity on a roughly 21-hour cycle, which the researchers measured by flashing their eyes with a dim light in the lab. Their eyes were most sensitive during “subjective night”—when the sun is furthest from the horizon—when the krill would be near the surface.

“During the Polar Night, traditional definitions of day and night… become irrelevant,” the authors write. But just enough light around noon each day penetrates the water’s surface that the researchers believe the krill can use it to keep winding their internal clocks.

And there are natural clocks besides the sun. Both the moon and the Northern Lights give off light that might signal the passage of time to the krill.

But why exactly the krill would want to stay on a daily rhythm when the 24-hour cycle is apparently meaningless is still somewhat of a mystery. A previous study in reindeer found that the animals actually turned off their circadian clocks during the endless Polar Night months.

The researchers believe that it has something to do with the other organisms living alongside the krill in the twilight. Perhaps they’re chasing some kind of bioluminescent prey, or escaping predators. And having eyes that adapt to changing waters could be a benefit. As the researchers note, krill camouflage themselves with their own bioluminescence—when there’s light filtering in from above, they light up their bellies to blend in. “This casts a light shadow,” the authors write, “visually masking them from predators below.”