Turrell, whose solo exhibit at the Guggenheim closes Wednesday, doesn't just play with the way our eyes work; he exploits how our mind processes images to reveal that at a fundamental level, everything we see is an illusion. 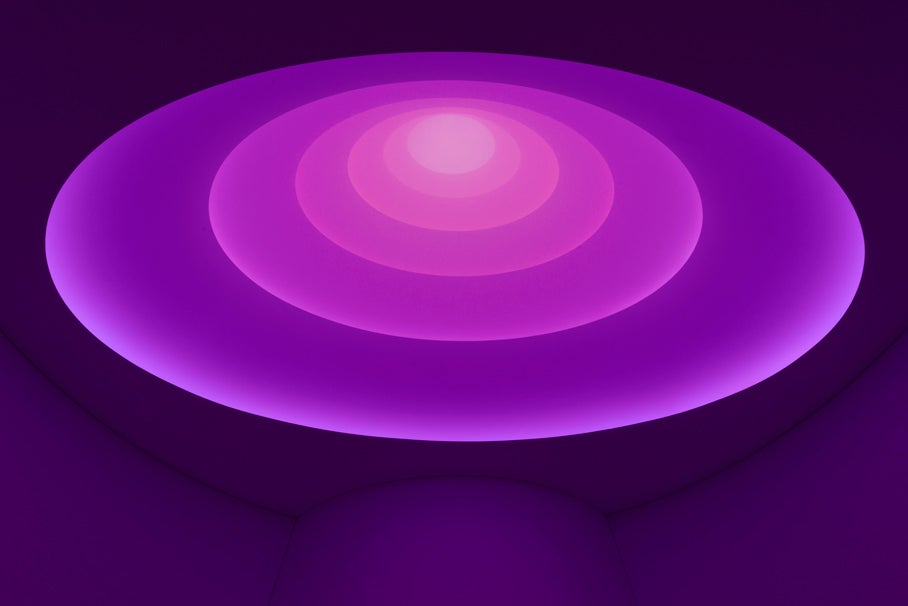 This has been the summer of James Turrell. In and out of the art world, everyone’s talking about the artist, whose simultaneous exhibitions at the Guggenheim in New York City, the Los Angeles County Museum of Art (LACMA), the Museum of Fine Arts in Houston and now, even a shopping center in Las Vegas have stretched his disorienting, mesmerizing explorations of light and space from coast to coast.

Best known for his still-under-construction, behemoth naked-eye observatory in an extinct volcano in the Arizona desert, Turrell has transformed the Guggenheim’s famous rotunda from an open atrium into a giant orb of glowing color for the summer. Many visitors will lay stretched out on the museum floor for minutes or even hours underneath it, patiently staring up like it’s some sort of celestial event.

Part of what makes Turrell’s work so salient is that, on a basic level, he’s playing with the science of how we perceive the world, using his knowledge of our retinal structure and visual system to upend what we think “seeing” really means. Since his days as an undergraduate psychology major, he’s been carefully exploring and manipulating the ways people’s eyes and brains process light and space, reminding us that at a fundamental level, everything we see is illusion.

His work draws on a background of psychology and mathematics that’s somewhat unusual in the art world. “[M]ore than most artists he considers the boundaries between science and art,” as Guggenheim co-curator Nat Trotman writes in his exhibit’s catalog.

Turrell studied perceptual psychology at Pomona College in the 1960s, and later, in pursuit of a master’s degree in art, started experimenting with how beams of light can transform depth perception, appearing to occupy three-dimensional space in a room. He fascinated with what he calls the “thing-ness” of light, the idea that light isn’t just a way to illuminate objects, but an object itself.

Early in his career, he also began to play with what’s known as the Ganzfeld effect, (“whole field” in German), a disorienting perceptual experiment that consists of filling the entire field of vision with a solid, undifferentiated color. Without any contrast to occupy the brain, it becomes like sensory deprivation, and visual blackouts and hallucinations can sometimes occur. 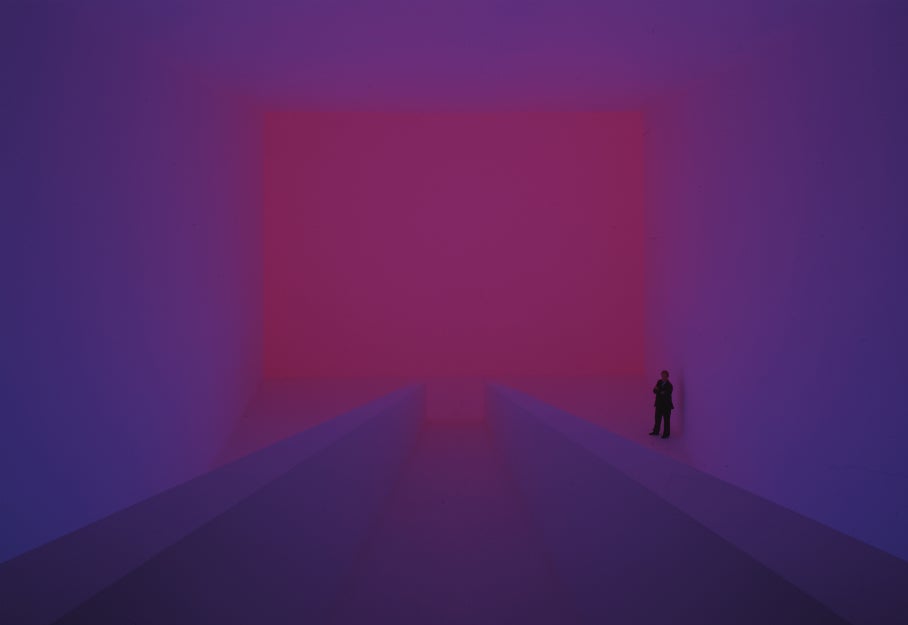 “Turrell’s work tricks the brain,” explains Benjamin Backus, an associate professor at the Graduate Center for Vision Research at the SUNY College of Optometry. Rather than playing with the way the eye itself works, as many optical illusions do, his art often exploits the way our mind processes an image.

One of Turrell’s favorite visual tricks is the result of something called a dichotomous perceptual decision.The phenomenon is perhaps best explained through one of Turrell’s early pieces, Afrum I (White), on display at the Guggenheim now. A very bright, even light in the corner of an otherwise completely dark room gives the appearance of a floating, three dimensional cube popping out of the wall. Your vision intermittently shifts between perceiving the light as a solid cube and a flat beam of light, because your brain could technically see the image either way. 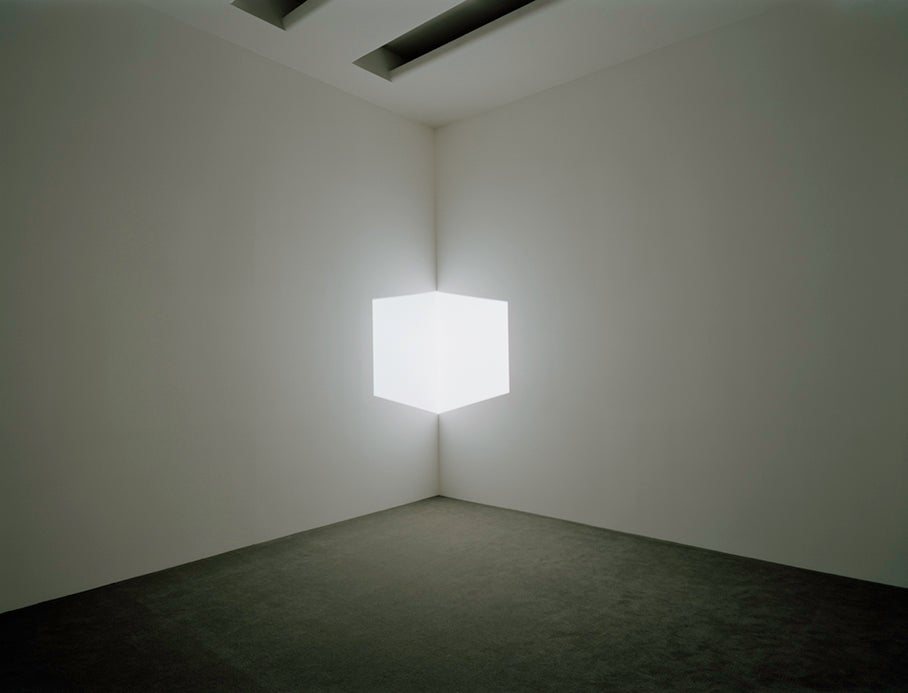 The light projects from a corner of the room near the ceiling, casting a particular shape on the opposite side of the room, according to Backus. “When it hits the wall, it’s kind of a butterfly shape,” a hexagon of illumination with its top and bottom points nestled directly in the corner of the room. To put it a little differently, each of the two walls has a trapezoid of light, with the longer common edge between the two shapes aligned with the corner.

The brain tries to interpret that longer edge in the center as being closer, even though it’s a light on a concave corner of a room, creating a dichotomous perceptual decision. Your brain is able to perceive it as either one thing or the other, and it can’t decide between the two. Sometimes it seems like a concave corner, while other times the light seems to be a solid coming out of the wall.

“What he plays with is the back and forth your brain does,” Backus explains. There’s no change in the way your retina responds to what you’re seeing, just in the way your brain decides to interpret it. “This is the decision made by your visual system for you unconsciously and automatically. Your brain just decides for you whether it wants to interpret that image as a cube popping out or a light projected into a corner.

Nat Trotman, the Guggenheim curator, puts it a different way: “It’s just playing with the learned perceptual activities of our eyes,” he says. “There’s a conflict between what our perceptions tell us we’re looking at and what we’re actually looking at.”

In contrast, the power of Turrell’s latest work, Aten Reign lies less in our brains than in how our photo receptors and ganglion cells in the retina deal with colored light. The centerpiece of the artist’s Guggenheim exhibition, built especially for the space, creates five oval rings of solid, slowly changing color that fills the museum’s ground floor. Turrell enhances the intensity of the already-overwhelming, somewhat psychedelic color by manipulating the eye’s natural tendency to adapt to a light source.

The Guggenheim exhibition’s co-curator Nat Trotman describes the piece’s construction in one of the museum’s introductory videos:

The piece is built as a series of cones that proceed through the space, starting about 25 feet above the floor of the museum and proceeding almost to the top of the space. Between the viewer and the daylight, there are five concentric rings of LED fixtures that shine upwards, filling five separate conical chambers with slowly changing light. Like many of Turrell’s works, the piece is intended to create a contemplative or meditative atmosphere.”

With 950 LED light fixtures forming five rings, standing in what normally would be the Guggenheim’s open, sun-lit lobby feels like being inside a series of giant colored eggs. The LEDs shine upward, lighting up each of the chambers constructed inside the famous Frank Lloyd Wright rotunda. The top section mixes artificial light with the natural light from the museum’s ceiling, normally a window to the sky outside. The colored light fills the entire atrium, slowly shifting in hue, designed in such a way to maximize the intensity of each color.

“Aten Reign does cause changes in the retinal image that are part of the effect in the viewer. It has these very large planes of color,” Backus explains. “Your eye will adapt to them that causes the next color to have a very different qualia–the experience of a sensory stimulus. The qualia is different for the same light depending on what came before because you adapt to the light from before.”

The LACMA catalog of the artist’s work describes it like this:

Turrell had noticed that our perception varies in common situations as well. At dusk a red flower will appear darker and blacker, while a blue one will appear brighter. This is because when light is present, our sight relies on the cones of the retina (photopic vision); in darkness, it depends upon the rods (scotopic vision). When the shift between cones and rods occurs, human vision is compromised, leaving us virtually color blind. And in total darkness, the body’s other senses become triggered and awareness is heightened. In the absence of light, an artwork becomes “about your seeing,” Turrell noted. “It is responsive to the viewer. 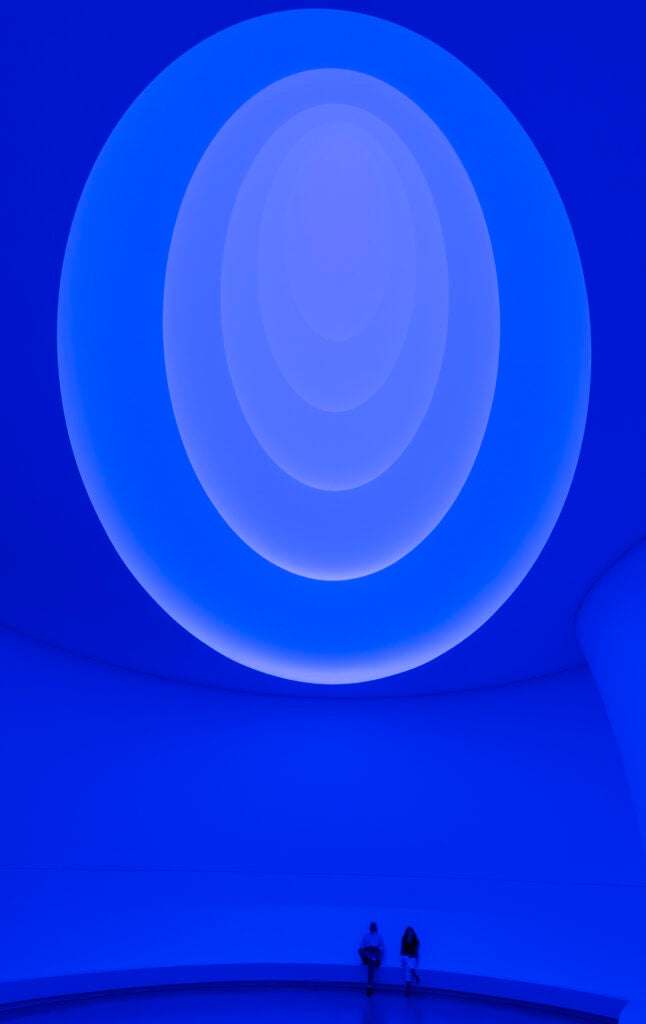 After spending enough time looking at one color, our vision normalizes, and the color saturation doesn’t seem as intense as it did right off the bat. When you look away from that color, though, your eyes take a moment to readjust, sort of like the white balance in a camera, leaving lingering splotches of color in your vision. Seeing green after a long period staring at pink, for instance, intensifies the green you see, because your eyes have adjusted to adding a bit of the green to the world to balance out the pink, its complementary color. “He’s programmed the colors you see take advantage of that,” Trotman says.

“Part of the appeal of Aten Reign is just the technical sensory experience. I’s a technical tour de force. Those smooth lines, that large sense of overlapping, homogeneous color,” Backus marvels, makes it an unusual object in our visual environment. “The three-dimensionality of the piece is extraordinary…it’s like being in a big beehive.”

Unlike some of his earlier works that explore a more classical interpretation of a Ganzfeld, in Aten Reign, the light is broken up into different sections that provide contrast within the otherwise solid field of light. But there’s still something of a Ganzfeld experience in the mesmerizing bath of light swirling around in the Guggenheim’s central atrium.

“Because there’s such a slow change in color [across the surface], there’s literally nothing to see. There’s nothing for your visual system to fixate on,” Backus explains. “There’s nothing with contrast in it between those levels. From one edge to the next, it’s just color. There’s no speck of dust there’s just nothing, nothing at all, just the color between the levels. It’s kind of like having each one being its own separate Ganzfeld.” 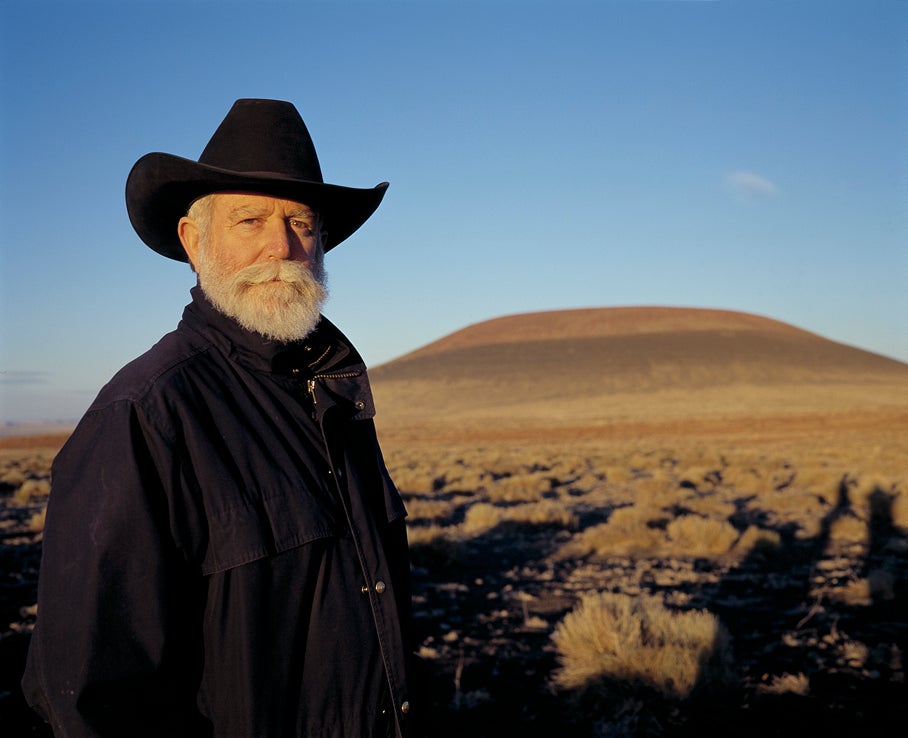 The artist in front of Roden Crater, his unfinished masterpiece in the desert near Flagstaff, Arizona.