Tomatoes and subway systems might have something in common

They're both just trying to get the biggest bang for their buck. 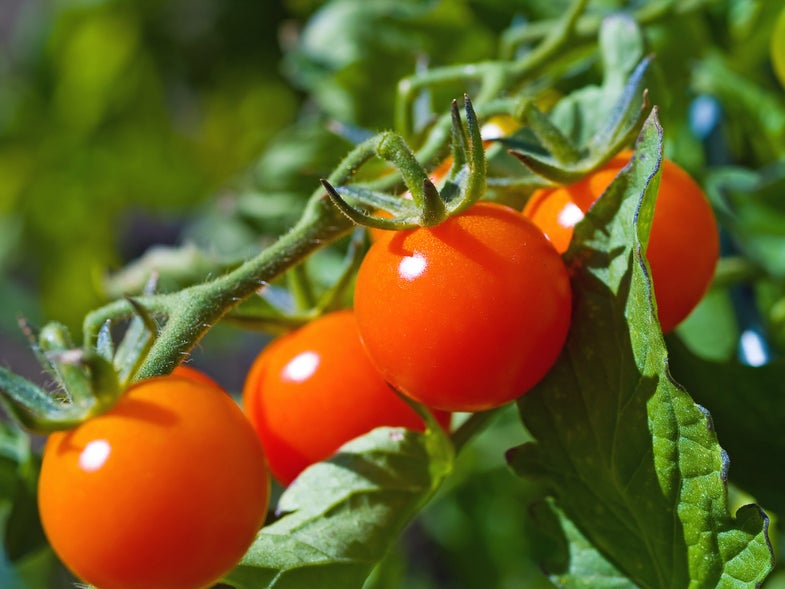 When people design transportation systems, they are usually trying to find the sweet spot where they can get people to their final destinations as quickly as possible, while minimizing the cost of building the infrastructure. It may not always work (this summer’s unfolding New York City subway debacle is a prime example), but it turns out that plants take a similar approach.

A study published today in Cell Systems investigates how plants balance cost and performance to develop their complex, branched structures. But instead of using purely biological methods, the researchers drew from an unexpected field—computer engineering.

“A lot of the problems we think about in engineering—such as efficient, robust and low-cost networks and structures—are also faced by evolution,” says Saket Navlakha, senior author of the study and an assistant professor at the Salk Institute for Biological Sciences. “Solving these basic engineering problems gives organisms the chance to survive and adapt to the real world.”

Navlakha and his colleagues grew three different types of plants (tomato, tobacco and sorghum) in normal growing conditions and modified conditions, such as shade, heat, increased light and drought.

Then, they imaged the plants with a 3D laser scanner that works sort of like a reverse 3D printer: It creates a digital image that retains all three dimensions of the original item and none of the background noise. It’s better than taking a photo because you get richer details, like the thickness of the leaves, Navlakha says.

In total, they characterized 505 plant structures, which they analyzed as networks, or collections of points and edges. For example, the base of a plant would be one point, each branch was an edge, and each leaf was another point. This allowed Navlakha and his colleagues to analyze the structure of the plant the same way city planners might study a transportation system: as a network of connections that ferry things between points. People travel from one station to another. Water and nutrients travel from the plant’s roots to its leaves for photosynthesis.

It may seem strange to think about living things like inanimate machines, but it’s a growing field. “In silico biology is the emerging frontier,” says Jonathan Lynch, a professor in the Department of Plant Sciences at Pennsylvania State University who was not involved in the study.

According to the team’s findings, it’s all about trade-offs.

Navlakha focused on two main parameters: the total length of all branches and the distance that nutrients would need to move to reach leaves. For a plant to be efficient, it shouldn’t use too much of its resources on forming branches—but it also shouldn’t take too long for resources to reach the ends of its existing routes. His team found that, over time, plants come to grow in a pattern that allows them to minimize both of those parameters as much as possible. But it takes compromise; after all, having a direct branch to a leaf might shorten the distance resources must travel, but it increases the total length of the plant’s plumbing system.

This balancing act corresponded almost perfectly with what’s called the Pareto curve, the “best case scenario” when you’re trying to optimize two variables. Even when the plants were subjected to different conditions, they still stuck close to these optimal results. Even in droughts, heat, or darkness, the plants still try to minimize total length and distance travelled as much as possible. Which they prioritize over the other has to vary in order to maintain the balance.

“All plants are pushing toward this optimal tradeoff between the two objectives,” Navlakha says. “The way they choose might depend on which condition or environment they’re in.”

The only exception was when the team exposed the plant to more light than usual. The branch structure that developed under those conditions didn’t seem to be the most efficient option. Although the paper only focuses on total length and distance traveled, the authors acknowledge that other factors may be at play as well, which could explain the differences that cropped up under increased light.

Navlakha thinks these new findings could help guide efforts to engineer the genomes of crops for increased yield. If modifying a gene affects a plant’s ability to optimally guide its branch growth, it could hurt its chances of survival.

He also hopes that the partnership can be inverted: instead of plant biologists learning from computer science, computer scientists could learn from biology. Optimization problems—like the trade-off that plants face every day as they grow—help engineers design systems that can tackle complex obstacles with a limited amount of computing power.

“We’re also interested in seeing if there are new strategies from plants that can be used when designing these algorithms,” Navlakha says.

This isn’t the first time that natural and man-made networks have mirrored each other: Multiple research groups have found that if they place oat flakes in the pattern of major cities, slime mold grows in formations that look just like the rail system that connects them—and sometimes, it finds an even better route.