Ancient Meteorite Was Once An Asteroid-Smasher

Fossilized evidence of a 470-million-year-old collision 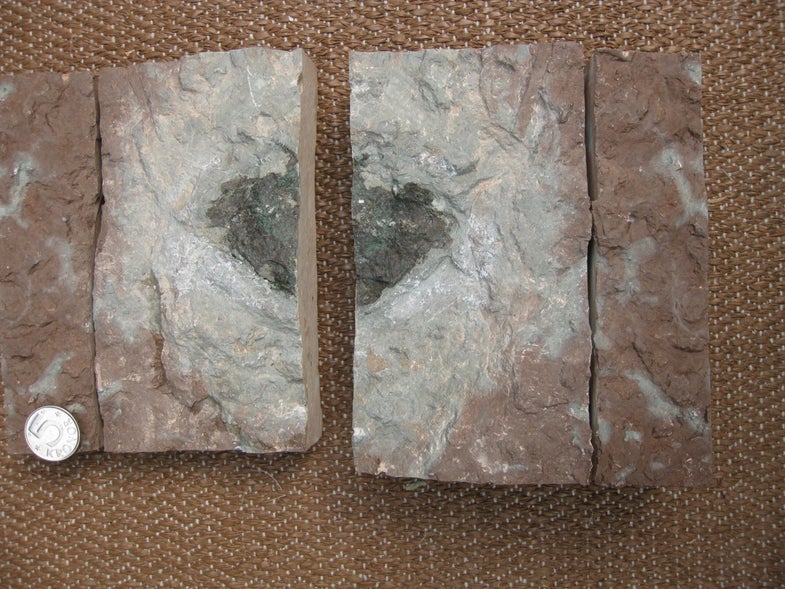 This is the extinct meteorite that was involved in an out of this world collision 470 million years ago. Birger Schmitz
SHARE

In a paper published this week in Nature Communications researchers provide an interesting tale about the fossilized remains of an meteorite that hit the Earth long before dinosaurs ever existed. They propose that it is the only known remnant of an ancient asteroid that collided with another asteroid deep in space.

The meteorite, Österplana 065, slammed into the Earth 470 million years ago, accompanied by a hail of 100 other common meteorites known as L type chondrites, one of the more common types of meteorites to be found on Earth (and maybe even Mars). The meteorites landed in a sea where layers of limestone formed, swiftly encasing the meteorites in protective layers of rock where they stayed for millions of years before people in Sweden began quarrying the beds for floor tiles.

Both asteroids fragmented in the impact, with one generating the many many meteorites that ended up falling to Earth as L type chondrites. But the other was mostly obliterated in the collision, with Österplana 065 as its only remains here on Earth. The researchers consider it to be the first known example of an “extinct meteorite”–no other meteorites from that original asteroid are ever likely to fall to Earth again.

The meteorite in question was first identified in the quarry back in 2011, and has been studied for the past five years. Though it is now known as Österplana 065, it was known simply as the ‘mysterious object’ until recently, even after a study in 2014 indicated that yes, this was probably the remains of the second celestial body involved in the asteroid-exploding impact that gave us our regular rain of L type chondrites.