How Does A Penis Transplant Work?

Here's what the first American recipient will undergo 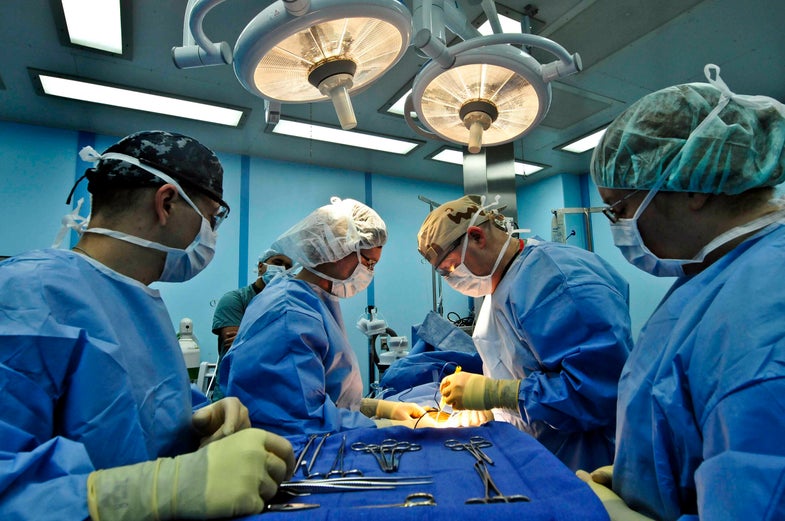 Soldiers give up a lot when they’re defending their country. For those who fall victim to snipers and explosives, and who survive, that could mean losing a limb or an organ or their sight. An often unspoken injury is the loss of genitalia. The wars in Iraq and Afghanistan, where roadside bombs are a constant threat, have left more than 1,300 American soldiers mangled in this way. But a team of doctors and scientists at Johns Hopkins Medicine is now ready to help—by performing the first penis transplant in the U.S. (Similar but less extensive procedures have been carried out in China on patients who lost parts of their penises in accidents and in South Africa to repair botched circumcisions).

There isn’t just one reason why penis transplants have taken so long to come about in the U.S. Part of it is probably that the transplant is still experimental–the patient in China had to get the procedure reversed after his body rejected the transplant. To many in the medical establishment, that’s an unnecessary risk for patients who have already undergone so much physical trauma—a patient’s life isn’t in danger if he doesn’t get a penis, as he would be if he needed a new liver or a kidney. Many doctors think restoring genitalia is medically (and ethically) wrong, that it’s not worth compromising the patient’s immune system for the rest of his life.

Arthur Burnett, a urologist and director of the sexual medicine fellowship program at Johns Hopkins Medicine who is on the surgical team, and his colleagues, disagree. “We argue that these portions of people’s bodies need to be considered in a different light,” he says. “Many of these guys are 25 and their genitalia is gone. They just want to be whole again.”

Any day now, the Johns Hopkins team is prepared to implant a donor penis on a young soldier who lost his penis in an Afghan bomb explosion. What they’re waiting for is a donor, or specifically for the family of a newly deceased man (who has volunteered for organ donation) to approve the unorthodox procedure. Unlike other organ donations—which are meant to save lives—penis transplants are considered cosmetic and therefore optional. The donor, in addition to the usual transplant requirements like matching blood type, must also possess the same skin tone, and have been within five or 10 years of age of the recipient. Only then can the surgery proceed.

How will it work?

First, to be eligible for a transplant, a wounded solider must have intact pelvic bones—”Like a foundation for a house,” Burnett says. The first recipient meets this requirement, as do 60 other wounded veterans whom Johns Hopkins has approved for the surgery. None of them are eligible for reconstructive surgery in which the penis is rebuilt from tissue taken from elsewhere in the body, often from their forearms–they’ve lost too much tissue from the penis for doctors to rebuild it.

Once a donor is found, doctors have just a few hours to remove the man’s penis and pelvic muscles (matching the size of the wounded soldier’s pelvic area) and quickly transport it to the operating room. Burnett and a team of over 20 medical professionals will have already prepped the soldier, cutting away skin, scar and muscle and exposing dozens of blood vessels, nerves and the urethra, through which urine and semen flow. As in other organ transplants, surgeons must stitch all these to the donor’s tissues, but a penis transplant is more technically complex because the connections are so numerous and tiny. The procedure, according to one of the Johns Hopkins surgeons, will take about 12 hours.

Here are all the blood vessels, nerves, and tissues that need to be connected during a penis transplant.

Each of the 60 penis transplants that the hospital plans to perform will be unique, depending on the patient’s injury and his anatomy. Surgeons must remove the right amount of tissue from the donor’s abdomen to fill in what the recipient lacks. Testicles cannot be re-attached or fabricated. If an injured vet is missing testicles, he might need hormone replacement therapy to replace the testosterone they typically secrete. Further, the patient’s body might reject the transplant. To minimize that risk, he will receive an infusion of the donor’s bone marrow and will take immunosuppressants for the rest of his life.

Even then, there’s no guarantee the penis will be fully functional, especially when it comes to sex. “We hope we can reconstitute things in a way where men can get a true erection,” Burnett says. “But we might find that we’ve put everything back together and they might still not be getting quality erections. That may require some assistance, like Viagra, or some guys might have to come back to receive a penile prosthetic.” A penile prosthetic is an inflatable synthetic device surgically implanted in the chambers of the penis. A man with the implant can pump in fluid whenever he wants an erection. Burnett performs 80 of these implants every year in men who suffer erectile dysfunction.

What about the emotional impact?

Aside from the medical challenges, the psychological after effects of a penis transplant can be difficult. “We have to make sure that patients are ready to move forward, that they’re counseled well, that the patient is prepared to have his body reconstructed,” Burnett says. “It’s a change that might be hard for a patient or a spouse to accept sometimes. They’re having intercourse with another man’s penis, if you think about it.” To counter this, patients will need, and are required to undergo, psychological counseling before and after the surgery.

While the medical establishment seems to be reluctant to advocate for these procedures, the public tends to be understanding of these needs, Burnett has found. These men want to be fathers, to be intimate with their significant others. This operation can make that happen. If anything, their desire for the transplant is a testament to how much a human will do to feel normal again.

Burnett does not know if the donor for his first transplant will turn up in a few days or a few months. But his surgical team is ready–they’ve performed mock procedures on cadavers, Burnett says, and have done dry runs and rehearsals. “It could conceivably be very successful,” he says. He hopes that one day others in his field acknowledge the importance of this surgery, and that all 60 veterans who have signed up will get their transplants as soon as possible.

“Hopefully we’re going to move forward,” Burnett says. “I hope that, with this communication, even medical professionals will accept that this is something that’s meaningful to patients.”

Clarification (3/8/2016, 10:00 a.m.): An earlier version of this piece incorrectly referred to penis transplants as implants, and stated that the inflatable synthetic device fills with air, not fluid. These errors have been corrected.