Football on turf is hard on the knees

The artificial grass may slightly increase your risk of common sports injuries. 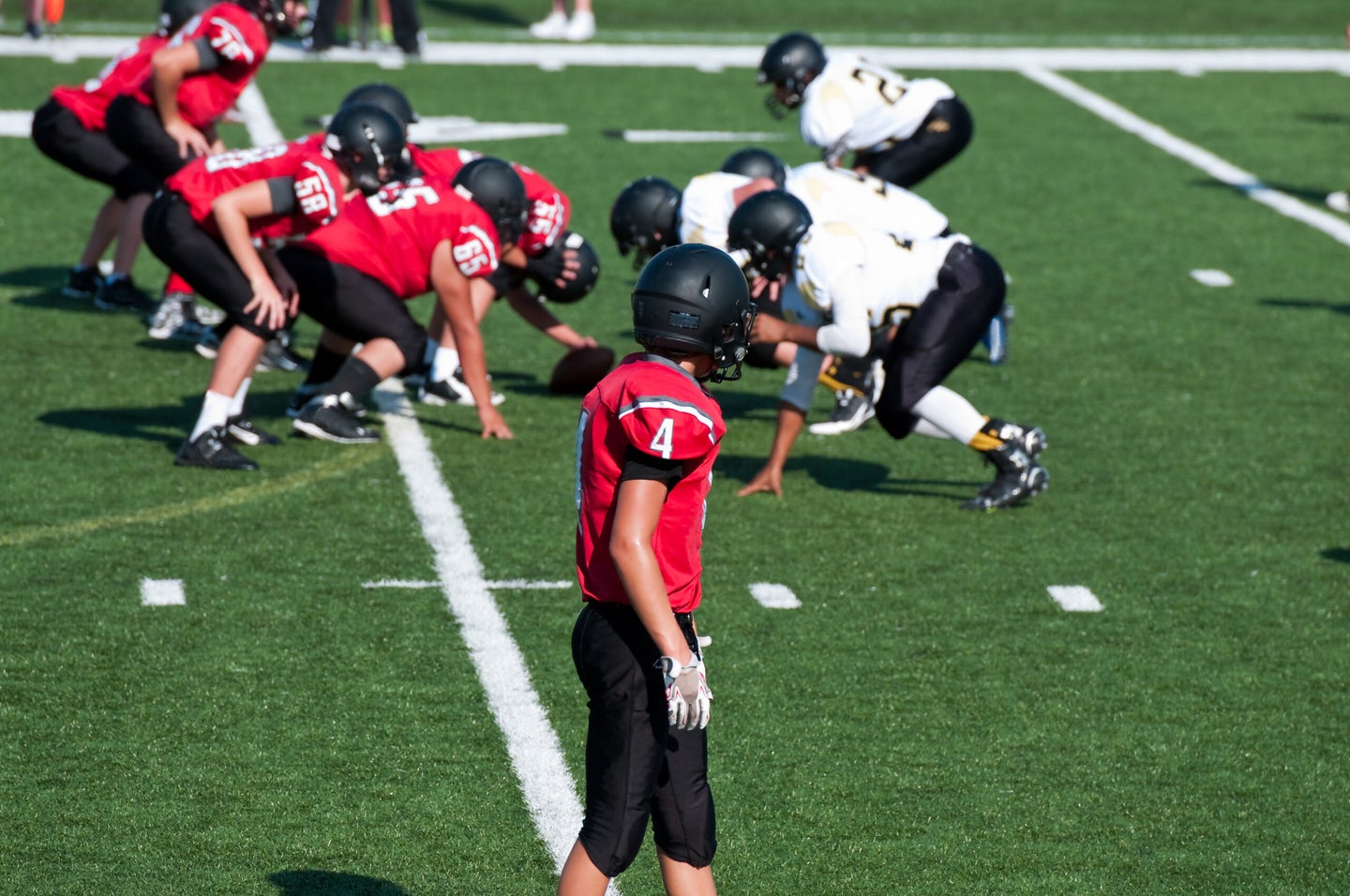 Shacking tiny rubber pellets out of cleats, hair and, occasionally, teeth, is a familiar activity to any athlete who has played on an artificial turf field. The synthetic pellets fill the spaces between long, plastic-y fibers meant to replace grass. The playing surfaces are increasingly common in high school, college, and professional sports—they’re easier to maintain than grass fields, and are weather resistant. However, athletes in some sports prefer playing on grass, and turf can cause subtle but important changes to a game.

Although the research has been mixed, concern also remains that playing on turf might pose a slightly greater injury risk than playing on grass. A new analysis published in The American Journal of Sports Medicine, for example, found that playing football on turf may lead to more posterior cruciate ligament (PCL) injuries than playing the same game on grass.

“Turf does seem to be associated with increased injuries in the lower extremity,” says lead author Galvin Loughran, a medical student at Georgetown University School of Medicine.

The study leveraged 10 years of data on college football injuries from the NCAA Injury Surveillance System, which collects information from Division I, II, and III athletic programs. That data set included over 3 million athlete exposures—times when an athlete participated in a practice or game—and 2,460 knee injuries. Playing on turf made an athlete nearly three times more likely to suffer a PCL injury, across all three divisions. Division II and III athletes were around one and a half times more likely to suffer an ACL injury on turf, but Division I athletes had no increased risk of ACL injury. The analysis showed that there was no increased risk of medial collateral ligament, medial meniscal, or lateral meniscal injuries (other common sports injuries) from turf.

Most previous studies on turf and injury risk have looked at Division I athletes only. “We also looked at other injuries besides ACL injuries, which is the one that’s typically looked at,” Loughran says.

Loughran also noted that the analysis wasn’t able to differentiate between the types of turf the injuries occurred on, and that modern, new generation turf fields are very different from old school AstroTurf. “We don’t know whether specific turf types affect injury risk,” he says.

While the study was well conducted and made use of a robust data set, Jay Williams, a professor in the department of human nutrition, foods, and exercise at Virginia Tech, says he does not think the analysis shows that turf is an injury concern. “Looking at their data, I’m not quite that convinced it’s as big of an issue,” says Williams, who’s studied turf and injury risk in soccer. “Most of the evidence in a gray area. I don’t see a huge red flag.”

Williams noted that while turf had a statistically significant impact on ACL injury risk, it wasn’t actually a particularly large one. In addition, he says, the overall risk of PCL injuries is fairly low—so an increased risk isn’t all that concerning. In the NCAA data set, PCL injuries were the lowest, with only 116 reported, compared with 1389 MCL tears.

“The results in the different studies are little on both sides of the issue. I think when you take them as a whole, this new study fits nicely,” Williams says. “It’s a concern, and it needs to continue to be looked at. I wouldn’t discourage a team from installing artificial turf on basis of injuries.”

Because the findings from research on turf and injury risk are still in a grey area—with small effects that tilt back and forth between studies, and vary based on conditions—there will always be good arguments on both sides, he says. “I could be justified in saying it’s not a risk that would raise concerns. I think you could also be justified in saying any risk is a concern.”

For his part, Williams would prefer to focus on other, modifiable aspects that can reduce injuries in athletes. “There are other factors that we can spend more time trying to minimize,” Williams says. “Like strength, balance, fatigue, agility—those are probably more important in terms of lowering injury risk.”