Does Teeth Whitening Work? And Is It Safe?

Everything you need to know before taking the whitening plunge 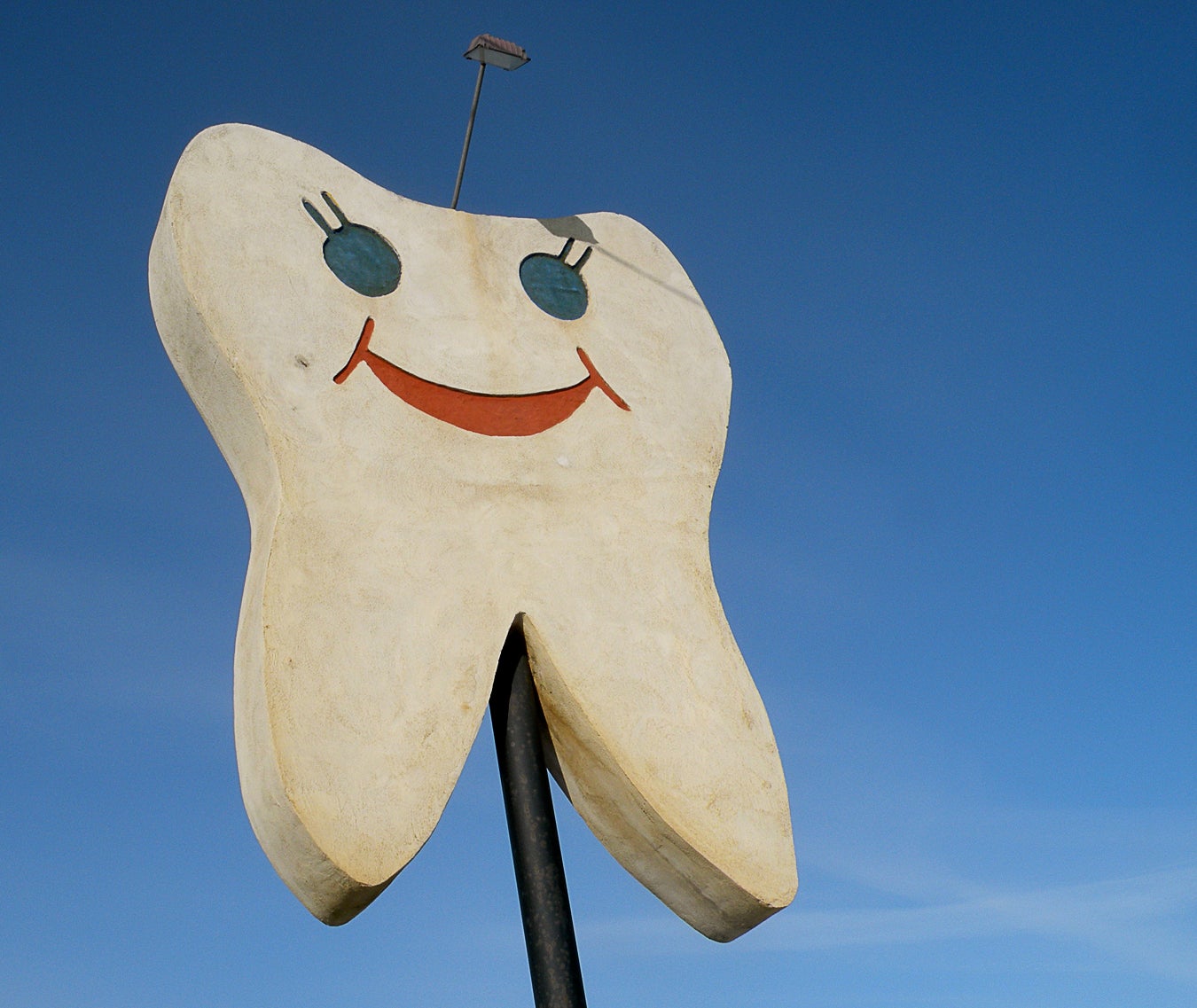 The new year is upon us. That means resolution time. Millions of people will dive into the anxifying world of self-improvement—through diet, exercise and whatnot. One thing that’s sure to be flying off drug store shelves: teeth whitening treatments.

Bleaching and scrubbing our pearly whites (so they become pearlier and whiter), has become an $11 billion-plus national obsession. Some of these off-the-shelf products, and even dental office procedures, have downsides. Before you beautify those canines, here are a few things to consider.

Teeth whitening has been cultural compulsion going back to the Egyptians, who mixed wine vinegar with crushed pumice to polish their smiles. Even worse were the early Romans. (Skip this next part if you’re squeamish): They used urine to whiten their teeth; it turns out the ammonia contained in our wastewater excretions acts as a bleach. Good to know. Thankfully, today’s treatments are not so unsavory. Consumers have access to dozens of abrasives, bleaches, and lasers that will brighten their smiles without giving them ye olde urine breath.

How many of us shine our grills? In a 2013 U.S. survey, 89 percent of orthodontists said patients had asked them to whiten their teeth. Then there are all the over-the-counter kits that made up an $11 billion dollar market in 2013, a market that is expected to grow another $44 million by 2019.

So how good is this stuff for your teeth?

That depends on the treatment—and your teeth. Genetics, hygiene, and past dental work can all play a part. Whitening, for example, doesn’t work on crowns or veneers. There are some potential short term side effects, like tooth sensitivity. And longterm effects are still TBD. But on the whole, dentists say it works as long as you don’t get carried away. Keep in mind that everyone’s teeth are different, and the effectiveness and side effects will vary person to person.

Teeth color with age. The tooth’s interior, known as the dentin, yellows, and the enamel (the protective outer layer) thins from a lifetime of brushing. Lifestyle choices, from drinking coffee and red wine to smoking and taking certain medications, such as tetracycline, can further discolor your teeth.

Whitening works in one of two ways. It either removes surface stains from the enamel or it changes the color of the dentin.

Whitening toothpastes use abrasives to scrub away surface stains. Because toothpaste works only on superficial stains, (as opposed to the inner dentin, where most discoloration actually occurs) the visible effect is pretty minimal. It’s usually no more than one shade lighter on the 16-point tooth shade scale and lasts as long as you keep it up.

If you do go this route, though, make sure you use an approved toothpaste so you’re not causing damage to the enamel. The list of toothpastes approved by the American Dental Association for safety and effectiveness includes six kinds from Colgate, five from Crest, and two from Tom’s of Maine.

To actually change the color of the dentin requires bleaching. This has a more dramatic effect, making teeth three to eight shades whiter. And the color lasts about two or three years. 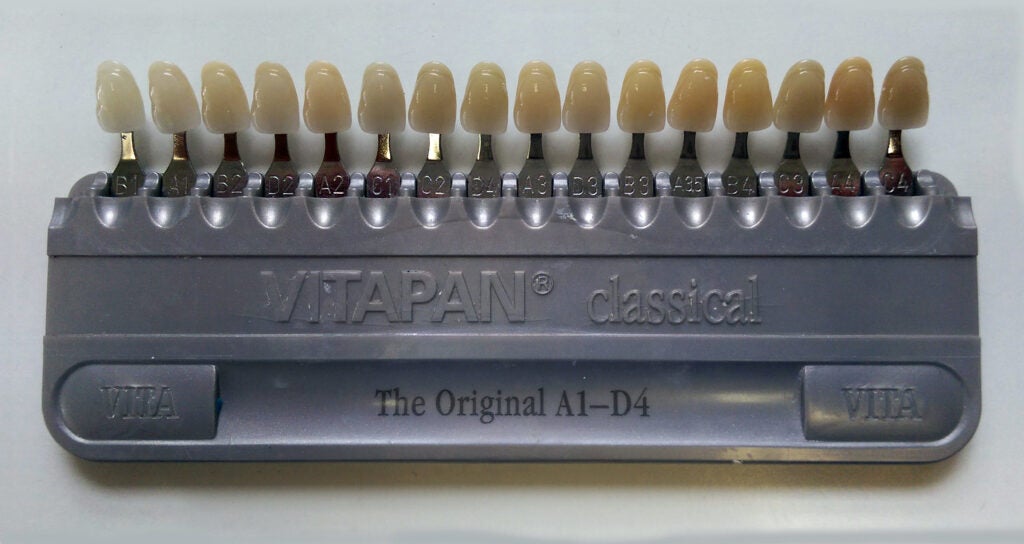 What color are your teeth?

Generally, bleach-based whiteners contain either hydrogen peroxide or carbamide peroxide (which reacts with water to form hydrogen peroxide). When these chemicals break down, they release oxygen into the enamel on the teeth, which lightens the color.

For professional bleaching, dentists tend to use high concentrations of hydrogen peroxide, between 25 and 40 percent. This stuff can burn your gums, so the dentist will cover your gums with a rubber dam to protect them during treatment. This method is sometimes used in combination with a light or laser, though there’s no proof that this makes the treatment more effective.

At-home treatments come in the form of trays, gels, and adhesive strips. These methods use lower concentrations of the same chemicals, usually 5 to 15 percent hydrogen peroxide, which makes them safer.

Both methods have proved effective when used as directed.

A third method, popular among the lazy set, is a little weirder. Some people actually use whitening chewing gum and paint-on whitener, but neither seems to work. It can make you feel better about sticking to your New Year’s resolution, though. Same goes for DIY treatments such as strawberry and baking soda. They don’t seem to work, but they make you feel like you’re taking action.

You could, of course, concoct your own at-home whitening elixir, using diluted hydrogen peroxide. But the trick is getting the liquid to stay on your teeth for long enough (30 to 60 minutes) without coming into contact with your gums during that time. This is why the trays and strips are so handy, and so popular.

Like everything, moderation is key. People have been known to become so obsessed with their whitening results, that they use the kits far too often. The condition even has a name: bleachorexia, where people bleach over and over, sometimes as often as weekly, in a quest for ever-whiter teeth. (Not so different than tanorexia, though on the other end of the color spectrum.)

Such intense and repeated bleaching can wear down enamel to dangerous levels. Not only can this make teeth more sensitive, but it can expose more of the dentin, which could, ironically, make the teeth appear yellower. As a rule, don’t use the whitening treatments more often than recommended by your dentist or the instructions on the box.

For the non-obsessives among us, bleaching and these other treatments have very few lasting side-effects. Studies since the late 1980’s have shown that the short-term effects are mild and short-lived: just the occasional sensitive teeth or irritated gums following treatment. No long-term effects have been found in studies yet, but according to a review paper from 2009, more research is needed to be certain. Especially since most of the studies have been paid for by the companies that produce the whiteners.

One problem that arises is when people who use over-the-counter treatments don’t first consult a dentist (who will advise you on the health of your teeth and gums and suggest the proper regime); or they don’t report when something goes wrong. That also means that side effects are probably underreported in the dental literature.

One other thing to keep in mind. These are cosmetic procedures, so don’t confuse white teeth with healthy teeth. You still need to brush and floss (two to three times a day) if you want your teeth to last you a lifetime.

Whatever you do, don’t get your teeth whitened at a mall kiosk, in a spa, or on a cruise ship. Yes, these services exist and seem quite handy. But a number of states have actually passed laws to keep whitening at the dentist’s office. Don’t leave something as important as oral health in the hands of a mall worker.