When it comes to airborne COVID-19 transmission, droplet size matters

But this doesn’t rule out the danger of inhaling tiny particles. 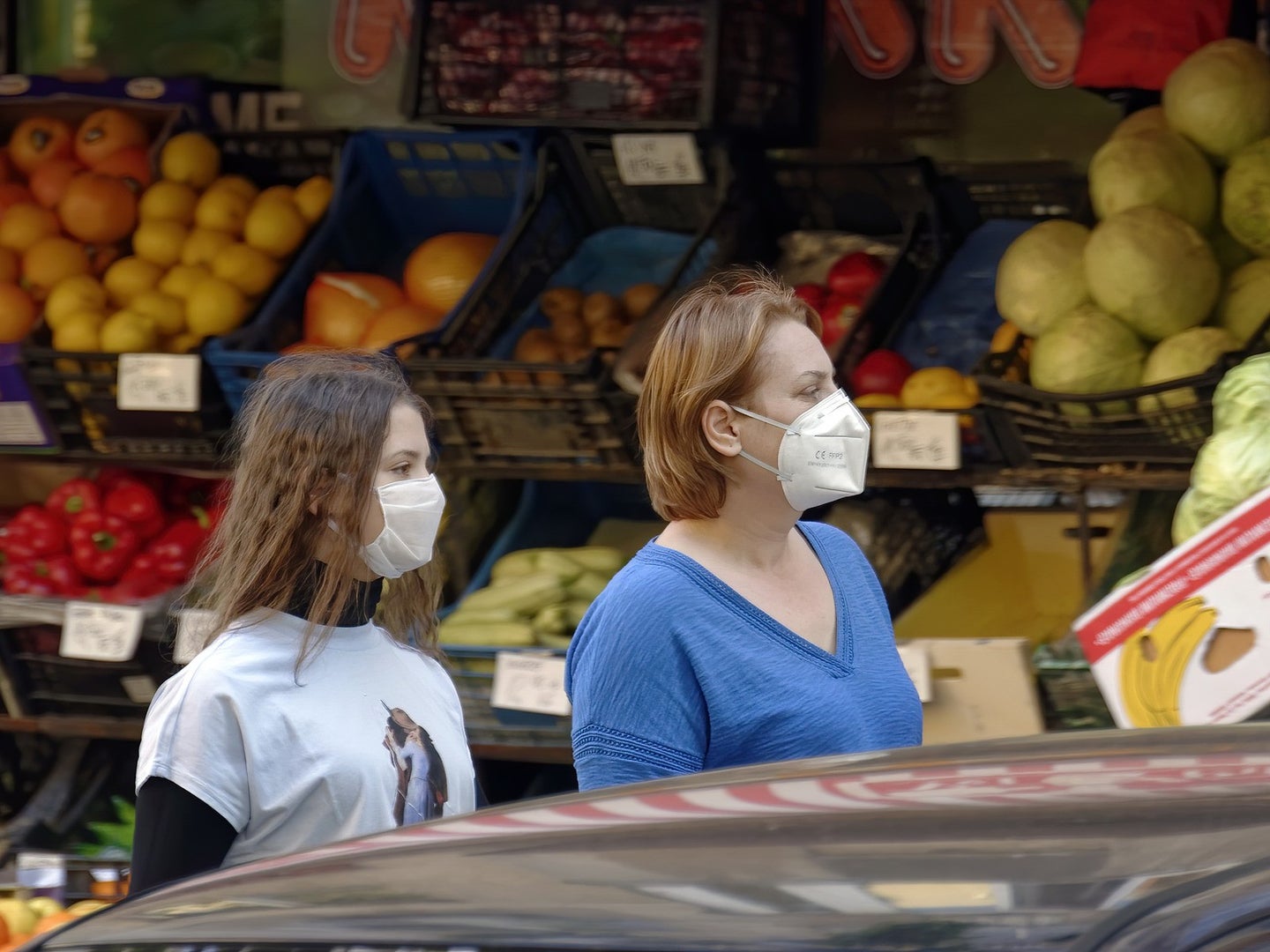 The primary way that people catch COVID-19 is by being in close contact with an infected person. Pixabay
SHARE

Researchers reported last week in the journal Physics of Fluids that tiny particles called aerosols probably don’t spread the virus that causes COVID-19 as effectively as larger droplets that fall quickly to the ground after being exhaled. However, that doesn’t mean this route of transmission should be dismissed.

Since the beginning of the pandemic, scientists have debated the extent to which the smaller droplets transmit COVID-19. “It’s very difficult to quantify this because if somebody gets COVID you never know how that person was infected,” says Daniel Bonn, director of the University of Amsterdam’s Van der Waals-Zeeman Institute for experimental physics, who published the findings on October 27. “What we did is to try and set up a risk analysis to see how likely it is that you can get infected through the aerosol route.”

Bonn and his colleagues measured the amount and volume of large and tiny droplets produced when healthy people spoke and coughed, then used mathematical models to estimate how the aerosols travel through the air and are inhaled. Based on their findings, he says, “It’s a possible and plausible route, but it’s not a very efficient route, probably.”

The new research provides evidence to suggest that airborne transmission is “improbable but can happen,” says Phillip Clapp, a researcher at the Mucociliary Clearance and Aerosol Research Laboratory in the University of North Carolina at Chapel Hill Center for Environmental Medicine, Asthma, and Lung Biology. “What this shows…is that aerosol transmission of COVID is probably not the predominant mechanism of transmission, but that doesn’t mean that we shouldn’t be concerned about it.”

The primary way that people catch COVID-19 is by being in close contact with an infected person, according to the Centers for Disease Control and Prevention and the World Health Organization. The respiratory droplets that carry the virus—which are produced when people breathe, speak, sing, sneeze, or cough—vary in size. In tiny aerosols, the liquid evaporates quickly, leaving behind a residue that is light enough to remain suspended in the air and reach people more than two meters (about 6 feet) away.

“That is what poses the threat, because if you’re in the room with a person who produces these aerosols and who is infected, you’re breathing all these aerosols for a long time,” Bonn says. This airborne transmission is a key route through which measles spreads; the virus can linger in the air for up to two hours after an infected person has left the room, making it extraordinarily contagious.

Throughout the pandemic, explosive outbreaks known as super-spreading events have raised concerns that the novel coronavirus can also spread this way. In one recent example, more than 30 people connected to the Rose Garden ceremony President Donald Trump held for Judge Amy Coney Barrett’s nomination to the Supreme Court tested positive for the virus. In February and March, a cluster of more than 5,000 cases was linked to a church in South Korea.

Although initially slow to acknowledge the role of airborne transmission, the WHO and CDC have updated their guidance in recent months to reflect that the novel coronavirus can spread this way, particularly in poorly-ventilated spaces. One cause for confusion has been that droplet size is a spectrum, Clapp says. “We’re talking about terms that aren’t really concrete,” he says. “There’s no agreed-upon cutoff for size that I’m aware of that says, this is what constitutes a large droplet aerosol, and this is what constitutes a small one.”

Bonn and his colleagues considered aerosols to be roughly 100 times smaller in diameter than droplets. “If you…assume that the concentration in the saliva is constant, that means that there’s a million times more virus particles in these large droplets than in the small droplets per droplet,” Bonn says. The researchers asked seven volunteers to cough and speak into laser beams so they could measure the amounts of aerosols and large droplets they produced.

“We find that if somebody speaks, he or she only produces aerosols, but if you cough you also produce these large droplets,” Bonn says. “They are so heavy that they fall onto the ground within a couple of feet from the person that coughs.” About 98 percent of the spray produced when a person coughed fell into the large droplet range.

Next, the researchers used a jet nozzle to spray ethanol droplets into a chamber eight cubic meters in size and used lasers to track how they moved through space. The ethanol quickly evaporated to leave behind aerosols similar to those produced by coughing or speaking.

The researchers then calculated what would happen in a situation where a person entered a small, unventilated space such as a restroom after an infected person coughed. “What we model is how many aerosol particles do you inhale, and how many virus particles are in the aerosol droplet, and so what is your probability of becoming ill,” Bonn says. In these simulations, participants were all unmasked, and Clapp says that a face covering would likely “greatly reduce the number of small particles in the air and drop the relative risk.”

He and his team found that it would be relatively safe to spend less than 12 minutes in the room after an infected person had coughed once, particularly if that person was not a “high emitter,” or potential super-spreader, which the researchers defined as someone who produced 17 times more liquid volume than others in the study did. However, Bonn says, if the infected person had been coughing repeatedly or speaking, more aerosols would build up. “You’d need to stay for two or three minutes and then you have a very high probability of being infected,” he says. “But it all depends on the room size and the amount of coughing that the COVID patient did, etcetera; it’s difficult to give exact numbers for unknown circumstances.”

The researchers observed that a person’s chances of becoming infected were highest if they entered a room right after a high emitter coughed. “We have kind of had that intuition for some time, but this has put a numerical refinement to it,” Clapp says. “Now we can look at these data, and look at this model, and kind of get some understanding of what that means in terms of a relative risk.”

Bonn and his colleagues caution that the findings should not be interpreted too literally. “Importantly, our results do not completely rule out aerosol transmission,” the researchers wrote. “What is acceptable as an infection probability is beyond the scope of this paper.”

One limitation of the research is that it’s not known how many virus particles a person needs to be exposed to before becoming infected with COVID-19. For their calculations, Bonn and his colleagues assumed that this amount is similar to that determined for the coronavirus that caused the SARS epidemic in the early 2000s.

The researchers also only measured secretions produced by healthy people. “My guess is that based on biological responses from the lungs and from the rest of the body that you’re going to see more fluid production…when they’re sick with something like COVID,” Clapp says. “It could [be] that the numbers that they came up with here may change based on a person’s output when they’re actually sick.”

Matthew Meselson, a molecular biologist at Harvard University who was not involved with the research, says that aerosols may actually contain more virus particles than larger droplets because they come from deeper within the lungs. If this is true of the novel coronavirus, the new findings would underestimate the threat of airborne transmission. “It’s very important that one take account of this difference, because the high titer of virus is likely to be down deep in your lungs,” says Meselson, who investigated a 1979 anthrax outbreak in Russia, and concluded that it was primarily fueled by airborne transmission. “What we really need is [more] measurements of the amount of [SARS-Cov-2] RNA in the aerosols that people produce when speaking.”

More research is still needed to determine how risky airborne transmission of COVID-19 is under different circumstances, Bonn says. “Our conclusion is that if you’re in a well-ventilated room in a modern building, for instance, that you don’t need to worry too much about getting aerosol infections, but if you’re in ill-ventilated rooms—small meeting rooms, elevators, public restrooms—you should worry,” he says. “The trouble with the message is that it’s not a yes or a no, it’s not a ‘no, aerosols are not dangerous,’ and it’s also not, ‘yes, the aerosols are very dangerous.’”

While there are some precautions you can take to avoid spending time in stuffy spaces, such as taking the stairs instead of a cramming into an elevator and opening your windows, the new findings underscore the importance of good ventilation. “[This] is probably going to be a key element as we enter the winter and people are moving to indoor spaces,” Clapp says. He and his colleagues have recently begun investigating how effective air purifiers are at removing small particles like aerosols from the air. So far, he says, their preliminary data are encouraging.

Still, Clapp says, the most important precautions against COVID-19 continue to be wearing masks and social distancing. “I can’t emphasize enough that people should continue to wear masks,” he says. “In doing that we limit the number of large and small particles in the air that we’re all sharing.”