Of Pigs and Primates: Addressing the Airborne Ebola Allegation

The Ebola outbreak in West Africa has gained international attention, due in part to the recent declaration of a Public... 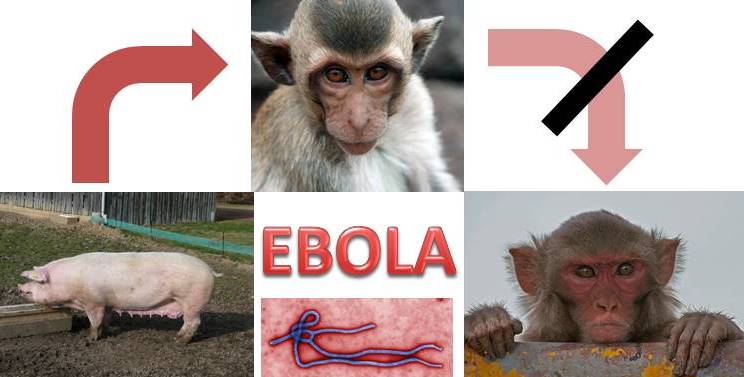 The Ebola outbreak in West Africa has gained international attention, due in part to the recent declaration of a Public Health Emergency of International Concern (PHEIC). In turn, public health officials have been asked to enact stricter infection prevention and control measures to ensure spread is minimized. The guidelines stem from the evidence demonstrating the virus can only be transferred through direct contact with bodily fluids and contaminated surfaces and equipment. But while these are widely accepted routes of transmission, another more problematic option continues to be debated.

Airborne infection is a specific form of spread in which an individual becomes infected while maintaining a distance of over six feet from an sick person. The transfer is based on the physical properties of [aerosols](http://www.aqa.uk.com/docs/published-studies/Factors/ involved in the aerosol transmission of infection and control of ventilation in healthcare premises.pdf), defined as a suspension of particles ranging from 0.001 to 100 micrometers in size. In order for this type of spread to occur, the liquid components of aerosols, known as droplets, must be able to defeat gravity and travel greater than a six foot distance.

The possibility of airborne Ebola infection was first investigated during a 1979 outbreak in South Sudan. The researchers examined the spread of the virus within families and sought to determine if there was any definitive airborne spread. Unfortunately, there was no possible way to prove one way or the other as evidence of close contact precluded any opportunity to identify airborne routes. They concluded transmission through the air may be possible, but highly difficult.

In 1995, during an outbreak in the Democratic Republic of the Congo, the question arose yet again. In this case, surveillance of the cases revealed five patients had contracted the virus without direct contact with an infected individual. This suggested there might be the possibility of aerosol transmission. The possibilty was reinforced by an animal study in the same year in which non-direct contact was observed between monkeys. While they authors could not rule out droplet infection, they suggested the airborne route was a definite possibilty.

The search for a definitive answer continued for years until a Canadian team published a strong case for airborne transmission. In the study, the group took piglets, infected them with the Ebola virus, and placed them into a room containing cages holding four cynomolgus macaques sitting 4.5 feet above the floor. Over the next two weeks, samples were collected from animals, cages and the air in the hopes of finding the virus. Within seven days, the macaques became rather unwell and virus was detected in their bodily fluids. In addition, virus was found to exist both in the cages and in the air.

The results appeared to be conclusive due to several reasons. There was a large separation between the pigs and primates; they could not have had direct contact. There was evidence of virus in the air suggesting the route was airborne. Finally, the macaques became ill with Ebola. It seemed to be a slam dunk.

There was, however, one caveat. Pigs are the most efficient species for generation of short-range, large and small droplets capable of traversing the distance between the floor and the cages. There may have been transmission to the macaques through droplets sent upwards. Though this was unlikely, the team could not definitively say Ebola was spread through the airborne route.

To attain final confirmation, the team needed to conduct one last experiment. Last month, they reported those findings and learned how a caveat can all but cancel out a conclusion. For those in the airborne transmission camp, this was a rather large disappointment.

For this study, the team decided to take the porcine paradox out of the equation. They tested whether the virus could transmit between primates. Sets of two cages were spread across a room with at least 3 feet between them. In one set were infected cynomolgus macaques; in the other were healthy Rhesus macaques. They were kept together for up to 28 days and observed for any signs of transmission. There was, however, none. Not only did the healthy monkeys survive, there was no evidence of any virus transmission in their bodily fluids.

In retrospect, the authors believed the use of pigs gave the airborne argument an unfair advantage. Pigs could produce significantly more virus than primates, suggesting a greater chance for droplet spread. In addition, because of the massive amount of shedding pigs display when sick, there was a greater opportunity for the monkeys to become infected through the respiratory tract. However, this type of spread is droplet, not airborne. There was no other option than to conclude Ebola was simply not an airborne virus.

Although the question of airborne transmission may be put to rest thanks to this study, there are still concerns for anyone coming within a six foot radius of an infected individual to prevent droplet spread. This means ensuring the use of a mask along with gloves, gown and eye protection and adherence to proper disinfection procedures afterwards. Even if not airborne, Ebola is still one of the most dangerous pathogens and we need to be vigilant and resilient to contain outbreaks and keep new ones from starting.