1.7 million-year-old fossil is one of the oldest known cases of cancer in a human ancestor 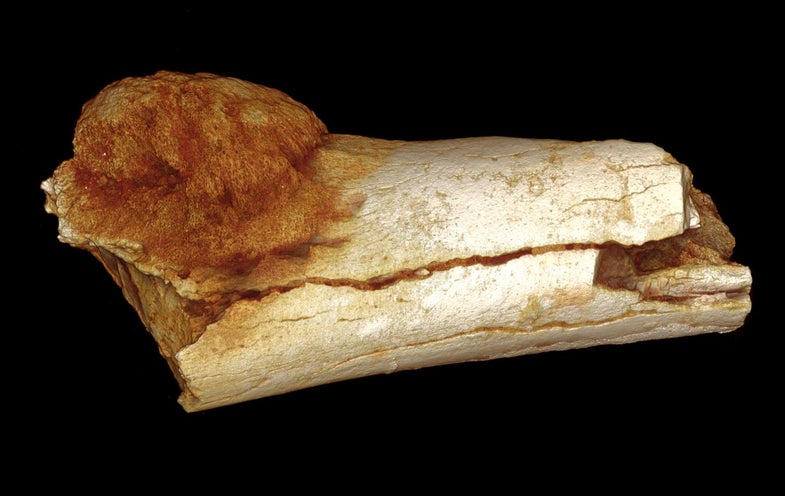 Finally, something to say back to that smug party guest who can’t stop talking about the paleo diet.

A group of researchers from the University of The Witerwatersrand’s Evolutionary Studies Institute and the South African Centre for Excellence in PalaeoSciences published two papers on Thursday detailing a discovery of a foot bone with a large tumor protruding from its surface. Found in South Africa, the bone came from a bipedal human ancestor who lived approximately 1.7 million years ago. Scientists believe this may be one of the oldest pieces of cancer evidence in the human fossil record.

The meddlesome, cancerous lump also presents a counterpoint to supporters of the paleo diet. The paleo diet simulates what our hunter-gatherer ancestors might have eaten before the invention of organized agricultural systems. It focuses on increasing the amount of protein, fiber, potassium, vitamins and healthy fats, while cutting back on carbohydrates and removing all processed sugars and chemicals. The permissible food groups comprise grass-produced meats, seafood, fresh fruits and veggies, eggs, nuts and seeds and healthful oils. However, this healthful eating regimen comes at a high cost to many food lovers. Dairy, potatoes, salt, and cereal grains are just a few of the items paleo dieters aren’t allowed to savor.

This “caveman diet” is supposed to reduce your risk for what creator Loren Cordain ambiguously calls “chronic disease.” The paleo diet’s website is chock full of articles suggesting that the strict food choices can prevent and even fight cancer.

Although one cancerous bone can’t actually prove that the paleo diet doesn’t reduce your risk of cancer, this new evidence adds to the growing pile of challenges against the diet. Unfortunately for Cordain and paleo dieters, cancer’s origins are a lot more complicated than what you eat–there are other components such as your genetics and your environment.

Scientists aren’t sure whether the foot bone belonged to a child or adult, nor if the cancer eventually killed its host.

This isn’t the only ancient cancerous bone to be uncovered. Scientists also unearthed the skeleton of an Australopithecus sediba child, dating back almost 2 million years ago, with a benign neoplasm in its vertebrae. This type of cancer is especially noteworthy in a child; not only is this a rare cancer, but also it’s extremely unusual for it to be found in someone so young.

So go ahead, order that pizza. You only live once.