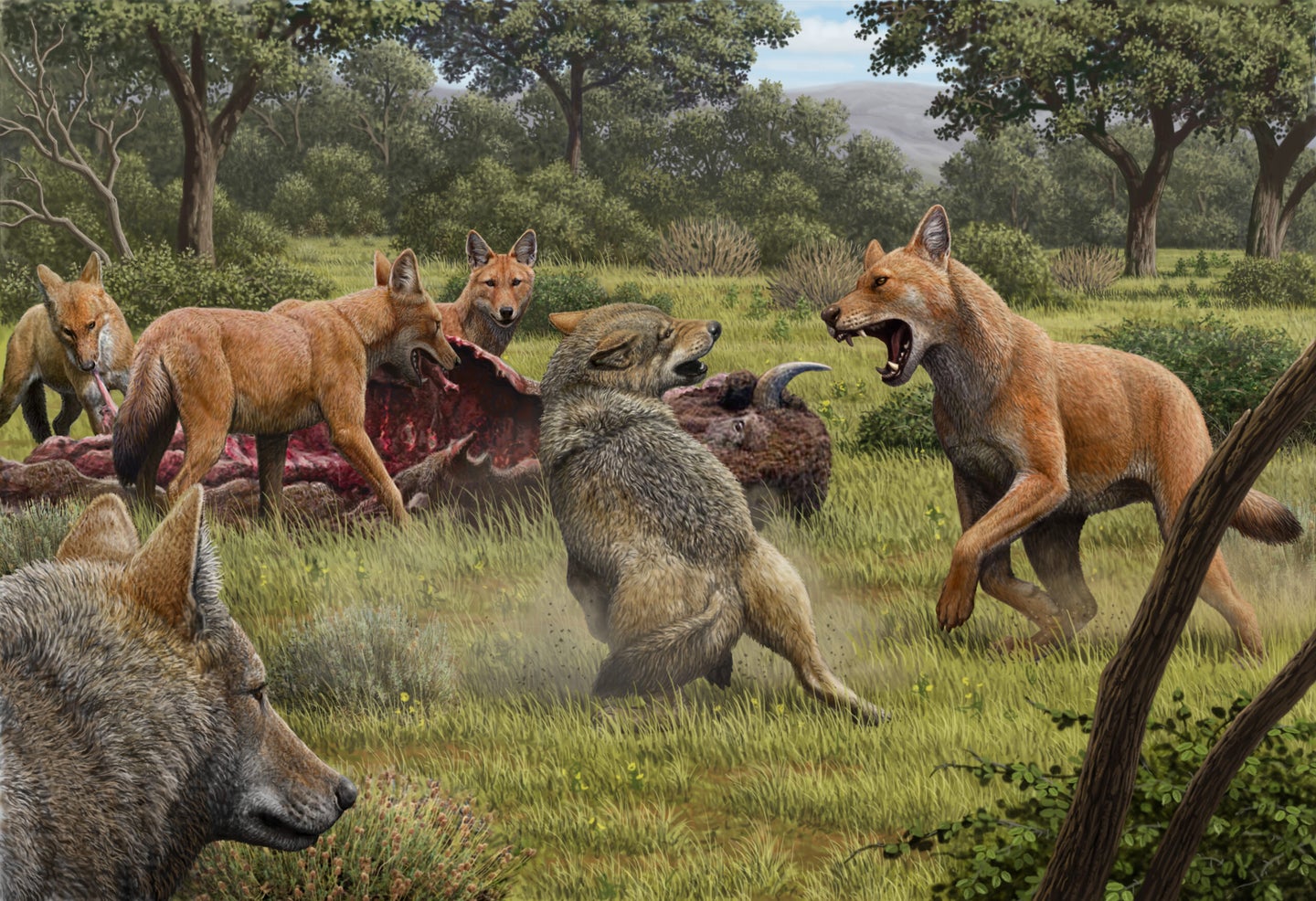 The giant predators weren't closely related to today's canines, even if they look quite a lot alike. MAURICIO ANTÓN
SHARE

When you picture a dire wolf, the image that comes to mind is probably one of those unbelievably fluffy yet terrifying creatures that inhabited Winterfell in Game of Thrones. And you’d hardly be the only one, fans of the show that fell in love with its otherworldly pups started buying up their modern-day “lookalike,” the Siberian husky, to the point where it resulted in sketchy breeding and rising abandonment.

But when they did traipse the world, dire wolves hardly looked like their Westerosi counterparts. The giant canids that once roamed Pleistocene-era North America probably looked more like giant red foxes than mega-sized Malamutes, said Angela Perri, an archaeologist at Durham University. Even more surprisingly (and perhaps disheartening), the wolf-like beast was hardly a wolf at all—the dire wolf genetic line cut off from our modern-day wolves, coyotes, and dogs six million years ago.

Perri and dozens of other geneticists, archeologists, anthropologists, and zoologists from across the world, for the first time, were able to dive into the DNA of this mysterious mega predator in a new study in Nature. And what they found was stranger than fantasy.

Dire wolves were first discovered in the 1850s, and many samples have been preserved in nearly perfect condition thanks to places like the La Brea tar pits in what is now Los Angeles, which are natural pits of asphalt that sucked up the bodies of prehistoric beasts like mammoths, sloths, and American lions while they still walked the earth. The morphology of the canine was so similar to a mega-size gray wolf that nobody thought to argue with what seemed like a sure thing.

“Since that time period, there hasn’t been a lot of shift in what we have thought about dire wolves,” Perri said. “Since their morphology, their skeletons and teeth, look so much like wolves, we just assumed they were closely related to gray wolves.”

As evolution tells us over and over again, something that looks like a certain species doesn’t necessarily mean it’s a family member (looking at you, king crabs). But hunting down the DNA of the mysterious dire wolf is no easy task. In cases like La Brea, the tar can preserve a skeleton beautifully, but mangle the DNA inside from all sorts of creatures sharing the asphalt-filled grave, spreading different biochemical signatures all over the place, said Patty Shipman, a retired anthropologist who specializes in human and canine interactions. She first tried to gather DNA from La Brea’s dire wolves years ago.

“At that point, we said there’s nothing you can get out of this that will tell you anything about dire wolves,” Shipman said.

So Perri and her colleagues spent years hunting down samples of undisrupted DNA from across the continent. “Out of the dozens and dozens of samples, we managed to get five [usable] samples,” she said. And after genetic analysis, not only did the researchers discover how different the dire wolf was from the other dog-like creatures that occupy our current world, but also that they were the last surviving lineage of their kind. That’s right, there’s no dire-dogs or dire-coyotes running around today—they vanished from the earth around 12 or 13 thousand years ago.

This could come from a whole number of reasons, namely the intense climate change that appeared as the world shifted into the Holocene (our current geological epoch), knocking out other mega predators like sabertooth cats and short-faced bears as their megaherbivore food sources also started to retreat. And it probably didn’t help that humans also started showing up, hunting down their already shrinking food sources, said Perri.

Another sticky situation that could have contributed to the dire wolf’s demise is the introduction of more modern-day dire wolf-like species, such as wolves and coyotes, and the diseases they may have brought along with them. The new study found that dire wolves were so evolutionarily different from a gray wolf and other canids that survived the transition out of the ice age that they couldn’t interbreed to make an even heartier stock of dire wolves last into a new age.

“Interbreeding could have helped dire wolves survive enormous ecological changes that were happening at the end of the ice age which drove out almost all of the large animals in the Americas,” said Robert Loseley, a professor of archeology at the University of Alberta who was not involved in the study. “Wolves made it through that. Coyotes made it through that. But the dire wolves didn’t.”

Now that we know how special dire wolves are, it opens a whole new set of questions for scientists, Perri said, like did they interact with early humans, who were their close relatives, and figuring out whether the 160-pound pups had fur like a wintery beast or a massive Shiba Inu.

“If we could say for sure that they are this reddish color, “Perri said, “bringing dire wolves to life would be exciting.”