Life in Los Angeles was brutal for saber-toothed cats 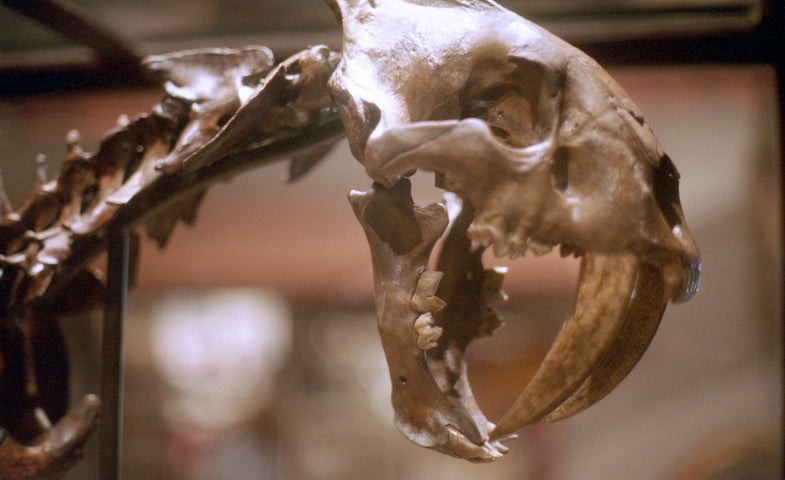 If you were a massive ice-age bison, chowing down on grass on the misty plains of Los Angeles, there’s a good chance that a saber-toothed cat might pounce on you, pin your hooves to the ground, and try to sink its knife-like sabers into your jugular. At that point, you’re probably screwed, but you won’t die without putting up a nasty, thrashing fight.

This is likely why saber-toothed cats were so frequently battered and injured.

Researchers analyzed thousands of saber-toothed cat bones from the La Brea Tar Pits—sludgy oil seeps found in the middle of Los Angeles—and found that the cats frequently injured their spines, likely through violent episodes of twisting and straining. The results, published recently in the journal Nature Ecology and Evolution, suggest that these murderous cats—although equipped with six-inch sabers—still couldn’t kill with ease.

“They were struggling with their prey, and digging in with their claws so they could bite the neck or underbelly,” says Christopher A. Shaw, a research associate at the La Brea Tar Pits who for three decades has helped identify trauma on the cat bones. “You see occasional injuries in modern large cats, but the frequency in saber-toothed cats is huge.”

Over decades, Los Angeles scientists pulled thousands of bones out of pits 61 and 67, which preserved tar-stained fossils from around 340 cats. This vast collection allowed the study’s scientists to examine a wide map of cat bones, from skulls to tails. Researchers found that the traumas, which included healed fractures and severe muscle strains, appeared in obvious “hotspots” on the cats’ skeletons, clustered on their shoulders and backbones. The most notably tortured area was the lumbar spine. A specific vertebrae here, the lumbar 1, showed trauma in half of the bones observed.

After an afternoon of trying to hold down a furiously kicking beast, it’s little surprise that these cats left the crimson scene with torqued backs.

“I feel like they would wake up and be a little stiff,” say Caitlin Brown, the study’s lead author and doctoral student in ecology and evolutionary biology at UCLA.

And it wasn’t as if saber-toothed cats had easy pickings for prey. Today, Los Angeles may be brimming with cars, but 12,000 years ago, it was packed with predators.

“They were not the top cat,” says Brown, who noted that saber-toothed cats shared the land with fast bears, jaguars, and American lions. “Their life would be pretty tough. They were competing with lots of predators.”

Although the cats’ intimidating canines might make the animals appear indomitable, this really wasn’t the case. “It’s actually not easy being a carnivore at all,” says Shaw. “The animals that they’re trying to eat don’t cooperate. They don’t say ‘here’s my throat.’ ”

While frequent back injuries portray a rough life for these predators, the traumas didn’t kill the La Brea cats. The tar did.

Oil seeps out of the ground in central Los Angeles, collecting in pool and holes (it’s technically the lowest grade of crude oil—but it’s popularly called tar). In these pits, there are a whopping nine times as many predators pulled out of the tar than prey. This is bizarre, because herbivores—often dim-witted creatures traveling in big herds—greatly outnumber predators.

But at the tar pits, predators like saber-toothed cats and dire wolves were likely drawn to meaty animals that had taken a fateful misstep into the sticky, black pitch—and there are few things that excite a bloodthirsty predator more than an immobilized meal. So as the cats and wolves pounced, they too must have become mired in the tar. In a Pleistocene tragedy, predator and prey died together.

Out of the same pit that researchers collected the saber-toothed cat bones, thousands of dire wolf fossils—who are clearly not mythological animals—were also gathered over the years. This allowed Brown and her team to compare the total number of wolf and cat bones that sustained injury to bones that were trauma free. The results showed that saber-toothed cats were more likely to get injured on the job than wolves. Cat bones showed signs of trauma 4.3 percent of the time, while wolf bones just 2.8 percent of the time.

Whereas the cats received trauma to their backs, the wolves sustained most of their injuries to their heads and necks, which makes sense because canines use their mouths to capture their prey, leaving their heads more susceptible to injury.

In pre-historic Los Angeles, then, the stocky, sabered cats were even more prone to injury than biting wolves that got kicked in the face. Additionally, there was fierce completion from lions and bears, not to mention the sticky, suffocating tar.

It makes one wonder if the cats would have preferred Los Angeles today. It’s sunny most days of the year, although most Los Angelinos agree that traffic on the 101, 405, and 10 freeways can be intimidating.

“They probably would have been terrified and ran off,” says Shaw. “But who knows, they might have thought human beings were delicious.”