You have a lot more in common with an orangutan, but scientists can still track how closely you’re related to fruit flies and cucumbers. 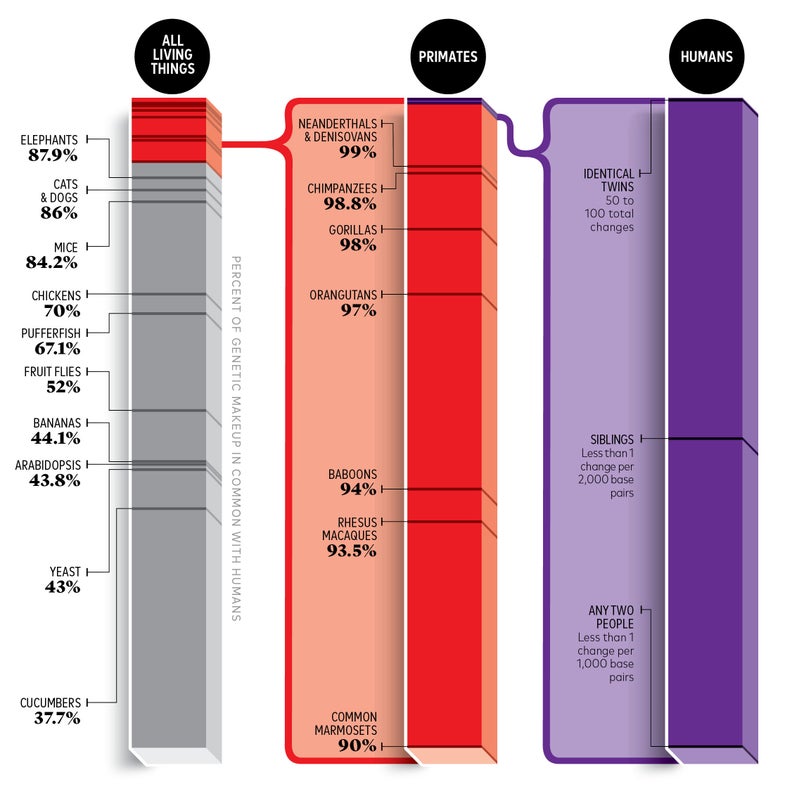 A’s, T’s, G’s, and C’s are all it takes to make you, me, or a banana. Unique strings of these molecules, matched up in units called base pairs, form doubled DNA helixes, which serve as the recipes for all living things. Because the challenges of life—such as absorbing nutrients, replicating, and moving—are fairly consistent across organisms, there’s plenty of overlap between sequences. Here’s a sampling.

To compare across distant species—whose codes diverge too greatly to lay side by side—scientists look for overlaps in the molecules DNA produces, such as proteins. Both fruit flies and humans, for instance, rely on the Wnt family of proteins to establish the back and belly of the embryo.

Analyzing DNA line by line works fine within the same phylogenetic family, where crossover is more common. It takes just a 6 percent divergence in our genetic code to get from humans to our distant, red-butted cousin, the baboon, despite millennia of evolving separately from one another.

Though any two humans differ by only approximately one alteration per 1,000 base pairs, those changes add up across the genome, which contains 3 billion pairs in total. It takes only a few small tweaks in the MC1R gene, for instance, to increase pheomelanin production and give a child fiery red hair.