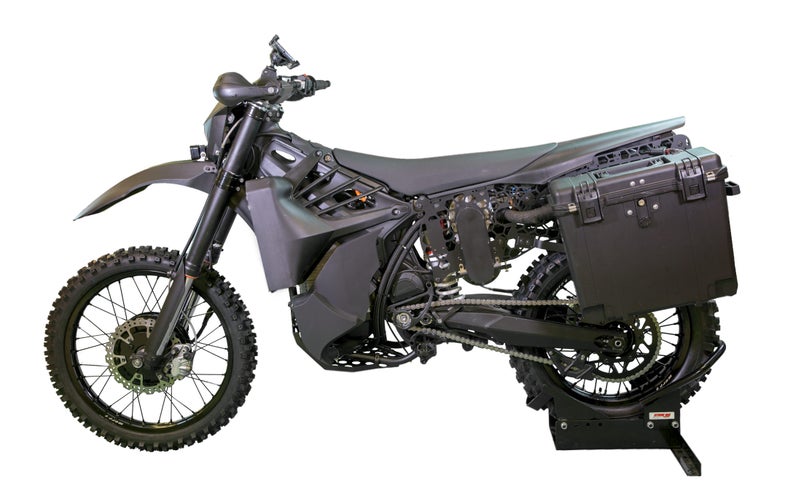 A dirt bike is a tool for getting a person to a place they shouldn’t be. Lightweight, made for rough terrain, and fast, motorcycles allow special forces to slip through woods, navigate narrow canyons, sneak through alleyways, or hurtle down footpaths. There’s only one problem: dirt bikes are really, really loud, so any secrecy gained by using a bike is lost to the engine’s roar. Which is why DARPA, the Pentagon’s future projects wing, is funding the development of a versatile electric dirt bike, so that special forces can have as silent a ride as possible on two powered wheels. The bike is called “SilentHawk,” and after receiving the first prototype, DARPA liked to so much they asked for two more.

SilentHawk is a collaboration between Logos Technologies, which makes military tools like drones and sensors, and Alta Motors, which makes electric dirt bikes. Creating a silent motorcycle meant starting from an electric bike. As designed, one modification of the SilentHawk uses a hybrid engine, so it can run on gas most of the time, and on electricity when it needs to be quiet. And it’s not limited to gas: It’s can run on diesel, as well as JP5 and JP8 jet fuels, so that the special forces using it in the field can power it with whatever fuel they might encounter. When running on fuel, the SilentHawk recharges its own batteries and any electronic devices the troops might have, like radios, GPS receivers, or tablets. 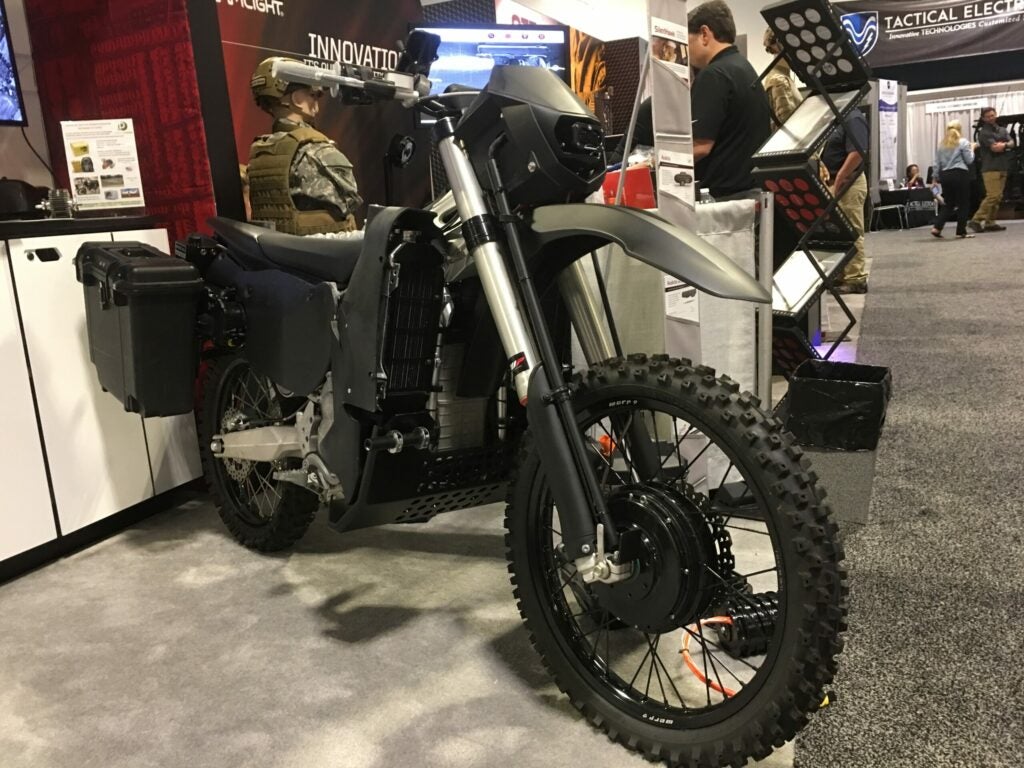 The SilentHawk motorcycle has an expected top speed of 80 mph, on either electric or hybrid power.

“Because they’re motorcycles and they’re relatively small, you can put several of these in the back of a V-22 and they could be dropped off somewhere,” said Doug Rombough, VP of Business Development for Logos Technologies. “They could go 50 miles, and when they get within 10 miles of an objective, they could shut off that multi-fuel engine, and go all-electric—the only noise [they] will produce at that point will be the noise of the tires on the surface and or the chain of the motorcycle.”

Running on fuel with the generator activated, the bike is about 75 decibels, or the sound of a garbage disposal. Switched to all-electric, SilentHawk lead engineer Alex Dzwill says it produces less than 55 decibels, or about the sound of normal conversation. Is it possible to make it quieter?

“Literally the loudest thing is the chain, and it’s possible for us to outfit a belt, though there’s a whole host of reasons for why you wouldn’t want a belt on a dirt bike,” said Dzwill. “If you get a rock in there, it’s very likely that you’ll rip the belt up, but if you’re in a sandy location like the desert, it’s possible you could use a belt and be fine.”

So 55 decibels may be as quiet as a dirt bike gets. Competition dirt bikes are regulated to stay under 113 decibels, so compared to the roaring engines that normally come with such vehicles, the SilentHawk represents a world of improvement. 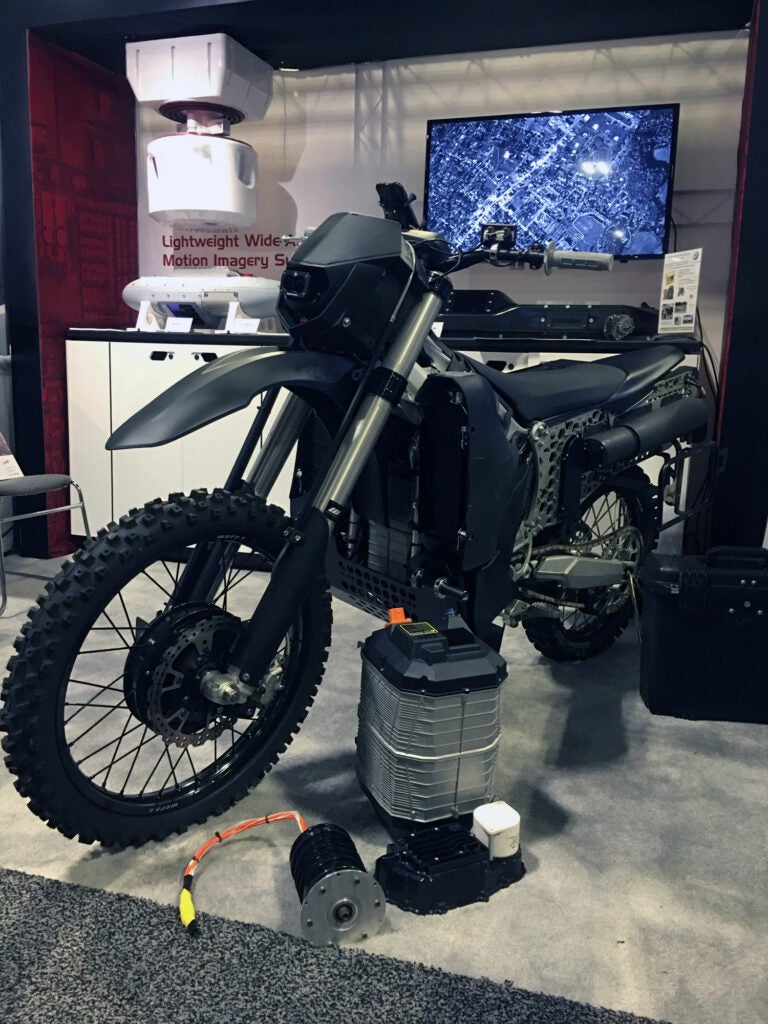 The bike is so quiet it even surprised its designer. Dzwill recalls a testing session in the woods where a rider was able to sneak up on him undetected. “He just popped up behind us, like the sound of us walking was enough to completely hide the sound of the motorcycle approaching behind us.” As a comparison, they were able to hear a traditional gas-powered dirtbike from almost a mile away.

There are no other stealth features for the SilentHawk other than its quiet engine, but that’s still probably enough for the silent professionals that may take it into battle. Traveling undetected is a tremendous advantage, provided the bike itself doesn’t end up a encumbrance. Which nods to one of DARPA’s goals in asking for new prototypes: reducing the weight, while retaining all the added functionality.

Off the shelf, an Alta Motors electric motorcycle weighs 270 pounds. With everything added to the first prototype, including two-wheel drive, the hybrid engine, and the control system, the total weight is 350 pounds. To get that heft back down, Logos is going to need to rework part of the hybrid engine. Originally built for the Parahawk unmanned aerial vehicle program, the engine is liquid-cooled. A new air-cooled engine could do-away with the radiator and shed pounds in the process.

And to provide flexibility as well as lightening the load of the bike, SilentHawk is somewhat modular. One kit will provide auxiliary power, a user interface, and equipment storage. Another one will extend the range of the bike. Both kits can work with the hybrid engine, and the seat with generator attached can be swapped out for a standard seat. (The generator can work even if the bike isn’t moving, too). The end goal is something flexible for lots of needs, which can be adapted in the field.

“You can transfer a hybrid power motorcycle back to an all-electric motorcycle, in about 30 minutes, maybe an hour if you’re not experienced at doing it,” said Rombough, “You could leave that in the environment, go back and forth if you want a slightly more nimble motorcycle for your upcoming mission.”

The soon-to-be-signed follow-on contract with DARPA will produce these new prototypes within a year. If DARPA likes what it sees, the next stage would be more of a production model, and then after that it’s possible special forces could get a brand-new bike for moving undetected wherever they may need to go. Just don’t expect them to make a big noise about it.