We now know that it stayed aloft for at least 24 hours in a flight last year. 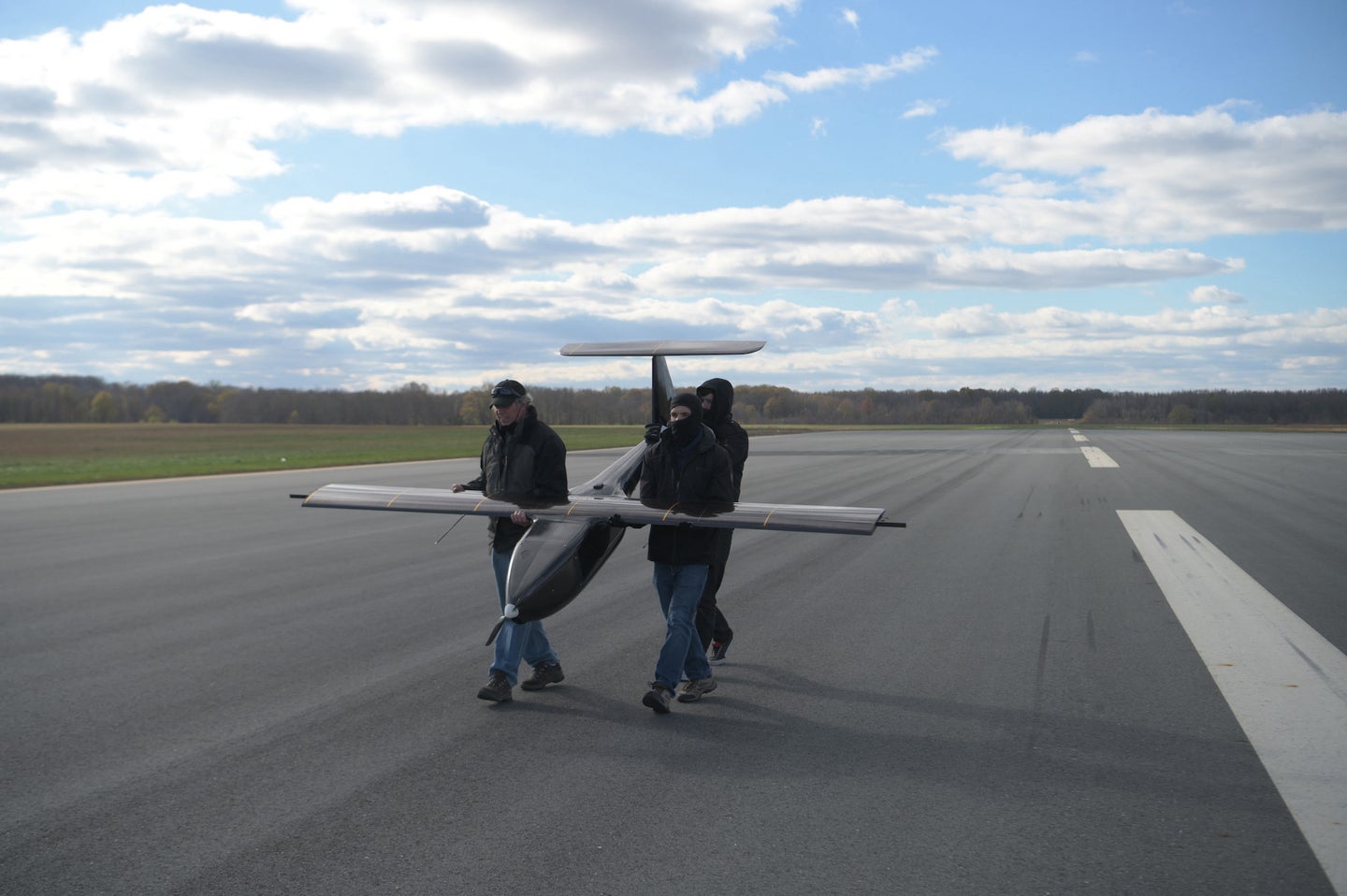 The Hybrid Tiger on Nov. 18 in Maryland. Jonathan Steffen / US Navy
SHARE

With a clattering on the asphalt runway, the Navy’s Hybrid Tiger drone quickly hauled itself into the sky. It then remained airborne for at least 24 hours, even as the temperatures dipped below freezing in the sky above the Aberdeen Proving Ground in Maryland.

Drone flights generally aren’t remarkable, but this one was for a simple reason—the entire time the Hybrid Tiger was in the sky, it drew power from two distinct systems: solar panels in the wings, and a compact hydrogen fuel cell in the body.

The flight marked a major milestone for the program from the US Naval Research Laboratory, a sign that the drone is at least half as capable as intended. Hybrid Tiger’s successful day in the air started November 18, 2020, although the Navy announced the success in mid-April.

“The flight was effectively a performance test in worst-case conditions: temperatures falling below zero degrees Celsius, winds gusting to 20 knots, and relatively little solar energy as we approached the solar solstice Dec. 21,” said Richard Stroman, a mechanical engineer from the NRL Chemistry Division, in a release. “Despite all of that, Hybrid Tiger performed well.”

A typical long-endurance drone, such as an MQ-9 Reaper, stays aloft for hours and hours by burning hundreds of gallons of jet fuel to power an engine, which in turn drives the Reaper’s pusher propeller. Noise from this engine gives the Reaper its distinctive loud buzz, a sound that is conspicuously absent from the Hybrid Tiger.

While flying, the Hybrid Tiger had to make due with the sunlight it could grab and the onboard hydrogen. “Relatively little” solar energy is not none, and the Hybrid Tiger’s thin but powerful photovoltaics are built to sustain it even on minimal power. A 2018 paper on the drone highlights the efficiency of the thin-film solar arrays on the drone’s wings. The arrays, two on each wing and one on the tail, weigh in at a total of 2.2 pounds, or about 5% of the drone’s total weight.

It has a small airframe, with just a 24-foot-long wingspan and a maximum takeoff weight of only 55 pounds. From that body, the US Naval Research Lab hopes to eventually coax flight times of over 48 hours, reaching a distance of around 1,150 miles.

Other solar-powered drones explored by the Navy have flown at altitudes above 9,000 feet, where clouds are rarely dense enough to obscure incoming sunlight and the winds are consistent. The Hybrid Tiger, instead, operates below that threshold, drawing power in part from rising warm air in thermals, like vultures or condors do. Soaring algorithms, developed for just this purpose, can help keep the drone aloft while minimizing the energy expenditure needed to do so.

Further powering the Hybrid Tiger is the hydrogen fuel cell, large enough for 14 gallons of hydrogen. The paper describes the watt-hour efficiency of the fuel cell as five times greater than that of lithium-ion batteries at the same weight.

In contrast to pure solar-powered craft, the hydrogen fuel cell works well at night, supplementing the Hybrid Tiger’s power and keeping it aloft until daylight can bring the return of solar electricity. Like the soaring algorithms, the promise is that smart energy management—from temperature to altitude to route—will autonomously ensure the drone can stay airborne for at least a day. Altogether, the package is designed for an aircraft that can remain in the sky while expending as little energy as possible. A presentation from 2018 suggested this could yield stretches of flight 70 miles long without the drone needing to use its motor.

When Hybrid Tiger was first announced in 2017, the aim was for an ambitious flight time of 3.5 days, though that appears to have been scaled back since. Janes, a defense publication, also reported at the time that the eventual design of the drone was to include “a small intelligence, surveillance, and reconnaissance payload.”

In fact, Hybrid Tiger was born as a scout and a spy. The 2021 release mentions only a payload, without reference to any sensors, but it’s easy to see the scouting mission in the drone’s body, even if it is not the most publicly advertised part of the craft.

Hybrid Tiger borrowed its fuel cell, airframe, and much of its inspiration from Ion Tiger, a hydrogen fuel cell drone developed by the Navy from 2009 to 2013. Ion Tiger reportedly flew for about 48 hours in 2013. It was built to carry a camera, capable of both daytime and infrared video capture, as well as a communications relay. This design is, broadly, the standard sensor package on scouting drones of its era, and likely continues to the Hybrid Tiger form.

Nearly two decades into development, the Hybrid Tiger appears to demonstrate its fundamental promise: a long endurance drone with minimal fuel needs, capable of operating in a range of weather conditions, silently observing the world below. If the testing continues to be successful, and if the drone’s special combination of power sources can be built affordably at scale, the future of scout drones is a quiet one, as flying cameras with silent engines sip power from the sun and surveille the world for days at a time.