Australian soldiers are testing out stealthy e-bikes for scouting missions

Quiet bikes like these are a new way of carrying out the age-old battlefield task of reconnaissance. 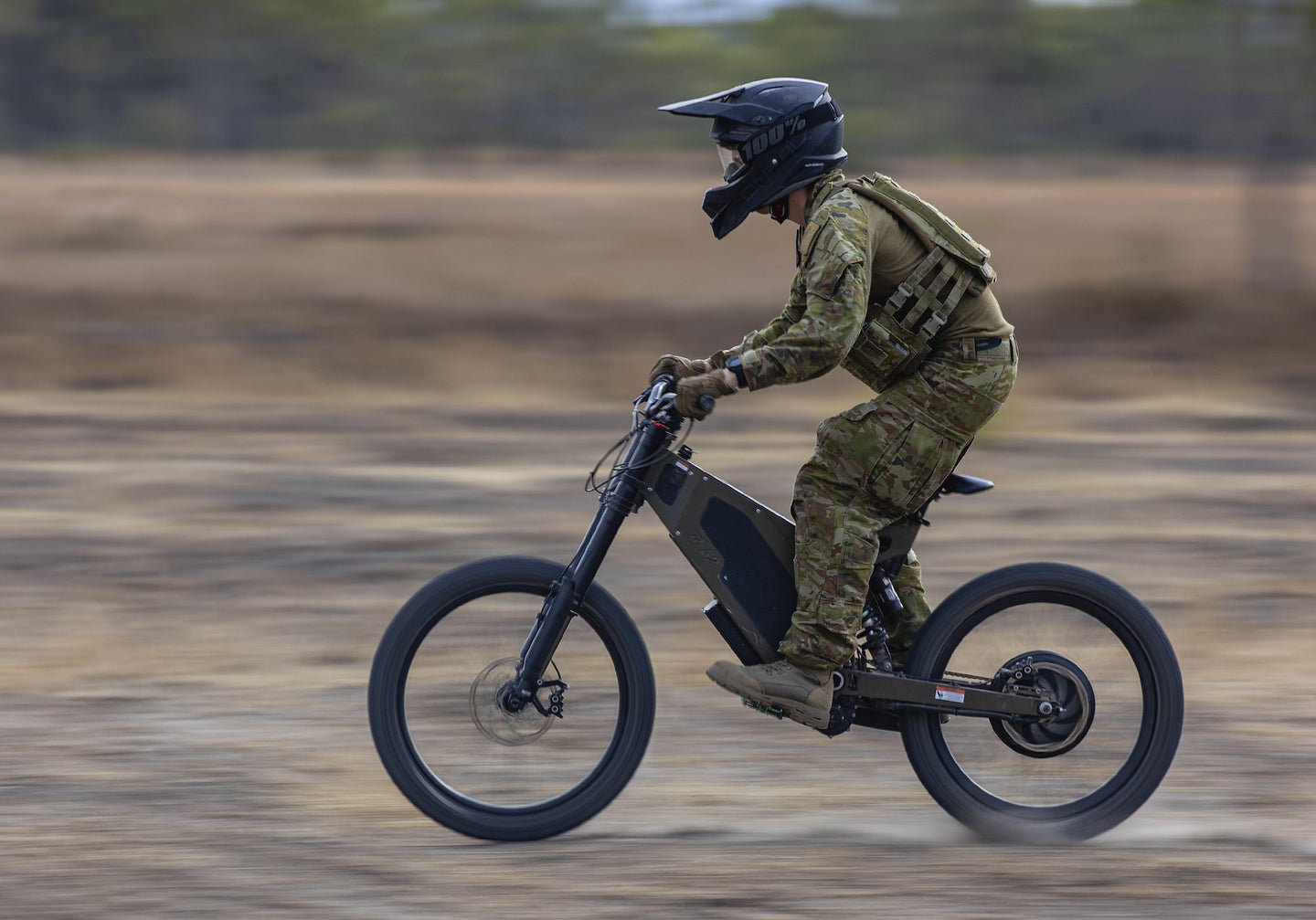 In the scrubgrass of Queensland, the cavalry speeds silently through the woods. Wearing combat fatigues, motocross helmets, and goggles, two scouts from the Light Horse Regiment with Queensland Mounted Infantry roll through light brush and narrow paths, beneath the canopy of trees. But they’re not riding horses—they’re on e-bikes. The scouts (seen in a video, at bottom) are demonstrating a new answer to an ancient military question: how can soldiers move without being detected?

For centuries, seeing where the enemy is without being caught was the primary form of military intelligence. Human scouts, on foot or horseback, would advance beyond the main formations of an advancing army, looking for the telltale signs of a mass of armed people. In modern times, that task has expanded to include work done from vehicles on land, sea, air, and satellites in space, but the human scouts haven’t been forgotten. With the scouts seeing immediately ahead, a moving column of troops can avoid danger or prepare for an ambush.

For a unit moving by armored transports, scouting can be tricky. The armored vehicles are large and loud, giving away their position through noise as much as size. Motorcycles, which have a long history in war, are nimble and fast, but their engines scream, and exhaust too can reveal a position. In the trial, the bikes also scout paths for armored vehicles, like checking to see if a stream could be cleared by larger troop transports.

“The footprint [with e-bikes] is minimised due to less power, less noise, and you’re not kicking up much dust that could be seen by enemy forces,” corporal Thomas Ovey of the Queensland Mounted Infantry said in a release. “It’s much more effective than a standard motorbike.”

[Related: The best electric bikes for an easier ride]

The e-bikes used have a top speed of 55 mph and a range of 62 miles. For a scouting run, that means the bikes can cover 30 miles in just over half an hour, and then return back to the unit before the bikes run out of charge. Even then, the fact that it is a bike means soldiers could still pedal it to its destination.

With that range, and with the quieter profile provided by electric motors, the bikes could also work as battlefield couriers.

“It allows us to do safe-handing of information, whether that’s information people have found on the battlefield, or even if one of the troops takes photos on their phone and wants to send it back to headquarters,” Ovey said. “They’ll call us up, we’ll get the stealth bikes out, head down there and grab the information. It’s a lot quicker. We cover more ground much faster, and it saves time instead of waiting for troops to come to us when they’ve found something.”

[Related: A Silent, Hybrid Motorcycle For The U.S. Military]

In a 2014 program seeking to build a silent motorcycle, DARPA set a threshold for the bikes at 55 decibels when running on electric power. That’s louder than a conversation in a house but quieter than an air conditioner 100 feet away, so not exactly quiet, but quite enough.

The Australian Department of Defence did not name the model of e-bike used, nor give a decibel read for the engine. Without that, it’s hard to say how quiet the bikes are in the abstract, but it’s safe to say they are quieter than gas-powered vehicles. More importantly, they are quieter than the sounds around them in the field, especially in rough terrain and with some ambient natural noise.

It remains to be seen if Australia will adopt e-bikes into their forces. As the country continues a process of modernization for possible Pacific warfare, past experience shows that bikes provided a valuable edge to militaries that could use them en masse in the eastern Pacific.

Historically, perhaps the most famous bicycle-driven military feat was the Japanese capture of Singapore in WWII, in which lightweight and silent bikes allowed soldiers to advance faster than anticipated over streams and rough terrain.

Much of war has changed since the 1940s. Yet the utility of lightweight, fast, and flexible transportation, carrying everything from scouts to confidential information, remains valuable. Ebikes might offer the outward appearance of a more sustainable approach to war, but at heart they’re a new approach to an old kind of stealth.

Watch a promotional video about the bikes below: