What Do You Listen To During A Year In Space? 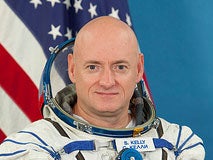 Astronaut Scott Kelly—twin brother to Mark and current commander of the International Space Station’s Expedition 45 crew—has now spent more than 380 days consecutively in space, and holds the record for most time spent off the planet by an American citizen.

That is a lot of time away from pop culture and the earworms of current radio, so we’ll forgive Kelly if his recently released Spotify playlist, titled ‘Songs of a Year Spent in Space’, skews a bit towards ‘dad rock’ and away from whichever OVO jam debuted on SoundCloud last week.

Kelly’s two-hour-plus mix, though, is catchy! He followed all the rules outlined by High Fidelity‘s Rob Gordon for how to construct the perfect mixtape, which is an art form:

Kelly starts off with a bang with a nod to Rihanna (Jasmine Thompson’s cover of ‘Stay’), Eminem’s ‘Lose Yourself’, ‘These are the Days’ by 10,000 Maniacs, Coldplay (‘Speed of Sound’), and an appearance by Mr. Worldwide and Xtina with ‘Feel This Moment.’

But just as the tape clears the auditory mesosphere, Kelly shuts off the jets and cools out with some John Lennon (‘Imagine’), Snow Patrol (‘Chasing Cars’), and James Taylor (‘Fire and Rain’, which to be honest, adds a touch of morbidity to the mix). He has essentially turned ISS into a mobile Starbucks.

Kelly also includes a few other ‘dad rock’ touches with Pearl Jam’s ‘Black’, ‘Hotel California’ by the Eagles, Pink Floyd’s ‘Wish You Were Here’, and a back-to-back doozy of Christina Perri (‘A Thousand Years’) and Fleetwood Mac (‘Landslide’). Kelly is understandably busy working, and these are great jams for spacing out and concentrating on harvesting space-grown lettuce and keeping up with social media trends.

Like anyone who spent time making, and remaking, mixtapes, Kelly knows it is important to end with a strong track. Kelly is a born-and-raised Jersey boy, and the final track is perfect: ‘Thunder Road’, the quintessential Bruce Springsteen song. I imagine that as Kelly flies thousands of miles above us, he practices his air saxophone when the Big Man kicks in during the song’s final minute.