What Are You Doing For Thanksgiving?: Scott Kelly And Kjell Lindgren 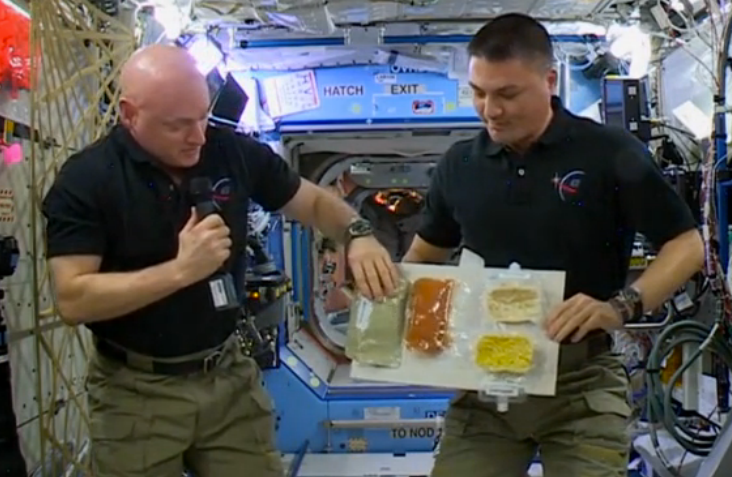 NASA astronauts Scott Kelly and Kjell Lindgren are spending Thanksgiving far away from home — they’ll be in orbit aboard the International Space Station. This week they shared their Thanksgiving plans in a video message.

“We just wanted to wish you a very warm and happy Thanksgiving,” Lindgren said in the video. “We are incredibly thankful for the opportunity to be up here on the International Space Station, working and living in this amazing orbiting laboratory — a physical manifestation of what is possible when great countries work together with communication, cooperation, and collaboration towards peaceful means, to perform research that benefits humanity back on the Earth.”

The astronauts will have the day off and watch some football, said Kelly, before digging into their Thanksgiving meal. Popular Science spoke with NASA public affairs officer Daniel Huot to learn more about the food Kelly and Lindgren will be eating.

What’s on the ISS menu for Thanksgiving?

First off, there are three main ways foods are prepared for the flight to space that are also common here on Earth. Irradiated foods are briefly exposed to ionizing radiation so they won’t grow bacteria. Freeze-dried foods have their water removed during packaging. And thermostabilized foods are exposed to heat that destroys bacteria, so the food can then be stored at room temperature.

Irradiated and thermostabilized foods just need to be heated prior to consuming. The astronauts use a small heater onboard for that. With freeze-dried food, the astronauts add water before eating. To learn more, you can watch this video we released on how to prepare Thanksgiving food in space:

What kinds of new foods might ISS astronauts have for future Thanksgivings?

The astronauts all get to add specific food items for their time on orbit. Astronauts from other countries, for instance, typically fly with some of their own local cuisine for sharing. So future astronauts could add a favorite Thanksgiving item if they wanted to!